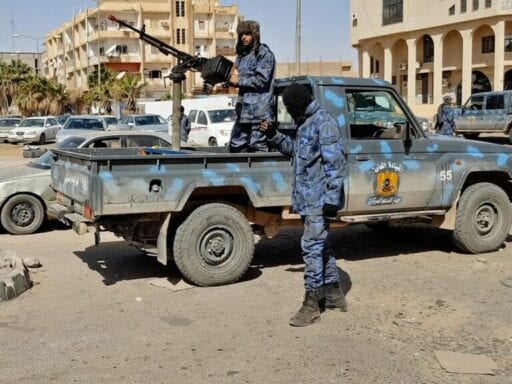 As each side launches air strikes, US troops evacuate the city.

Libyan militias battling for control of the country’s capital, Tripoli, launched air strikes against one another on Sunday, escalating a battle that has raged since Thursday.

The battle began when the Libyan National Army (LNA), a force in control of most of Eastern Libya, launched a surprise offensive on Tripoli. That attack threatens to reinvigorate the armed conflict in a country marred by instability since former dictator Muammar Qaddafi was deposed in 2011.

The LNA is led by General Khalifa Haftar, who fled to the US after his first failed coup attempt against Qaddafi. Haftar launched the latest attack in hopes of fulfilling a promise to unite Libya under his control.

Standing in his way are armed factions defending the capital and its internationally recognized, UN-backed government, the Government of National Accord (GNA).

The LNA first advanced on the southern and western outskirts of the capital in an assault that left dozens dead and many more wounded, the BBC reports. Haftar claimed to have seized Tripoli’s airport — which is roughly 15 miles from the center of the city — in the LNA’s first strike, but fighting is reported to have continued there through Sunday.

Colonel Mohamed Gnounou of the forces loyal to the GNA said on Sunday his troops plan on “purging all Libyan cities of aggressor and illegitimate forces” in a counteroffensive called “Volcano of Anger.”

This counteroffensive continued as tensions further escalated Sunday when LNA forces unleashed air strikes on the city’s suburbs. Those airstrikes were met in turn with airstrikes by GNA forces.

The air strikes come in spite of calls from the United Nations asking for a two-hour truce to help evacuate citizens and wounded fighters.

UN Secretary-General Antonio Guterres was in Tripoli on Friday preparing for talks scheduled for next week that were meant to lay the groundwork for democratic elections. Later in the day, Guterres tweeted that he was leaving Libya “with a heavy heart” as violence intensified.

I leave Libya with a heavy heart and deeply concerned. I still hope it is possible to avoid a bloody confrontation in and around Tripoli.

Haftar, a 75-year-old general who once served under Qaddafi, returned to Libya in 2011 to aid in the revolution against the dictator.

After Qaddafi was deposed, Haftar eventually became the leader of militia forces controlling the country’s eastern region. He’s a staunch anti-Islamist general backed by Egypt and the United Arab Emirates. Haftar has also received aid from Russia and from France, which partnered with the general in hopes he could help slow African immigration. Despite this support, there are lingering worries that Haftar could turn out to be little more than a Gaddafi 2.0.

The Washington Post’s Fahmi Hussein and Sudarsan Raghavan filed a dispatch from the city of Misurata on Saturday, where militia forces who say Haftar reminds them of Qaddafi claimed to have deployed hundreds of truckloads of fighters to help in the fight against Haftar.

Many Misurata residents — and the city’s militias — despise Hifter and view him as another dictator in the making. Militias from other pro-government cities such as Zintan also moved into Tripoli, according to photos posted on social media.

In Misurata, a radio station sent out a rallying cry to listeners: “Everyone who owns a gun please go to Tripoli right away to fight for your country against Hifter.”

As the fighting continues, US troops stationed in Tripoli were ordered to evacuate the city. The US Africa Command announced Sunday it planned to relocate a contingent of US forces due to “increased unrest in Libya.”

“The security realities on the ground in Libya are growing increasingly complex and unpredictable,” Marine Corps Gen. Thomas Waldhauser, the head of US Africa Command, said in a statement. “Even with an adjustment of the force, we will continue to remain agile in support of existing US strategy.”

Greek life is losing members. Here’s why.
It’s easy to assume pawnshops are doing great in the pandemic. It’s also wrong.
How we know ending social distancing will lead to more deaths, in one chart
5 winners and 3 losers from Joe Biden’s inauguration
Prolonged school closures could be very costly for America’s students
Supreme Court says American Express contract with merchants does not stifle credit card competition