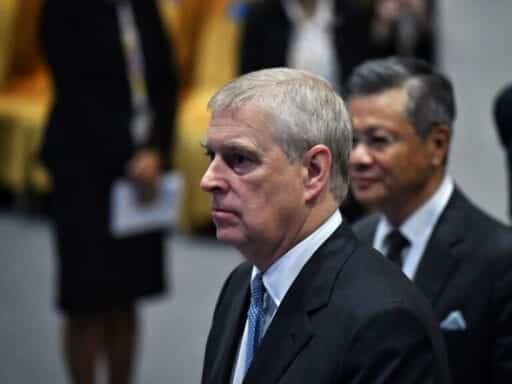 Andrew rejected allegations of sexual misconduct in Epstein’s company by arguing a pizza party and an inability to sweat prove his innocence.

The United Kingdom’s Prince Andrew sat for an interview with the BBC’s Emily Maitlis that aired Saturday, and attempted to explain his relationship with financier and convicted sex offender Jeffrey Epstein — but offered little in the way of clarity. Rather, Prince Andrew, the third child of Queen Elizabeth II and Prince Philip, was rambling and inconsistent in the face of pointed questions about his actions and affiliations.

Andrew has faced renewed questions about his relationship with Epstein following the financier’s death in August. At the time, Epstein was in jail, facing sex trafficking charges. Andrew, a longtime friend of Epstein’s, has himself been accused of being involved with girls trafficked by Epstein; it remains unclear, however, how much the prince knew about Epstein’s illicit activities.

One of Epstein’s accusers, Virginia Roberts Giuffre, has said the prince had sex with her a number of times when she was 17-years-old. Andrew has directly denied this, and during the interview, made a series of odd statements in his attempt to poke holes in Giuffre’s narrative, including claiming he’d lost the ability to sweat (Giuffre claimed he was “profusely sweating” while dancing with her in 2001 before a sexual encounter) and that he could not have had sex with Giuffre on one of the dates she claimed because he’d taken his daughter for pizza (and he remembers this because “going to Pizza Express in Woking is an unusual thing for me to do”).

Andrew added that he has “no recollection” of meeting Giuffre, but refused to commit to testifying under oath about the matter, saying he would do so only “if push came to shove and the legal advice was to do so.”

Given the FBI is currently investigating Epstein and his associates, the prince may find himself asked to offer testimony; Epstein’s former legal counsel Alan Dershowitz (who has also been accused of sexual misconduct) has said Andrew would be forced to speak with the investigators should they call him in.

Prince Andrew struggled to defend his relationship with Jeffrey Epstein

Before discussing the Giuffre allegations, the BBC interview centered on Andrew’s relationship with Epstein.

While Epstein was awaiting trial when he died, he had been incarcerated before, after facing accusations of abusing dozens of underage girls. In 2007, he was required to register as a sex offender, and Maitlis asked Andrew why he contiuned to visit Epstein and stay at his home knowing this.

Andrew said he visited — and stayed at Epstein’s home — in 2010 in order to, as he put it, “break up the friendship.” However, he could not explain why he stayed with Epstein in New York after the break-up conversation — a conversation during which they were notoriously photographed together. He said Epstein’s home was a “convenient place to stay” and chalked his staying there to his “tendency to be too honorable.”

He also blamed his framing of Epstein’s sex crimes during the interview on this same tendency.

“Do I regret the fact that [Epstein] has quite obviously conducted himself in a manner unbecoming? Yes,” Andrew said.

“Unbecoming?” Maitlis asked. “He was a sex offender.”

“Yeah, I’m sorry, I’m being polite,” Andrew said. “I mean in the sense that he was a sex offender. But no, was I right in having him as a friend? At the time, bearing in mind this was some years before he was accused of being a sex offender.”

The prince went on to say he regrets not having avoided Epstein following his entrance to the sex offender registry, saying, “I kick myself for on a daily basis because it was not something that was becoming of a member of the Royal Family and we try and uphold the highest standards and practices and I let the side down, simple as that.”

In-depth interviews are uncommon for the UK’s royal family, especially when its members are on the defensive. And many in the media and the public argued Andrew’s choice to sit for the interview was deeply unwise — in fact, the reception to the interview has been overwhelmingly negative.

Many have scoffed at his Pizza Express alibi; the Guardian’s Catherine Bennett argued it eclipsed Princess Diana’s oft-criticized 1995 Panorama interview as the “most catastrophic, ill-advised royal broadcast ever made;” and Charlie Proctor, the editor of a news site about the royal family, called it, “a plane crashing into an oil tanker, causing a tsunami, triggering a nuclear explosion level bad.”

Jeffrey Epstein died of suicide in August awaiting trial for sex trafficking, but his death has not ended questions about his known and alleged crimes or the network of people around him. In fact, at the state, federal, and international levels, investigations into the allegations he faced at the time of his death continue.

It is not yet clear what role, if any, Prince Andrew will play in those investigations or in court cases surrounding them. However, two other high profile Epstein associates: his legal adviser Alan Dershowitz and his long-time girlfriend and alleged “fixer” Ghislaine Maxwell face legal action.

It was through Maxwell that Andrew says he was connected to Epstein; he told the BBC because he was friends with Maxwell, it was “inevitable that [Epstein and I] would have come across each other.”

Come across each other they did, and as Vox’s Jane Coaston has explained, Epstein and Andrew became quite close, with the prince spending time on the financier’s private island and, of course, allegedly having sex with Giuffre:

Epstein and Prince Andrew were so close that the Duke arranged for Epstein to help pay off $15,000 in debts owed to a former personal assistant of Prince Andrew’s former wife, Sarah Ferguson — an arrangement that took place several years after Epstein was already a convicted sex offender. In 2011, Ferguson admitted to the arrangement, telling the Daily Telegraph, “I am just so contrite I cannot say. Whenever I can I will repay the money and will have nothing ever to do with Jeffrey Epstein ever again.”

According to claims made by Giuffre in court proceedings and elsewhere, Epstein forced her to have sex with Prince Andrew on multiple occasions in New York, London, and on Epstein’s private island, Little St James, while Giuffre was underage. And while Prince Andrew has denied the allegations, flight logs released in 2015 backed up Giuffre’s claims and the Duke and Giuffre were photographed together (though supporters of Prince Andrew say the photograph is fake.)

It was reportedly taken in Maxwell’s London home, and she can be seen in its background. Despite describing his friendship with Maxwell, Andrew worked to distance himself from her during the interview, saying, “If there are questions that Ghislaine has to answer, that’s her problem I’m afraid.”

There, of course, remain many questions for Prince Andrew as well. The interview answered none of them, particularly those around his relationship with Giuffre. Whether they will be answered through legal means remains to be seen.

Watch: Kate McKinnon’s Ruth Bader Ginsburg “Gins-burns” Kavanaugh on SNL
Why the US ambassador to Germany is now also the new acting head of US intelligence
Florida man who killed black man in parking lot charged with manslaughter
Why your pet is acting like a weirdo during quarantine, explained by animal behaviorists
The 2020 Cannes Film Festival is postponed due to coronavirus
Singapore’s Covid-19 case fatality rate is remarkably low. Why?