A product for new moms used the word “vagina” in ads. It turns out that’s still controversial. 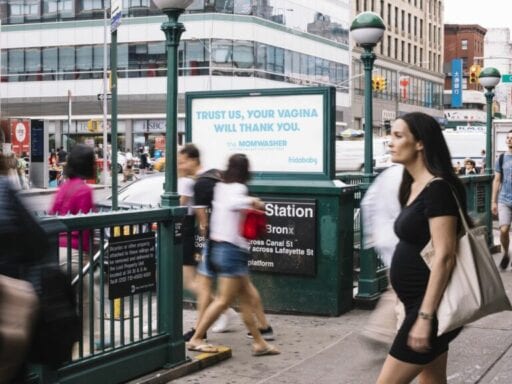 A company tried to place ads for its “Momwasher” product in several cities and failed.

There are more than 20 vaginas prominently displayed all over New York City — the word “vagina,” that is. Ads for a product called the Momwasher are sprinkled on billboards near subways in several different neighborhoods. They read: “Trust us, your vagina will thank you.”

The Momwasher, sold by a company called Fridababy, is a better-designed version of a postpartum necessity that all new moms are sent home from the hospital with after giving birth: the peri bottle.

The perineum goes through a lot of trauma after vaginal childbirth, which can include tearing, the need for an episiotomy, and hemorrhoids. This all makes going to the bathroom and cleaning up afterward a painful and challenging experience for several weeks. Using a peri bottle to squirt some water onto the outer genitalia can help ease burning caused by urine and provide an alternative cleansing method to rough toilet paper. It’s a very practical item!

But it’s not the product that’s getting attention — it’s the way Fridababy is marketing it. And the controversy ties into a long history of society being squeamish about anything involving vaginas, periods, or the mechanics of a woman’s physical sexuality, including in advertising.

Peri bottles are clear plastic bottles that look like the squirt bottles that vinegar and oil come in at salad bars. They cost about $4 on Amazon and usually are given to new moms who give birth in the hospital. Chrissy Teigen, a hero of the Everywoman who is not afraid to talk frankly about perineal distress, tweeted back in 2016 that she was buying herself a “push present,” accompanied by a picture of one of these clear plastic peri bottles.

The Momwasher costs $15.99, but Fridababy has improved on the design to work with gravity better. The nozzle is tilted upward at a sharp angle to make it easier to hold and squirt. The device is marketed on the website with cheery colors and uses cutesy cartoon characters in a way that calls to mind spa brand Bliss and its ’90s “Bliss Girls,” seemingly aiming to make perineal cleansing a cozier experience. It seems like a stretch, but anything that can improve that unpleasant, messy process would be an improvement. The billboards are an extension of this advertising.

(Just to be fully anatomically correct here, the vagina is actually the internal muscular canal through which the baby travels to be born. The outer genitalia consists of the introitus, which is the opening to the vagina, and the labia and perineum. But the word “vagina” is often understood these days to mean women’s genitalia generally in the popular vernacular.)

When trying to place the ads, the company received pushback from some cities, according to copies of emails sent to Vox by Fridababy (and which have been reported on over the last week at large national outlets like the Today show). One email from a company in LA said, “We would need to see the artwork, but I would suggest not using the word vagina in the copy. Could they use bottoms?” Another one said, “We’ll take it if they will change the word ‘vagina’ to ‘body’ or something similar.”

“Our mission at Fridababy is to prepare parents for the unsexy, unfiltered realities of parenthood. We wanted to have an honest dialogue about what a woman’s body, and more specifically her vagina, goes through after delivery without skirting around words,” Fridababy founder Chelsea Hirschhorn, who gave birth to her third child about a month ago, said in an email to Vox. “Peeing will burn and sitting like a normal person will feel like a herculean accomplishment. There’s no reason we should be tiptoeing around this conversation.”

Fridababy certainly has been savvy about the product. It sent personalized Momwasher products to two of the most authentic-seeming and open celebrities on the planet, Cardi B and Chrissy Teigen. They both posted about the products on their respective Instagram stories, which Fridababy has been proudly sharing with the press.

Tiptoeing around any conversation surrounding vaginas is the norm, though, and other companies that make products marketed to women have had similar experiences. The New York City subway system, by dint of being very extensive and also in the middle of a fairly progressive city, has become a proving ground for envelope-pushing advertising over the past few years.

Thinx, the company that makes period underwear (a washable product that absorbs menstrual blood and wicks it away from the body), prompted a national conversation with its ad campaign back in 2015. The ads read, “Underwear for women with periods” and included pictures of grapefruit sections that looked a lot like a woman’s external genitalia. They were originally banned by the authority in charge of advertising on the subway, but after Thinx started talking to the press about it and highlighting “risqué” ads for breast enhancement and lingerie that the agency had greenlit, the ads eventually got approved and were papered onto seemingly every available subway surface, including entire stairways.

The way advertisers have talked about periods and products for them has always pussyfooted (ha) around the issue. That bright blue fluid used to saturate pads on TV? Obviously not very realistic or straightforward, since no woman’s period looks like Windex.

And vaginas themselves, once treated as objects of worship, are now something to be whispered about, as the Independent documented in 2012. Back in 2010, Kotex, a company that makes feminine hygiene products, produced several TV commercials mocking the evasiveness of menstrual product ads that had been perpetuated for decades by companies, including itself.

They were banned by three commercial TV networks for using the term “vagina,” according to a New York Times story written at the time. “Merrie Harris, global business director at JWT, said that after being informed that it could not use the word vagina in advertising by three broadcast networks, it shot the ad cited above with the actress instead saying ‘down there,’ which was rejected by two of the three networks,’” the story noted.

In 2012, an ad for Carefree panty liners aired on Australian television stations and received complaints from viewers and family-oriented organizations. Speaking in a straightforward tone of voice and looking directly at the camera, a young woman says, “Even that bit of discharge in between our period is our body working to keep the vagina healthy.” One complaint said, “I understand it can be used in medical discussions but it’s not appropriate in an ad when young ears are listening.”

Compare this to the slew of men’s health startups that have been advertising in a similar way, with a different outcome. Hims, a brand that offers erectile dysfunction meds via telemedicine, as well as skin care and hair loss treatments, papered the NYC subways with images of droopy and proudly erect (and frankly phallic) cacti. Roman, another company offering erectile dysfunction meds, used copy rather than imagery to get its message across by essentially repeating the phrase “erectile dysfunction” prominently and frequently. Outlets pointed out the seeming double standard of these ads, since the subway system seemed to have no problem approving them.

“My first thought was, ‘Seriously? In this day and age? A person cannot say vagina without it being a bad word?’ I thought we’d gotten over that with the Vagina Monologues, but we clearly haven’t,” Priya Raghubir, a professor of marketing at the NYU Stern School of Business, says of the Momwasher controversy.

Sex always sells, she notes. But these latest ads aren’t about sex, and that’s ultimately why they seem more radical. Sure, they’re about a sex organ, but there’s no male gaze in these ads. It’s women speaking to women and setting a new frank tone in the messaging.

And maybe it’s a sign that the advertising landscape — and society as a whole — is finally changing. After all, hundreds of thousands of women proudly marched in “pussy hats” almost two years ago. And as women’s health issues come to the fore politically and access to women’s health care is increasingly threatened, more people, including celebrities like Serena Williams, are comfortable speaking out about these issues, and companies are picking up on this frankness.

So while the world is not quite ready for an onslaught of vagertising, Fridababy’s latest ads may at least advance the conversation a bit. As founder Hirschhorn says, “Vagina is an anatomical term, not a dirty word.”

What to expect at Trump’s Senate impeachment trial
Sitcoms usually get meaner as they get older. Not Brooklyn Nine-Nine.
What Trump hasn’t done — and should do — about coronavirus, explained by an expert
Inside the secretive Silicon Valley group that has funneled over $20 million to Democrats
Latino voters might have saved Bernie Sanders’s campaign
Kirsten Gillibrand gave her opponents a history lesson on abortion politics at the debate