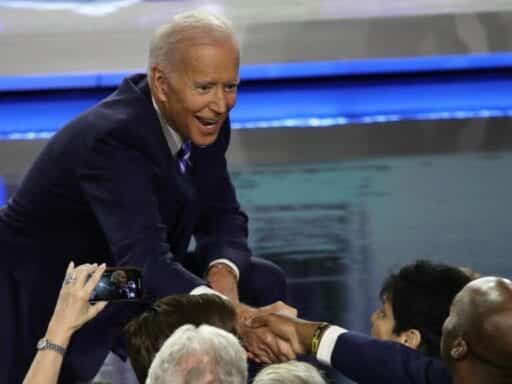 He cited a bad deal with Mitch McConnell as a legislative success story.

Thursday night’s Democratic presidential debate featured a number of high-profile, attention-grabbing clashes between former Vice President Joe Biden and his various challengers. But there was also a quieter clash, initiated by Colorado Sen. Michael Bennet, that fell a little flat as television drama but deserves attention.

Biden touted his record cutting deals with Republicans, a central theme of his campaign, and pointed to a specific example of his success. On the morning of New Year’s Eve 2012, Biden helped the administration reach a deal with Republicans on a confusing package of taxes and spending. Bennet countered Biden’s recollection, arguing the outcome was simply a bad deal that Biden ended up foisting on his Democratic colleagues.

In narrow horse race terms, this is probably not a huge vulnerability for Biden. For starters, even though it happened relatively recently, the drama is a little obscure because most people were not paying attention to politics on New Year’s Eve 2012. It also involves some tedious budget technicalities. And last but not least, Biden was clearly operating as a member of the Obama White House on this, and his big political vulnerabilities come on topics where he’s differed from Obama.

Nonetheless, it’s critically important as a substantive issue. It’s one thing to charge Biden with having an unrealistic theory of change — after all, everyone in the field is promising to deliver more than they really can. But the charge leveled by Bennet is different. His argument isn’t about whether Biden is promising deals he won’t be able to cut but that Biden will cut deals that shouldn’t be made. It’s a serious charge and worth reviewing the details.

The issue at hand was an event dubbed by the political press at the time as the “fiscal cliff.”

This cliff was the combination of three separate things. One was that the Bush tax cuts, originally scheduled to expire in 2010, had been extended by two years during a lame duck congressional session and were now set to expire at the end of 2012. The other was that unemployment insurance benefits, which had been repeatedly extended in response to the Great Recession, were once again scheduled to expire. A third was that a temporary payroll tax cut, enacted to help fight the recession, was scheduled to expire.

It was generally understood that this hefty dose of austerity budgeting was set to hurt the economy.

But there was also a longer-term political fight underway about the Bush tax cuts. When these were enacted way back in 2001 they were scheduled to automatically expire as a kind of gimmick to allow them to qualify for the budget reconciliation process. From the beginning, however, Republicans intended to extend them permanently.

Republicans, however, repeatedly refused to pass bills that would do this partial tax cut extension. Their plan was to force a hard choice on Democrats — either the rich got their tax cut, or else middle-class taxes would rise. It was a bold, daring squeeze play on the part of the GOP. And in the insecure mood of winter 2010 after landslide GOP midterm victories, Democrats got scared, backed down, and agreed to a two-year extension.

But Christmas season of 2012 had a different mood. Obama had just been reelected. Democrats picked up two Senate seats. Democrats won a majority of the House vote, and though gerrymandering prevented them from securing a majority of House seats, they did pick eight up. The GOP squeeze play had, fundamentally, failed on Election Day.

And liberals felt it was time to press the advantage and let all the tax cuts expire. Once the new baseline was in place, in their view, they could introduce new legislation that cut middle-class taxes and dare the GOP to oppose it. But instead, at the last minute, Joe Biden and Senate Minority Leader Mitch McConnell cut a deal.

The deal nobody can quite explain

The way Biden described this deal was very simple: “I got Mitch McConnell to raise taxes $600 billion.”

That would be quite the achievement but it’s not what happened. What Biden got, instead, was an agreement for McConnell to support a partial extension of the Bush tax cuts except for tax cuts that would apply only to families that earned over $450,000 a year.

In exchange, McConnell also agreed to a one-year extension of unemployment insurance benefits.

The deal came together very suddenly during a holiday period when most people weren’t paying attention to politics and much of the press was gone on vacation. I happened to be working at the time, however, and when news of the deal broke, I remember it as being one of the oddest stories of my career.

Senate Majority Leader Harry Reid publicly supported the deal but was privately furious about it, and described the White House as having thrown his caucus under the bus for no reason. In a recent article, the Intercept’s Ryan Grim recounts Reid’s current recollection of the story with Biden cast specifically as the villain.

My recollection of what Reid was saying at the time pointed fingers more generally at the White House, but it’s basically consistent. The strange thing is that at the time my sources in the White House were pointing their finger at Senate Democrats — who they said were panicking and on the verge of caving until the White House was able to cobble something together at the last minute.

I couldn’t figure out what had actually happened and to the best of my knowledge nobody ever really has. Regardless, America ended up with a deal that both Reid and Obama publicly supported even while their staffs were complaining bitterly about it.

Yet Thursday night, it was a point of pride for Biden.

This was a very bad deal

Bennet, who was one of only two Senate Democrats to actually vote no on the deal, recalled it differently.

“The deal with Mitch McConnell was a complete victory for the Tea Party,” he said. “We had been running against this for 10 years. We lost that economic argument because that deal extended almost all those Bush tax cuts permanently and put in place the mindless cuts we still are dealing with today that are called the sequester. That was a great deal for Mitch McConnell and a terrible deal for America.”

To the best of my understanding at the time, much of the White House staff and the Senate leadership agreed with Bennet that the deal was bad. But some mix of nervous elements among red state senators and in the White House decided to strike it, and once it was struck, few senators felt like being party poopers and voting no.

But not only was the deal kind of bad on the merits, it left Democrats tactically tied up throughout Obama’s second term. Democrats would find themselves proposing to do this or that and wanting to pay for it with higher taxes on the wealthy. Republicans wouldn’t go for that, and then little got done.

Had they gone over the cliff, the strategic situation would have been reversed. Tax revenue would have ended up being higher than even Democrats wanted it to be. And instead of fighting with Republicans about how to pay for new spending, they could have struck deals with the GOP to pair tax cuts with new spending initiatives and created some sense of momentum and progress.

Biden, however, portrays himself not as having extricated Democrats from a jam induced by craven red state senators. He just says he got McConnell to agree to raise taxes which, fundamentally, didn’t happen.

Progressives worry that Biden’s theory of change is real

This all lacks the emotional punch of a school busing or Iraq War dispute.

But it speaks to a very real concern progressives have with Joe Biden, which is that his talk of bipartisanship and getting things done isn’t just unrealistic — it’s actively pernicious.

What if, in a desire to show he’s getting things done and healing the country post-Trump, Joe Biden agrees to advance a lot of bad bills? The same day as the debate, for example, a clutch of 17 moderate House Democrats sent a letter to bank regulators urging a laxer approach to derivatives regulation. And this kind of thing happens all the time, where some kind of corporate interest legislation manages to attract the support of a dozen or two House Democrats who have ties to the interest at stake.

The Obama White House mostly — though not universally — pushed back against this stuff. But if they’d decided not to, they would have “gotten more done.” There would have been less fighting and more dealmaking in Washington. And they could probably even have gotten a progressive priority or two through in the mix.

The Obama administration could, in short, have seen the fiscal cliff deal as a model rather than as a weird one-off. And that’s potentially how Biden sees it and how he plans to govern — a much more important point of contrast with his more progressive rivals than speculating about the differences in hypothetical health care plans.

Americans don’t think like citizens. They think like shoppers.
Is Green Book now the Oscar frontrunner? It’s complicated.
What a 1963 RFK-James Baldwin meeting teaches us about race in Trump’s America
4 winners and 6 losers from Game of Thrones’ disappointing “The Last of the Starks”
Queen & Slim retells the Bonnie and Clyde myth as a story about blackness in America
Amazon has been frustrating during the pandemic, but Prime is more popular than ever