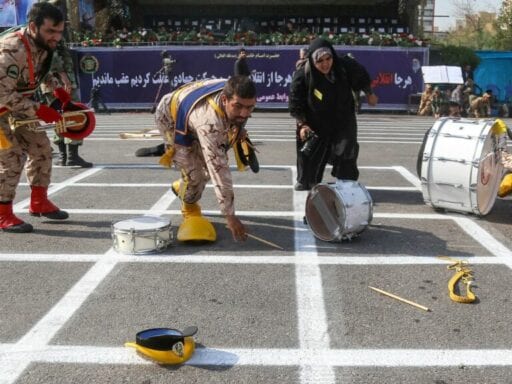 The Iranian government is blaming Arab separatists and the United States.

At least 25 people were killed and 60 others wounded in Iran after militants dressed as soldiers opened fire on a military parade there in a rare brazen terrorist attack on Saturday.

Iranian state-run news outlet the Islamic Republic News Agency (INRA) reported that the death toll is expected to rise after four gunmen fired on the crowd at an annual military parade in Ahvaz in southwest Iran. According to the New York Times, members of Islamic Revolutionary Guards Corps soldiers and civilian attendees were killed and injured, and two of the shooters were killed and the other two captured.

”Terrorists began shooting from a long distance while inside the park, at the armed forces as well as civilians watching the parade,” Brigadier General Abolfazl Shekarch, a spokesman for the Iranian armed forces told MEHR, another Iranian news agency, according to CNN.

But the ultimate blame, the Iranian government says, lays at the feet of the United States and other foreign governments.

“This crime is a continuation of the plots of the regional states that are puppets of the United States, and their goal is to create insecurity in our dear country,” Iranian Supreme Leader Ayatollah Ali Khamenei said in a statement published on his website.

Iranian foreign minister Mohammad Javad Zarif tweeted earlier that “terrorists recruited, trained, armed & paid by a foreign regime” were responsible for the assault. He blamed “regional terror sponsors and their US masters” and promised a swift response.

Terrorists recruited, trained, armed & paid by a foreign regime have attacked Ahvaz. Children and journos among casualties. Iran holds regional terror sponsors and their US masters accountable for such attacks. Iran will respond swiftly and decisively in defense of Iranian lives. pic.twitter.com/WG1J1wgVD9

As the Times notes, Iran’s government often accuses neighboring states, the United States, and Israel of being the culprit of terrorism there.

In June 2017, two simultaneous terrorist attacks were carried out in Tehran that killed 17 people and wounded dozens others. The Islamic State claimed responsibility for those attacks. The AP reports that authorities on Saturday initially described the gunmen as “takfiri,” a term used to describe the Islamic State group. Later, state media and government officials said they believed it was Arab separatists. The Arab separatists have previously only been known for bombing oil pipelines at night.

Brazen terror attacks like this are rare in Iran. There are some similarities between Saturday’s incident and the attacks in Tehran last year, but beyond those, it had been many years since the country witnessed such a deadly attack.

Video posted on social media shows parade attendees running and dropping to the ground as gunfire can be heard in the background.