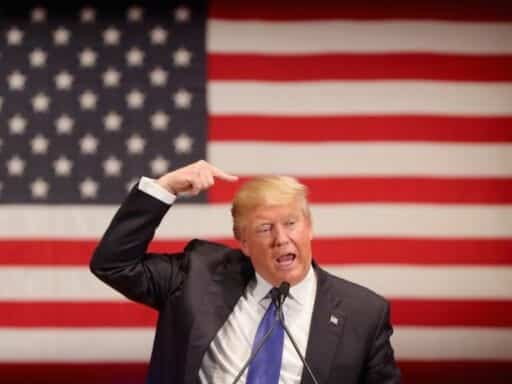 Sarah Sanders says Trump is an “equal opportunity” insulter, but his attacks against black people stand out from the crowd.

During the White House press briefing on Tuesday, Press Secretary Sarah Sanders was asked if President Trump was “singling out” black people and others because of their race after Trump called Omarosa Manigault-Newman a “dog” and a “crazed, crying lowlife.”

When you give a crazed, crying lowlife a break, and give her a job at the White House, I guess it just didn’t work out. Good work by General Kelly for quickly firing that dog!

“What do you say to people who look at the pattern of the comments the president made specifically about African Americans and feel like he is singling those folks out because of their race? Are they missing something? Are they deluding themselves?” asked Jill Colvin of the Associated Press.

Sanders’s defense was, basically, that the president insults everybody: Sanders said that Trump “has said similar things about a number of individuals certainly that are not African-American or any other minority” and that he was “an equal-opportunity person that calls things like he sees it.”

Sanders’ defense of Trump against charges of racism is that he insults everyone, not just black people.

She also cites fact that Democrats took campaign contributions from his as evidence that [checks notes]….. Trump is not racist. pic.twitter.com/c6LFsgNzuc

But Trump has a history of inflammatory statements that utilize racist stereotypes and tropes specifically about black people. According to Eileen Sullivan and Michael D. Shear from the New York Times and David Smith from the Guardian, there’s a key difference between how Trump treats (and tweets about) white and black opponents: Trump belittles his black political opponents with ad hominem attacks. Trump certainly insults everyone — but his jabs at black people are much more dehumanizing, and frequently implies or says that they’re stupid.

While he has certainly bombarded black (and female) public figures with insults on their appearances, Trump most often utilizes the stereotype that black people are stupid in his attacks against his opponents. In June 2016, for example, he said “nobody can be so stupid” as former President Barack Obama.

Trump called Rep. Frederica Wilson, a black House member, “wacky” in 2017 and also took aim at Rep. Maxine Waters in late June, saying Waters, who has repeatedly called for his impeachment and the public confrontation of White House officials, was “an extraordinarily low IQ person”:

According to Philip Bump of the Washington Post, this incident is one of seven times that Trump has said Waters has a “low IQ.” In fact, he has attacked Waters with this insult so frequently, it seems to be “a pejorative that is generally reserved for her.”

Trump more recently took on two black figures in a single tweet. LeBron James spoke about how Trump is using sports and the issue of kneeling during the national anthem to “divide” America during a sit-down interview with CNN anchor Don Lemon on August 3.

Trump quickly responded with a tweet calling Don Lemon “the dumbest man on television” who made “LeBron look smart,” essentially implying that James is also unintelligent. This is the third time Trump has called Lemon some form of “dumb,” according to Smith.

Lebron James was just interviewed by the dumbest man on television, Don Lemon. He made Lebron look smart, which isn’t easy to do. I like Mike!

Though Trump claims he has “always had a great relationship with the blacks,” his Twitter history might suggest otherwise — the fight with Omarosa has just brought it to the foreground.