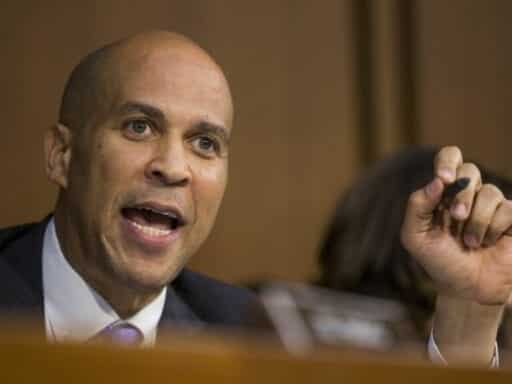 Sen. Cory Booker threatened to release “committee-confidential” emails from Supreme Court nominee Brett Kavanaugh regarding his views on racial diversity in a tense moment during the Thursday morning hearing.

Majority Whip John Cornyn said Booker could be expelled from the Senate for referencing and disclosing emails that only members of the committee had access to. “Running for president is no excuse for violating the rules of the Senate or the confidential documents we are privy to,” Cornyn said in a dig responding to this move.

“All of us are ready to face that rule on the bogus designation of ‘committee confidential.’ Just because there is a Senate rule doesn’t mean it can be misapplied or misconstrued or misused,” Booker said. “We’re dealing here with a lifetime appointment. Nothing we do here is more serious than confirming a justice on the United States Supreme Court. Let the American people appreciate that we are here in the most solemn responsibility we have under the constitution. We need the full truth.”

Booker then tweeted the emails:

These are the 4 documents marked committee confidential that I brought up in my questioning of Supreme Court nominee Brett Kavanaugh last night –> https://t.co/2RZkY2FS9a

The exchange over race that set this whole thing off, explained

Booker’s threat to release emails came the day after he questioned Kavanaugh about the judge’s views on race, during which the lawmaker quoted an email in which Kavanaugh described a policy to advance minority businesses as a “naked racial set-aside.”

In the email, Kavanaugh appeared to be discussing a Department of Transportation regulation that could be perceived as treating businesses differently on the basis of race. “The fundamental problem in this case is that these DOT regulations use a lot of legalisms and disguises to mask what in reality is a naked racial set-aside,” Kavanaugh wrote in the email. This message was one of several that Booker cited on Wednesday to suggest that Kavanaugh does not favor policies for advancing diversity like race-conscious affirmative action.

After he was confronted with this statement, Kavanaugh seemed momentarily confused and asked to see the email — something Booker said he would share at a later time. Sen. Thom Tillis (R-NC) quickly chimed in and seemed to imply that Kavanaugh’s reaction suggested that Booker was mischaracterizing the email. Sen. Mike Lee then went on to reveal that Booker wasn’t misconstruing the message, but he noted that the New Jersey senator was quoting from an email that had been deemed “committee-confidential.”

Much like the term “committee-confidential” implies, any documents bearing this label can be reviewed by members of the Senate Judiciary Committee but cannot be released more broadly to the American public. It’s a term that picked up more traction on Thursday morning — with Democrats questioning why a major swath of documents was being labeled “committee-confidential” and shielded from public view, even though the documents didn’t contain sensitive information related to issues like national security.

The designation itself is not uncommon — for intelligence hearings, for example, a fair share of documents that are classified can be labeled as “committee-confidential.” What is uncommon is the way that Kavanaugh’s documents have been vetted and designated. The National Archives would usually lead this process, but because their approach would purportedly take too long, Bill Burck, a private attorney for former President George W. Bush, has been running an expedited parallel process. It’s a move that Democrats have repeatedly pointed out as completely unprecedented.

“By what right, by what authority can Mr. Burck designate a document as ‘committee-confidential?’” said Sen. Dick Durbin. “He has the consent of the Republican committee.” The exceedingly partisan nature of this process has infuriated Democrats, who have said that it offers them no insight into how things are done and chips away at established methods for doing things.

“For all I know, some Republican staffer could have made this decision. It becomes a way for the majority to put all information through a strainer,” she said.

From the beginning, Democrats have objected to the timeline Republicans have used to usher Kavanaugh on to the Supreme Court before midterm elections — without fully releasing documents related to Kavanaugh’s time in the Bush White House.

The conflict has been simmering since Kavanaugh was nominated. He served as both White House counsel and staff secretary during the Bush administration. As staff secretary — a time that he’s characterized as a formative experience for his judicial practice — it’s possible that he engaged with millions of documents, a trove that Democrats have been interested in mining.

His extensive document trail is one of the major reasons Senate Majority Leader Mitch McConnell warned before his nomination that Kavanaugh could take longer to confirm. “The number of pages is said to run into the millions, which Mr. McConnell fears could hand Senate Democrats an opportunity to delay the confirmation vote until after the new session of the court begins in October, with the midterm elections looming the next month,” the New York Times’s Maggie Haberman and Jonathan Martin reported in early July.

But once Kavanaugh was nominated, Senate Republicans changed their tune. In the interest of expediting his confirmation process, they have decided to skip a great number of documents usually released as a matter of transparency, including the ones from his time as staff secretary.

“I think there’s a very real substantive fight happening here, and it’s very much a break from precedent and a break from norms and a break with the law. The law clearly states that the White House’s records are a matter of public record and belong to the people,” says Jake Faleschini of the Center for American Progress. “The people have a right to know what happened in the Bush White House, when Kavanaugh was one of the most important people who was there.”

Senate Democrats submitted a Freedom of Information Act request to gain access to them last month, but such requests are often slow.

Republicans argued that the documents Democrats wanted from the archives — especially the ones relating to Kavanaugh’s time as White House staff secretary — were not relevant for his consideration for the Supreme Court. Additionally, they’ve noted that they have obtained a record number of documents related to Kavanaugh’s record, compared to those obtained during prior nomination processes.

Then, Republicans released 42,000 pages of emails the night before Kavanaugh’s hearings began. “For the record, that is a rate of 7,000 pages per hour,” Sen. Sheldon Whitehouse (D-RI) pointed out at the beginning of the hearing, calling such a feat “superhuman.”

How this came to a head with Booker

Booker, who is widely rumored to be eyeing a presidential run in 2020, certainly made a show of his point on Thursday, but Democrats genuinely feel that Republicans have diverted from the norms usually afforded to the process of confirming a Supreme Court justice. The squabble on Thursday is a continuation of an ongoing conflict over proper process and the way Kavanaugh’s confirmation has been conducted — with Democrats arguing that Republican efforts have shifted existing norms.

“Republicans aren’t making a case for what a qualified Supreme Court justice should look like. They are instead defending their decision to block Democrats from getting access to the documents they want,” James Wallner, a political scientist for the conservative think tank R Street, told Vox’s Tara Golshan.

Booker’s Democratic colleagues backed his efforts and argued that the entire review of Kavanaugh’s documents has been partisan and mishandled — using terms like “sham” and “rigged.”

Senate Minority Leader Chuck Schumer threw his backing behind these protests and the ability of Democratic Senators to publish these “committee-confidential” emails.

I stand w/ Judiciary Committee Democrats who are well within their rights to release these very important documents that a former Kavanaugh deputy designed as “committee confidential.”

The American ppl deserve to know the truth about Judge Kavanaugh’s record. #WhatAreTheyHiding?

Unfortunately, it’s not clear that any of this will make a difference. Republicans have a 51-vote majority, which is all they need to confirm Kavanaugh if they stay united.

Michigan Democratic Sen. Gary Peters staves off a strong challenger to keep his Senate seat
Zero Hours is a terrific fiction podcast about the end of the world
South Carolina voters unconcerned by Trump talk on tariffs, impact on state
Texas isn’t a swing state — but it matters
California just passed a landmark law to regulate Uber and Lyft
Bloomberg says his company will release 3 women from nondisclosure agreements