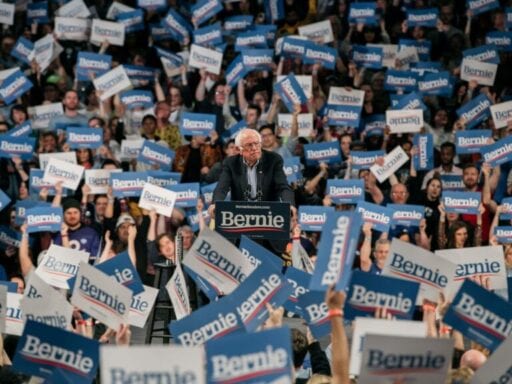 Share
Loading...
Sen. Bernie Sanders in a sea of supporters at a November 3, 2019, rally in Minneapolis, Minnesota. | Scott Heins/Getty Images

Sanders let the chants die out at a rally in Minnesota. But debate remains over whether they are an appropriate form of protest.

President Donald Trump was against the subject of “lock him up” chants Sunday. But rather than being made to his face, as in his appearance at a 2019 World Series game, they were made at a rally for senator and presidential candidate Bernie Sanders in Minneapolis, Minnesota.

The chants broke out during speeches both by Sanders and campaign supporter Rep. Ilhan Omar (whose district includes the city), including when Sanders said of Trump, “We have a president of the United States who is a pathological liar, who is running the most corrupt administration in history.”

Here’s a clip of the chants from Sanders’s speech:

Chants of “Lock Him Up” at tonight’s @BernieSanders rally in Minneapolis. pic.twitter.com/58NT6dQ7ZP

It was not the first time the chants had been heard at a Sanders rally. In his comeback rally in late October, the crowd took up the call during remarks by Sanders campaign co-chair and San Juan Mayor Carmen Yulín Cruz.

They erupted when Cruz told the crowd they were there to talk about Sanders’s vision rather than “a racist, demagogue, xenophobic, racist, paper-throwing president.”

Neither Sanders nor Omar responded to the chants; Sanders sometimes paused to let them die out, then continued with his speech. Trump, too, often does not respond to the chant that inspired this one, “lock her up,” which references his former presidential rival Hillary Clinton, though he does sometimes pause to bask in them — including in his Friday rally in Tupelo, Mississippi.

TRUMP mentions Hillary Clinton’s emails and his fans respond by chanting, “Lock her up!” Trump basks in the chants for extrajudicial punishment. pic.twitter.com/WaXVIfmIrh

The silence on the president’s part is often interpreted as tacit approval. While he has never joined in on the chants, he has said “lock her up is right” as the chants die down.

Sanders and Omar made no such comments. And unlike some of Trump’s surrogates — including Lt. Gen. Michael Flynn and former New Jersey Gov. Chris Christie — Omar did not egg the crowd on during the chanting.

Whether they condemn it — or even come to embrace it — remains to be seen, in part because there is still debate as to whether the calls to “lock him up” are justified or inappropriate.

Briefly, the controversy over chanting “lock him up”

Trump has faced increased calls for his imprisonment in recent weeks as the impeachment inquiry into whether he pressured Ukraine into investigating a political rival intensifies.

The calls came at the Sanders rallies, at a protest in New York City during his appearance at a UFC event there Saturday, and — most notably — at Game 5 of the 2019 World Series:

The chants at the World Series brought a storm of controversy as politicians, media personalities, and journalists argued about whether they were an appropriate response to a president who has allowed a similar chant to flower against his political rivals or if it was a frightening call for mob justice against the leader of the United States, as Vox’s Andrew Prokop has explained:

MSNBC hosts Joe Scarborough and Mika Brzezinski argued Monday morning that the chants were “sickening” when Trump supporters did them — and that they were also “sickening” when aimed at Trump himself.

For that, the pair faced a torrent of Twitter criticism, mostly based around the retort that, actually, the two situations are quite different — either because of the differences between Trump and Clinton’s scandals, or the differing contexts (a baseball crowd vs. a political rally).

But within that backlash, there was an interesting split among some who argued that the sports fans shouldn’t be taken literally or seriously — and others who argued that, no, Trump really has committed serious crimes and he really should be in prison. The divide is a sign of differing viewpoints both on political rhetoric and on criminal prosecutions more generally.

That debate was never really settled.

Figures like Democratic Sen. Chris Coons argued against using such language because “it reminds me of things that happen in countries where rule of law is unknown or unestablished. And sort of whipping up public furor on both sides, I don’t think is constructive or helpful.”

Opposing this view were those like political commentator Asha Rangappa, who wrote, “Americans who chant ‘lock him up’ to a President who acts like a tyrant and believes he is above the law is calling for accountability.”

Others argued that the difference between the “lock her up” and “lock him up” chants weren’t that the president has acted in ways that could lead to his impeachment, but that he has been accused of crimes — sexual assault among them — that, when found by courts to have occurred, typically lead to long sentences.

Clinton, on the other hand, has been investigated by both the FBI and the State Department for mishandling emails; she was cleared of wrongdoing by both organizations. And even if she had been found to have jeopardized national security, it isn’t clear she would have had to go to prison over it (although it could be argued that other facing similar charges, like Reality Winner, were ultimately imprisoned).

The chants at the Sanders rally suggest Democrats — particularly whoever becomes the party’s presidential nominee — will be forced to take a stance on this debate, as the chant does not seem to be going anywhere for now.

Whether rank-and-file Democrats’ “lock him up” chants are rerouted, as with Cruz; allowed to dissipate, like Sanders chose to do; or encouraged will likely depend on who that nominee is. As they work to decide on strategy, however, Democratic leaders will be forced to consider a question posed by Prokop.

“Trump made the case that Clinton was corrupt by simply stating that she should be in prison,” he wrote. “Now that Democrats are faced with the challenge of convincing voters Trump is corrupt, some wonder, should they really hold back, when they feel his behavior is far more egregious?”

How the polls look on the last weekend of the election
Amy Klobuchar is tempting some Biden supporters in New Hampshire to change their minds
Deepfakes are a real political threat. For now, though, they’re mainly used to degrade women.
Income inequality is changing how we think, live, and die
Civil rights icon Rev. Joseph Lowery has died
Clothing sizes — especially for women — are complicated. Here’s why.