A SARS-like virus is spreading quickly. Here’s what you need to know. 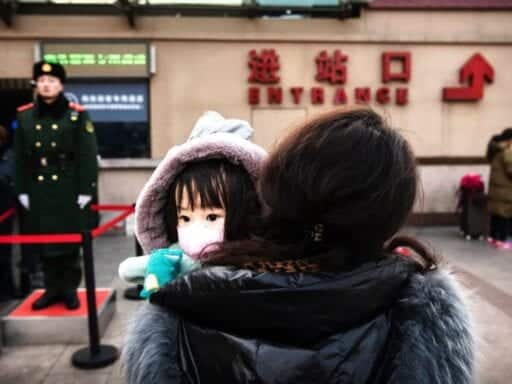 A Chinese girl wears a protective mask as she is held by a relative in Beijing, China on January 21, 2020. | Kevin Frayer/Getty Images

Hundreds of people have been sickened by a new coronavirus in at least five countries, including the US.

Just three weeks ago, China announced the outbreak of a mysterious new virus in the city of Wuhan involving a few people who’d been exposed to animals at a local food market.

Flash-forward to Tuesday: the number of cases has leaped to nearly 300 and there are sick people in at least five other countries, including the first case of 2019-nCoV, as the virus is known, in the United States.

The patient, who is in Washington state and was hospitalized with pneumonia last week, had recently had traveled to Wuhan, China — the epicenter of the outbreak, according to the New York Times.

With information about 2019-nCoV — and its risk of spreading — evolving rapidly by the day, we’ve answered basic questions about the outbreak here. We’ll be updating as more information becomes available.

1) How did this outbreak start?

The outbreak was first acknowledged by Chinese officials on December 31 in Wuhan, a city of 11 million in Hubei province. At that point, cases centered on Wuhan’s Huanan South China Seafood Market. Local health officials reported then that patients with the virus were “mainly business staff and purchasers” at the market, where vendors peddle seafood as well as animals such as birds and rabbits. Researchers in China quickly ruled out known pathogens as the likely cause. And the leading hypothesis then was that a yet-to-be-identified novel virus had spread to humans from one of the animals in the market.

By January 9, the state broadcaster, China Central Television, reported that many of the people who had become ill tested positive for a new virus, 2019-nCoV. Two days later, scientists in China shared the genetic sequence of the new virus, and the WHO applauded China’s efforts. (This transparency was a contrast to the SARS outbreak of 2003, when China was heavily criticized for withholding information about the outbreak for too long. The virus eventually killed 774 people and infected more than 8,000.)

While Chinese authorities still believe the 2019-nCoV outbreak may have started at the market — with animals spreading the virus directly to humans — by January 20, they confirmed that human-to-human transmission is also happening. On January 21, the WHO’s Western Pacific Regional Office said on Twitter that the spread may involve “sustained” human-to-human transmission, meaning the virus can transmit easily from one person to the next instead of just from a single sick person to a few other close contacts. Knowing that, “the scope of this outbreak expands massively,” said Peter Daszak, the president of EcoHealth Alliance, a US global health research organization working in China.

2) How many people are sick? How many have died?

As of January 21, 298 people had fallen ill across China — in Wuhan, Shanghai, Guangdong, and Beijing. Additional cases have turned up in travelers to the US, Thailand, Japan, Taiwan, and South Korea. The Philippines and Australia are monitoring suspected cases. A total of six people have died.

But the real toll may be much higher.

Researchers who have modeled the outbreak’s potential in Hong Kong and the UK suggest there are likely many more undetected cases — from 1,300 to more than 1,700. The risk of rapid spread is heightened at the moment, as hundreds of millions start to travel this week for China’s Lunar New Year on January 25.

3) How easily does this virus spread?

We don’t yet know the exact way the virus is spreading or how easy it is to catch 2019-nCoV. But we do know it’s part of a large family of viruses called coronaviruses, which mostly infect mammals, including bats. Coronaviruses attack the respiratory system, sometimes targeting the cells deep within the lungs. Only seven, including 2019-nCoV, SARS, and MERS, are known to be spread to humans.

According to the Centers for Disease Control and Prevention, human coronaviruses are most commonly passed via:

We also know at least 15 health care workers have been infected. “It’s unusual to get health care worker infections in outbreaks,” explained Tom Inglesby, director of the Center for Health Security of the Johns Hopkins Bloomberg School of Public Health. “It’s always a sign of alarm when that happens,” he added, because it means the virus may be easily transmitted.

4) What are the symptoms?

Two of the seven coronaviruses that infect humans, SARS and MERS, can cause severe pneumonia and even death. The rest lead to milder symptoms, like a common cold. Right now it’s not clear where 2019-nCoV falls on that spectrum.

So far, the main symptoms reported are fever followed by difficulty breathing, the WHO said. Chest X-rays have shown signs of pneumonia in both lungs. (A quick refresher: Pneumonia is an infection in the lungs that can be caused by a variety of organisms — bacteria, fungi, viruses, even parasites. The lungs’ air sacs become inflamed and fill up with fluid or pus instead of air.)

Of the 298 infected, nearly 230 are being treated in the hospital. Among them, around 60 cases are critically ill. Others who are sick have recovered or been sent home from the hospital. And six people have died.

It’s possible there are many more people with the virus out there who have very mild symptoms or who are asymptomatic, said Dr. Jeremy Farrar, director of the Wellcome Trust, a research charity focused on global health. If that’s the case, and there are thousands carrying 2019-nCoV while only a few people have died, this outbreak will look milder.

It’s also possible this virus winds up behaving like SARS, said Inglesby, which kills about one in 10 patients infected. With SARS, “We saw substantial spread in health care settings where health care workers became ill during care for patients,” for example. “This is a very serious outbreak with the potential for widespread transmission.”

5) What’s the likelihood this becomes a global public health emergency?

The potential for this virus to spread further is so great that the World Health Organization is gathering an expert panel to meet on Wednesday to decide whether the emergence of 2019-nCoV constitutes a global public health emergency.

Formally, a public health emergency of national concern, or PHEIC — pronounced “fake” — is defined as “an extraordinary event which is determined to constitute a public health risk to other States through the international spread of disease and to potentially require a coordinated international response.” In reality, it’s a political tool the WHO uses to sound the alarm about a serious disease that has caught the world off guard and put people’s health in danger. It’s meant to draw countries’ immediate attention, to galvanize resources, and stop the disease from spreading further across borders.

A key consideration in declaring a PHEIC is whether the disease threat is dire enough to risk countries enacting travel and trade restrictions. Declarations can be devastating to local economies and are often associated with economic losses. So they’re not taken lightly. In fact, the WHO has only declared a public health emergency five times since the International Health Regulations, which govern global health emergency responses, were enacted in 2007.

The first time was in 2009, with the outbreak of the H1N1 swine flu pandemic. The second time was in May 2014, when polio seemed to surge again, threatening the eradication effort. The third time, in August 2014, came as the Ebola outbreak in West Africa was growing out of control. The fourth was related to Zika in 2016. And the fifth was another outbreak of Ebola that’s ongoing in the Democratic Republic of the Congo.

The emergency committee meeting Wednesday will have to agree that an outbreak meets that formal definition: that it is extraordinary, poses a high risk to other countries, and requires an immediate, coordinated global response. Inglesby, for one, thinks it already meets that definition. “The criteria for a PHEIC seem to have been fulfilled: [The virus is] spread internationally, with the potential to spread further. It’s new. It’s causing serious illness.”

6) How worried should I be about a pandemic?

There are too many unknowns to say. We don’t know which animal carries this virus, how exactly it spreads, how easily it spreads among people, how deadly it is, or the range of symptoms it can cause. We don’t know how vulnerable the people who have died were to pneumonia. But many so far appear to be elderly with underlying health conditions, which would suggest this virus may not be a mass killer.

The CDC has stated that “the risk from 2019-nCoV to the American public is deemed to be low.” But the agency — along with the Homeland Security Department’s Customs and Border Protection — also began screening passengers for the virus at three airports on January 17. Travelers from Wuhan arriving at the San Francisco (SFO), New York (JFK), and Los Angeles (LAX) airports may have their temperatures taken and be asked to fill out a symptom questionnaire.

That doesn’t mean American officials expect the US to be inundated with more cases. It’s the major cities in and around China that are most at risk, according to a paper posted on January 14 in the Journal of Travel Medicine. The top travel destinations out of Wuhan — and most at risk of cases — include Bangkok, Hong Kong, Tokyo, and Taipei.

But there are likely to be several US cases, said Nancy Messonnier, director of the CDC’s National Center for Immunization and Respiratory Diseases, in a press briefing Friday. “I expect that we’re going to see more cases, and I think it’s highly plausible that there will be at least a case in the United States.” By Tuesday, that prediction proved correct.