A second Republican senator is calling for Trump’s resignation 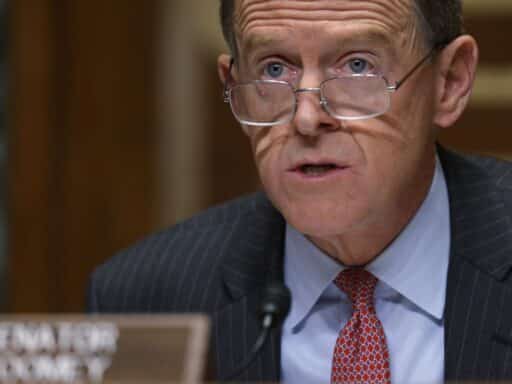 Sen. Pat Toomey (R-PA) called for President Donald Trump’s resignation during an appearance Sunday on NBC’s Meet The Press. “I think the best way for our country, Chuck, is for the president to resign and go away as soon as possible,” Toomey told the show’s host, Chuck Todd.

WATCH: Sen. Pat Toomey (R-Pa.) tells Meet the Press, “the best thing would be a resignation” from President Trump. #MTP@SenToomey: “The best way for our country is for the president to resign and go away as soon as possible” pic.twitter.com/uBjXHaRC3s

On Friday, Alaska Sen. Lisa Murkowski became the first GOP senator to call for Trump’s removal from office, saying that she’d reconsider her membership in the Republican Party, “if the Republican Party has become nothing more than the party of Trump.” She later followed that statement by clarifying that she does not plan to join the incoming Democratic majority.

On Saturday, Toomey told Fox News that he believed that Trump had committed “impeachable offenses.” In that interview, Toomey said he believed that Trump’s behavior this week, which triggered a deadly insurrection at the US Capitol on Wednesday, “does disqualify him from serving,” but he noted Trump has less than two weeks remaining in office.

“I don’t know whether logistically it’s actually really even possible or practical and I’m not sure it’s desirable to attempt to force him out, what a day or two or three prior to the day on which he’s going to be finished anyway,” Toomey said. “So I’m not clear that’s the best path forward.”

Toomey made appearances Sunday on multiple political talk shows, reiterating his call for Trump’s departure on each. On CNN’s State of the Union with Jake Tapper, the Pennsylvania senator attempted to explain why the erosion of his previous support for the president.

Toomey, who moments ago called for Trump’s resignation, defends his decision to vote for him in November pic.twitter.com/tdeHGVelG9

“The president’s behavior after the election was wildly different than his behavior before, he descended into a level of madness and engaged in a level of activity that was just absolutely unthinkable,” Toomey told Tapper.

As Vox’s Fabiola Cineas has explained, however, Trump’s has a long history behavior similar to that he exhibited after the 2020 election.

It remains to be seen how many GOP lawmakers will ultimately call for Trump’s resignation — meanwhile, however, Democratic members of the House are preparing articles of impeachment against Trump following the Capitol insurrection Wednesday.

So far, over 220 Democratic representatives have publicly shown support for impeachment, though it’s unlikely that the Senate would be able to conduct a trial before Trump leaves office.

How baby clothes became a pink and blue battleground
Vox Sentences: Too many tariffs to keep track of
How Russian hackers infiltrated the federal government
Meet Noel Francisco, the man who could oversee the Mueller probe after Rosenstein
How Trump got suckered by Iran and North Korea
Pose’s Billy Porter makes LGBTQ history with his Emmy win