“A semi-truce”: Trump makes an EU deal to avoid a trade war 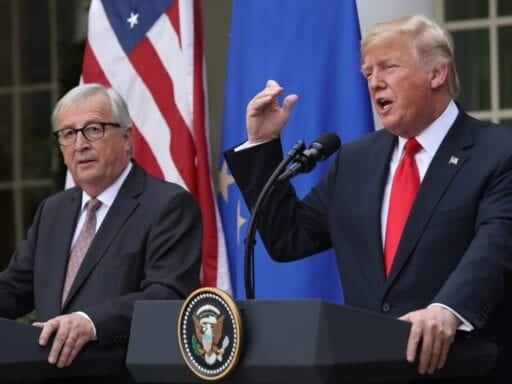 But one big question remains: Can the US and the EU actually agree to some sort of bigger trade deal after this first step?

President Donald Trump and European Commission President Jean-Claude Juncker have just pulled the US and the European Union back from the brink of a full-blown trade war.

Following a meeting at the White House on Wednesday, Trump and Juncker, who heads the EU, held an unexpected press conference in the Rose Garden to announce the broad outlines of an agreement designed to avert what many saw as a looming trade war.

Here’s what they agreed to:

Both leaders seemed pleased with the deal. Trump dubbed it a “new phase” of relations between the two trading partners. “We had a big day. Very big,” he said.

Trump added that the deal would “open markets for farmers and workers, increase investment, and lead to greater prosperity in both the United States and the European Union” and that “it will also make trade fairer and more reciprocal.”

We agreed today to work together toward zero tariffs, zero non-tariff barriers, and zero subsidies on non-auto industrial goods.
This will open markets for farmers and workers, increase investment, and lead to greater prosperity.
Joint statement: https://t.co/A7ZPLS9vd4 pic.twitter.com/7tCeKptqrX

Trade negotiations between the two leaders could’ve gone a lot worse, as some European leaders had been calling for Juncker to take a hard line against Trump.

“We refuse to negotiate with a gun to the head,” French Finance Minister Bruno Le Maire told France24 on Saturday, just four days before Juncker’s visit. “It must be the US that takes the first step to de-escalate.”

But Marie Kasperek, a US-EU trade expert at the Atlantic Council think tank, told me that this agreement allowed both sides to walk away with improved economic ties while avoiding the worst — and it could possibly help repair the relationship down the line. “This is a semi-truce with plans to build an actual truce,” she said.

But one big question remains: Can the US and EU actually agree to some sort of bigger trade deal after this first step?

Kasperek said that’s unlikely, as the EU probably won’t seriously engage in trade negotiations until Trump removes the steel and aluminum tariffs, which he has shown little desire to do so far. Some European politicians hoped Juncker would extract a hard commitment from Trump on that issue.

If #Juncker did not get hard agreement from #Trump on removing the unjust steel & aluminum #tariffs then he did not achieve his goal. EU has put de-escalation and mutual benefit of good trade relation first, always, but today’s concession could set dangerous precedent #trade

It’s also unclear how long Trump would want to engage in trade negotiations, which usually take a long time and hinge on increasingly specific and esoteric details, or if he will change his mind and lash out at the Europeans down the road.

But for now, both sides can part with a win for each: The US gets immediate benefits from increased soybean and energy exports, and the EU leaves with no new tariffs on the table. Not bad for an impromptu press conference.

Why protesters are throwing milkshakes at Nigel Farage
American Samoa also voted on Super Tuesday. Mike Bloomberg won.
Armenia and Azerbaijan’s fight over Nagorno-Karabakh, explained in 500 words
How the Venus de Milo got so famous
Beto O’Rourke is blowing Ted Cruz out of the water in fundraising
US could see 100,000 coronavirus deaths, Italy extends lockdown: Wednesday’s coronavirus news