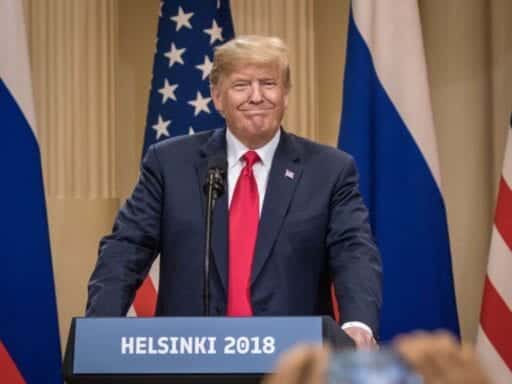 Trump is an anti-vaxxer. He treats foreign policy with the same ignorance and misplaced confidence he brings to vaccine science.

We don’t talk about it very much, but President Donald Trump is a hardcore vaccine truther. He has sent more than 20 tweets over the past several years propagating the myth that vaccines cause autism and suggesting doctors should cut down on the number of vaccinations they give to young children.

This may seem totally disconnected from Trump’s shameful press conference with Russian President Vladimir Putin on Monday, but it isn’t. In fact, it’s vital to understanding Trump’s dangerous foreign policy. In both cases, the same specific kind of ignorance — a complete disinterest in understanding why things are the way they are — is leading Trump to advocate potentially deadly positions.

Think about what it means to be a vaccine skeptic. There’s no real evidence that vaccines “cause” autism, and there’s an overwhelming scientific consensus that they are vital to preventing the spread of serious diseases. Trump’s argument that vaccines are dangerous is founded in basic ignorance about how effective they’ve been in eradicating diseases, and a misplaced confidence in his own mastery of vaccine science.

Political scientist Matt Glassman sees Trump’s skepticism about NATO in a similar light. There is a huge amount of evidence that the Western alliance has played an important role in deterring conflict on the European continent, much in the same way that vaccines have helped eradicate diseases: War in Western Europe today seems about as unthinkable as a polio outbreak in Manhattan.

But Trump has never demonstrated any understanding of how NATO actually works, or the reasons it’s been a historically effective defense pact. Instead, he’s attacked NATO on the grounds that NATO allies owe the United States money in exchange for its pledge to defend them — which is flatly untrue. As with vaccines, Trump is ignoring long-term benefits based on a misguided understanding of how the thing in question works:

NATO is the vaccine of American foreign policy. It has real definable costs, but its amazing success over multiple generations has left people largely forgetting what it prevented and how effective it has been, and thus given rise to challenges to it on largely ignorant grounds.

A similar dynamic applies to Trump’s cozying up to Putin.

There are very good reasons why the United States and Russia have been at odds of late — Russia’s aggressive foreign policy in places like Ukraine and Syria, its use of a chemical weapon to assassinate a former spy on British soil, and its interference in the US election, just to name a few.

At root, the US-Russia conflict stems from Putin’s desire to expand Russian influence at America’s expense — tearing at the edges of the American-led global order to make Russia into the same kind of global power it was in the days of the USSR.

But Trump doesn’t appreciate, or care about, the deep logic that has governed America’s Russia policy in the past. When asked about US-Russia tensions during his press conference with Putin on Monday, Trump said that both sides were to blame and that it was time to move on:

On Russia, as on NATO and trade and a host of other issues, he’s shown himself to be completely ignorant of the fundamental structure of international politics, of the logic that has governed America’s approach to world politics since 1945. What’s more, he’s made no demonstrable progress in learning during his year and a half in office. He’s confident in his own knowledge; multiple reports out of the White House suggest he doesn’t read much and largely ignores daily briefings.

“Trump won’t read anything — not one-page memos, not the brief policy papers, nothing,” former Trump economic adviser Gary Cohn wrote in an email unearthed by journalist Michael Wolff. “He gets up halfway through meetings with world leaders because he is bored.”

So Trump goes onstage with Putin and sides with the Russian dictator’s denials of election interference over the assessment of America’s own intelligence services, with blithe disregard for how this could affect America’s alliances or position in the world. He seems sure that he’s doing the right thing, even though most US foreign policy experts — including, apparently, many of his own advisers — disagree.

Even a former member of Trump’s National Security Council labeled the press conference “an effing disgrace” in a text to Axios, adding that “the President has lost his mind.”

Trump has an anti-vaxxer view of the world: skepticism about the most well-justified elements of American foreign policy grounded in a misplaced faith in his own mastery of world politics. But while he can’t make doctors stop administering vaccines, he does have the power to change US foreign policy.

And Monday’s press conference shows that he’s doing it — consequences be damned.

6 winners and 5 losers from Succession season 2, episode 3, “Hunting”
Poll: Bernie Sanders does well with Latinos — but not in Florida
Lindsey Graham’s latest Fox News appearance highlighted the GOP’s identity crisis
9 podcasts that can help soothe your coronavirus anxiety
Lady Gaga and Bradley Cooper shine in the newest version of A Star Is Born
The pandemic may leave communities of color undercounted in the census. It could cost them billions.