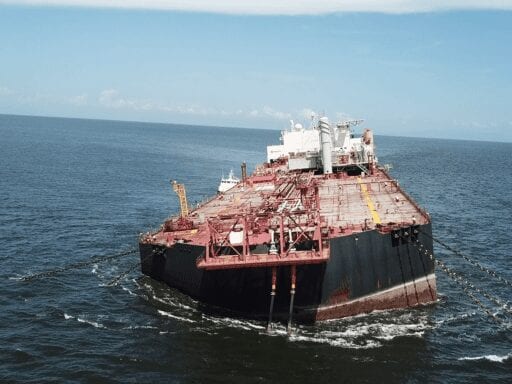 The FSO Nabarima’s precarious situation has worried activists and governments for months.

A stranded oil tanker many feared was on the verge of spilling 1.3 million barrels of crude oil into the Caribbean no longer poses a major environmental risk, Trinidad and Tobago’s government said Wednesday.

But despite the positive assessment, environmental activists and local experts still want the dual-island nation’s government to take proactive measures in case the worst actually happens.

The precarious situation of the Venezuela-flagged oil tanker, the FSO Nabarima, has concerned environmental activists and governments around the world for months. The ship has been stranded in the Gulf of Paria between Venezuela and the island of Trinidad since January 2019, when President Donald Trump sanctioned Venezuela’s state-owned oil company, Petróleos de Venezuela (PDVSA).

While the measure cut off revenue Venezuelan President Nicolás Maduro uses to wield influence and stay in power, it also led PDVSA to abandon operations aboard the ship.

That essentially left the tanker to rot, fueling fears the oil on board might eventually spill into the waters below. And if it did, the entire marine environment of the Caribbean and the Trinidad and Tobago fishing industry could be in danger.

How the stranded vessel became a matter of international concern

Concern for the status of the Nabarima began accelerating in mid-August.

During a conversation with a PDVSA union representative, local environmental nonprofit group Fishermen and Friends of the Sea (FFOS) was alerted that the FSO Nabarima was dangerously tilting and needed to be inspected, FFOS program director Lisa Premchand told me. At the time, PDVSA workers were protesting poor working conditions.

FFOS immediately brought the issue to the attention of Trinidad and Tobago’s government, including the prime minister. After receiving no response, the group started a social media campaign and gave interviews to local news outlets.

Word of the distressed tanker spread.

In September, the New York Times reported that the Nabarima was at risk of sinking due to poor maintenance. Ten days later, Trinidad and Tobago’s government announced it was awaiting permission from Venezuela to have a delegation board the ship and assess the danger of an oil spill.

Then, on October 16, FFOS corporate secretary Gary Aboud went to see the Nabarima for himself. After noticing the ship was titled at a 25-degree angle, Aboud called for swift action in a YouTube video that quickly gained global attention, including that of prominent environmental activist Greta Thunberg.

It’s unclear what direct impact the notoriety had on the governments of Trinidad and Tobago or Venezuela. But four days after Aboud posted his video, Trinidadian Foreign Minister Amery Browne and Energy Minister Franklin Khan confirmed their government could finally board the Nabarima.

Somewhat surprisingly, what the three-person team found wasn’t that dire. The Nabarima “is upright and stable with no visible tilt and there is no imminent risk of tilting or sinking,” Khan told the Trinidad and Tobago Guardian on Wednesday, adding that the vessel “poses minimum risk of an oil spill at this time.”

So, problem solved, right? Not exactly.

On Tuesday, Argus Media reported that PDVSA had started pumping oil from the Nabarima into another one of its ships, the Icaro.

But Khan, Trinidad’s energy minister, also told the Trinidad and Tobago Guardian the Icaro could transfer only 25 percent of Nabarima’s 1.3 million barrels at a time. That means it’ll require several trips to rid the ship of all the oil on board, keeping the chances of an oil spill higher than zero until much of the load is gone.

That’s a problem, as Frank Teelucksingh, a physical oceanographer and director of Coastal Dynamics, a company that oversees environmental projects across Trinidad and Tobago, determined while conducting an oil-spill analysis in September.

“If the vessel does turn over or crack or spill its contents, we do not know exactly how much will be spilled,” Teelucksingh told me. “Some might lie on the surface and be transferred away by surface currents and winds, whereas some might get into the water column, if the vessel sinks. That would constitute a different distribution, and the oil moves differently as well.”

Teelucksingh suggested the government of Trinidad and Tobago get an accurate model up and running to gain a better sense of what an oil spill would actually look like. Having that would make the nation’s response more effective; for example, it would have a better idea of where to position cleanup crews. Further, booms — floating curtains made of plastic or other materials that serve as barriers to contain oil — could be used to encircle the vessel before it sinks, he said.

But because the Nabarima is a Venezuelan ship, Teelucksingh pointed out that placing a boom would be Venezuela’s responsibility, not Trinidad and Tobago’s.

Being prepared for a potential massive oil spill, no matter how little the risk, is vital. The toxicity from an oil spill can kill many species due to a lack of oxygen. That would devastate Trinidad and Tobago’s economy, which relies heavily on fishing, particularly in the exact waters the Nabarima is currently floating in.

That’s why local activists, including FFOS, are calling upon CARICOM, a coalition of Caribbean countries, to hold an emergency meeting to determine a joint response to the looming crisis. Since the entire Caribbean Sea could be severely harmed, impacting coastal communities and tourism, they say the problem is one the entire region needs to solve together — now.

The fate of the FSO Nabarima and its remaining oil have yet to be determined. It’s also unclear whether CARICOM will act, or if the situation will be left to Trinidad to handle. But one thing is for sure: The potential for danger remains while the ship holds oil in the Gulf of Paria.