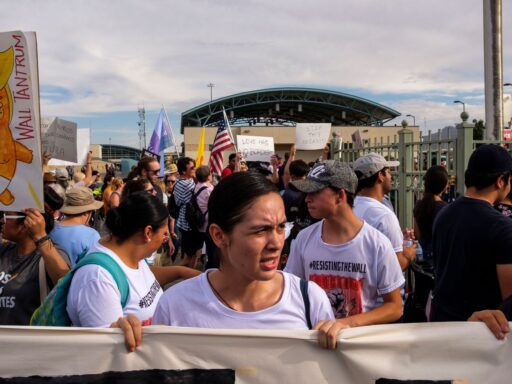 The state of Texas had challenged the policy, claiming that it violates an immigration enforcement agreement brokered in the Trump administration’s waning days.

US District Judge Drew Tipton, a Trump appointee, issued a temporary restraining order preventing the administration from stopping deportations for a period of 14 days. While the moratorium on deportations could still go into effect once he issues a final ruling, he said that the administration likely did not sufficiently explain the reasoning behind the policy change and may have violated federal immigration law requiring that a noncitizen be removed from the US within 90 days of being ordered deported by an immigration judge.

Texas Attorney General Ken Paxton — who is currently under investigation for bribery and abuse of office — is leading the legal challenge to the policy and has argued that it violates an agreement with the Department of Homeland Security that the state signed shortly before former President Donald Trump left office.

The agreement demands that DHS provide 180 days’ notice and consult with Texas before implementing certain changes to immigration policy. Legal experts say it is likely illegal and that an outgoing administration should not be able to enter into a contract with a political ally to obstruct the policy goals of the incoming administration.

But Judge Tipton said Tuesday that further investigation is necessary to determine whether the agreement is enforceable.

The moratorium on deportations, one of Biden’s key campaign promises on immigration, went into effect on January 22. DHS has said the policy allows it to “review and reset enforcement priorities” after the Trump administration sought to ensure that no undocumented immigrants — including families and longtime US residents — were safe from deportation.

According to a memo from Acting DHS Secretary David Pekoske, the moratorium applied to any noncitizen in the US who has been ordered deported by an immigration judge, unless they arrived after November 1, or if they voluntarily gave up their right to stay in the US with full knowledge of the consequences and the opportunity to obtain legal representation.

Noncitizens could still be deported if they have engaged in terrorism or espionage or are suspected of doing so, or if they otherwise pose a threat to national security. The head of US Immigration and Customs Enforcement could also intervene in an individual case to order their deportation. It didn’t not apply, however, to immigrants en route to the US.

Texas has argued that the moratorium will result in mass releases and that the state will consequently have to provide educational, social, welfare, health care, and other services to undocumented immigrants at great cost. The state has cited an internal email allegedly sent to ICE officers in Texas on January 21 and obtained by Fox News’s Tucker Carlson ordering the officers to “Release them all, immediately.”

However, Adam Kirschner, an attorney for the Biden administration, said during a hearing Monday hearing that ICE has so far deliberately refrained from releasing anyone subject to the moratorium until the judge rules in the case. The government has released people on separate grounds, he said.

It’s not the first time that Texas has been at the forefront of legal opposition to Democratic immigration policies. The state is also leading an ongoing lawsuit challenging the legality of the Deferred Action for Childhood Arrivals (DACA) program, threatening the legal status of more than 700,000 young undocumented immigrants who came to the US as children.

Ken Cuccinelli, formerly the second-highest-ranking official at DHS, secretly signed a memorandum of understanding with Texas during his final days at the agency, in an apparent attempt to impede the Biden administration from dismantling Trump’s immigration legacy. BuzzFeed News reported that he also penned similar agreements, known as Sanctuary for Americans First Enactment (SAFE) agreements, with state and local authorities in Indiana, Louisiana, Arizona, and Rockingham County in North Carolina.

The agreements are designed to delay the Biden administration from “taking any action or making any decision that could reduce immigration enforcement” or that could increase the number of unauthorized immigrants living in the US, according to court filings. They require that DHS not only provide advance notice of such changes, but that it also consider state and local authorities’ input and “provide a detailed written explanation” if it decides to reject that input.

Naureen Shah, senior advocacy and policy counsel for the American Civil Liberties Union, said in a statement that the agreements represent “a transparent attempt by Trump officials to tie the Biden-Harris administration’s hands and preserve Trump’s grotesque immigration enforcement policy.”

“The Biden administration has the authority, mandate, and responsibility to break from the Trump administration’s legacy, and nothing about these reported agreements changes that reality,” she said.

The agreements are indeed on shaky legal footing. Cuccinelli may not have had the authority to sign the agreements in the first place: The US Government Accountability Office found that he, along with former acting DHS Secretary Chad Wolf, were unlawfully appointed to their positions.

Courts have already invalidated Trump-era policies on that basis, including a memo issued by Wolf that blocked new applications to DACA while the agency was trying to end the program. Wolf later resigned over concerns about ongoing legal challenges to his appointment.

“The Department of Homeland Security lacked authority to cede control over federal immigration policy to Texas, and Texas has no power to demand specific performance of that contract in the form of a nationwide temporary restraining order,” DHS argued in a court filing. “Texas’s eleventh-hour effort to control and impede the new Administration’s immigration policies should be rejected.”

Theresa May offers a “new” Brexit plan, but nobody’s buying it
Facebook is under scrutiny from 4 federal agencies, including the SEC
It took 11 months to restore power to Puerto Rico after Hurricane Maria. A similar crisis could happ...
VMAs 2018: Madonna’s “tribute” to Aretha Franklin was all about Madonna
Welcome to The Highlight’s Gender Issue
The Asian giant hornet, a.k.a. the Murder Hornet, has arrived. Bees beware.