A top House Democrat just lost his primary — to a socialist 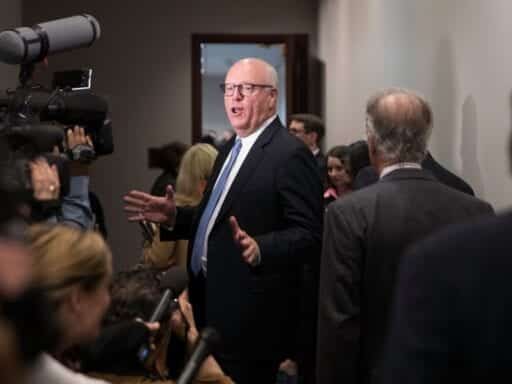 Alexandria Ocasio-Cortez ran boldly to the left of Rep. Joe Crowley — and won.

Rep. Joe Crowley, one of the top Democrats in the House of Representatives, lost his New York primary in a shocking upset on Tuesday night to community organizer Alexandria Ocasio-Cortez.

Crowley, having fundraised nearly $3 million for the race in New York’s 14th District, fell easily to a first-time candidate with a viral introduction video, a Democratic Socialists of America membership card, and a proudly leftist agenda. She ran on Medicare-for-all, a federal jobs guarantee, and getting tough on Wall Street. The race was called just before 10 pm for Ocasio-Cortez.

For those who closely watch elections, this is the biggest primary upset since then-Majority Leader Eric Cantor was defeated by David Brat in 2014. Brat ran on a campaign of depicting Cantor as a creature of Washington rather than a true representative of the district.

Likewise, Crowley, who has been in Congress since 1999, is the No. 4 Democrat in the House and was widely viewed as an eventual successor to Minority Leader Nancy Pelosi. Though he was a stalwart progressive on nearly every issue, he also had close ties to Wall Street. This made him a formidable fundraiser, something that Ocasio-Cortez turned against Crowley in the primary. She eventually fundraised about $600,000 through small-dollar donors.

The district, which spans parts of the Bronx and Queens, is heavily Democratic, so Ocasio-Cortez is all but guaranteed to be a new member of Congress in November.

Who is Alexandria Ocasio-Cortez?

At 28, Ocasio-Cortez couldn’t be a bigger contrast from the 56-year-old Crowley. She was born in the Bronx to working-class parents. Her mother is Puerto Rican. Her father is from the South Bronx. She’s a former staffer for the late Sen. Ted Kennedy.

She’s certainly portrayed herself as a woman of the people, playing up her working-class roots in a viral introduction video, which shows Ocasio-Cortez riding the subway and doing community organizing work. It was created by Means of Production, a media production company run by DSA activists Naomi Burton and Nick Hayes.

It’s time for a New York that works for all of us.

On June 26th, we can make it happen – but only if we have the #CourageToChange.

It’s time to get to work. Please retweet this video and sign up to knock doors + more at https://t.co/kacKFI9RtI to bring our movement to Congress. pic.twitter.com/aqKMjovEjZ

What was most exciting for progressives is the degree to which Ocasio-Cortez ran to Crowley’s left. As a member of the DSA, her website is a laundry list of every blue-sky progressive policy: Medicare-for-all, housing and jobs guarantees, gun control, ending private prisons, abolishing ICE, and investment in post-hurricane Puerto Rico.

She had some help from a major Crowley misstep — he sent a surrogate to a primary debate, which led to a scathing editorial from the New York Times. “This is the second primary debate in which Mr. Crowley was a no-show. A spokeswoman for Mr. Crowley said he had scheduling conflicts that wouldn’t allow him to attend the two debates, inevitably leaving voters to wonder — what are we, chopped liver?” the editorial read.

What does this mean for the Democratic Party?

Ocasio-Cortez’s victory is a story of the complacent establishment taking voters for granted. It’s the story of how the Democratic Party is getting pulled to the left. It’s also about how it’s not just progressive policies that are reshaping the party, but also people of color.

Ocasio-Cortez ran decidedly to the left of Crowley, but she also shook up how Democrats go about getting elected. Until now, Democrats have seen big money in politics as simply a deal with the devil that had to be made. Democrats are so often outspent by Republican mega-donors that they viewed courting big-dollar donors and corporations as part of creating a level playing field.

But if one of Democrats’ top fundraisers and likely successor to Nancy Pelosi can be toppled, perhaps Democrats need to rethink that deal.

America needs a bar and restaurant bailout
5 fascinating stories about Lee Israel, the real person behind Can You Ever Forgive Me?
Inception is the most imperfect of perfect movies. 10 years later, I still love it.
Catastrophe’s final scene is perfect
No matter what the Supreme Court decides, abortion opponents have already won
Here’s how to listen to Lover, Taylor Swift’s latest album