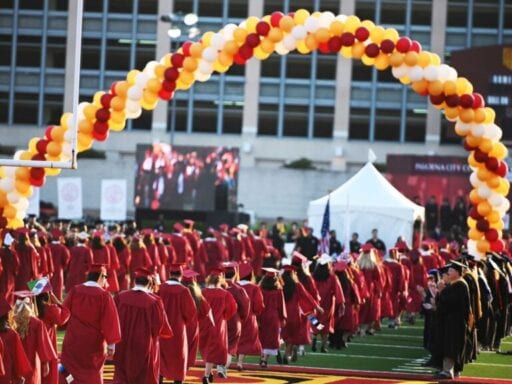 A senior official in charge of student loans for the Trump administration resigned Thursday, calling for sweeping student debt forgiveness and announcing his plan to seek a Senate seat in Georgia.

“We run through the process of putting this debt burden on somebody … but it rides on their credit files — it rides on their back — for decades,” said A. Wayne Johnson in an interview with the Wall Street Journal’s Josh Mitchell, who first reported Johnson’s resignation.

Johnson, who managed the federal government’s $1.5 trillion student loan portfolio as chief operating officer of Federal Student Aid, told the Journal that he wanted near-total forgiveness of student loans, citing data that suggests they will never be repaid and his firsthand experience with the “fundamentally broken” system.

Johnson called for forgiveness for student loan balances up to $50,000, which would erase debt for 37 million people, according to the Journal. Rather than making loans in the future, he said, the federal government should give students a $50,000 voucher to use for college or graduate school — a far more generous financial aid program than currently exists.

The movement to forgive student loan repayment is gaining traction. A Politico poll found that 56 percent of registered voters support a plan to eliminate student loan debt owed to lenders and the federal government. Advocates point to the burden it places on those trying to make payments and the boon to the economy that debt-free educated workers pose.

Sen. Bernie Sanders wants to cancel the entirety of the existing student debt for nearly 45 million graduates. Sen. Elizabeth Warren’s plan calls for canceling up to $50,000 of debt in households making less than $100,000, significantly reducing student debt for individuals making between $100,000 and $250,000, and making private student loans eligible for student loan forgiveness. Sanders’s and Warren’s plans are estimated to cost several trillion dollars to implement and both want to levy a tax on the wealthy to pay for the program.

The Education Department under DeVos has also made it more difficult for borrowers to qualify for loan forgiveness. This year, DeVos set more rigorous standards for cancellation for students who were defrauded by their colleges, reducing the types of university misconduct that qualify, and limiting the amount of time students have to file their claims to within three years after graduation.

Meanwhile, the Department of Education is only approving about 1 percent of applicants for student loan forgiveness through the Public Service Loan Forgiveness Program.

Johnson has apparently had enough. He said in a press release that he’s hoping to be appointed to replace retiring Georgia Sen. Johnny Isakson, and that, if appointed, he’d try to enact his student loan plan in Congress.

Mike Bloomberg is proof that you can’t buy a presidency
The media’s biggest bias is its centrism
The Senate Judiciary Committee is working on follow-up calls with Kavanaugh and the woman accusing h...
The election result the stock market is really afraid of
Latest House immigration bill: here's what you need to know about what will be voted on Wednesd...
The Kentucky Senate primary showcases the 2 theories of how to beat Mitch McConnell