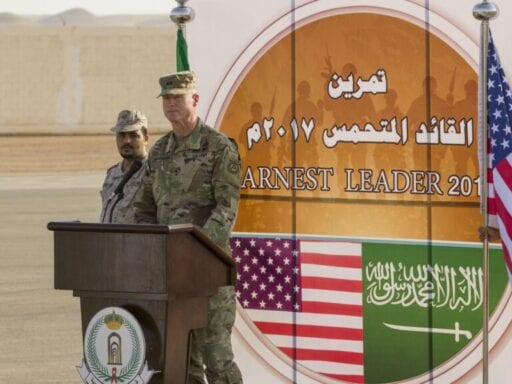 The military has a history of offensive material in their documents.

The US military uses manuals and other documents to help troops quickly understand their new surroundings when they’re deployed to foreign countries. The problem is that some of them, including one published just last summer, contain pretty offensive, outdated language.

Take this line from a June 2018 welcome booklet for military personnel joining a US mission to train Saudi troops in the Kingdom.

“The population of [Saudi Arabia] is mainly composed of descendants of indigenous tribes that have inhabited the peninsula since prehistoric times with some later mixture of Negro blood from slaves imported from Africa,” the manual reads, in a section titled “People and Population.”

It also contains these kinds of sweeping statements: “To speak of the Saudi Arab is to speak of his religion and culture for they are bound together inextricably.” Saudi Arabia is assuredly a majority Muslim country, but not everyone’s faith there permeates their daily life.

Comedian Hasan Minhaj mentioned the troubling document during a recent episode of his new Netflix show Patriot Act. Vox reached out to US Central Command, which oversees the training effort in Saudi Arabia, but it didn’t respond to repeated requests for comment.

In some instances, the welcome booklet contains useful information — like when explaining the split between Sunni and Shia Muslims in the Kingdom — but it clearly needs a rewrite.

It’s possible that the offensive language was included in the document’s earlier iterations and has unwittingly survived multiple updates since, in part because government officials typically don’t have (or don’t want to spend) the time to copy edit every single thing.

But that doesn’t excuse it. These are official US government documents. They’re issued to (and ideally read by) the more than 140 advisers in the mission.

And this isn’t an isolated incident — the military has used offensive language in its official texts for decades.

Offensive, racist language in US military documents is sadly a thing

Instructions for American Servicemen in Iraq during World War II is exactly what its title suggests: a booklet to help US Army troops stationed in Iraq during WWII navigate their new surroundings. It was a pocket manual that was issued to thousands of American servicemen in 1943.

And it contains some, uh, jarring passages. Here are just a few:

There are more instances, but you get the idea. The point is that there is a long history of the US using insensitive and racially charged language in military documents — and it seems that practice continues to this day.

Jennifer Williams contributed to this story.

Watch the final trailer for Star Wars: Episode IX — The Rise of Skywalker
Leaked emails show how Stephen Miller used Breitbart as his personal PR firm
Live results for 2020’s criminal justice ballot initiatives
Zeynep Tufekci recommends 3 books on how technology shapes us
Amy Coney Barrett is now one step away from becoming a Supreme Court justice
Why the trapped Thai soccer team is in increasing trouble: they’re running out of oxygen