A venue turned down an interracial wedding, citing “Christian belief.” It’s far from the first to do so. 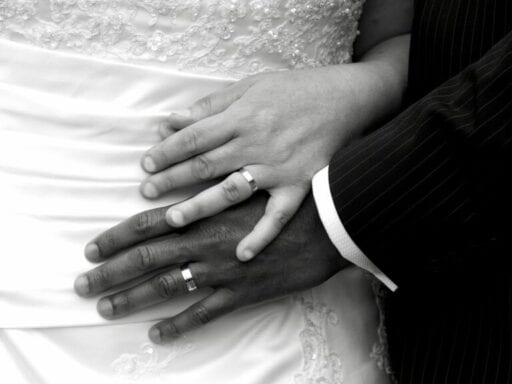 Share
Loading...
A Mississippi event venue has come under fierce criticism after video showed an employee saying that the venue’s “Christian belief” meant that it would not host interracial weddings. | Lisa Valder/Getty Images

The relationship between religious exemption laws and racial discrimination is not new.

An event venue in Mississippi has issued an apology after its owner was shown on video saying that her “Christian belief” led her to decline hosting a wedding ceremony for an interracial couple.

The video of the incident, which went viral over the weekend, shows an exchange between a woman later identified as the venue owner and a black woman named LaKambria Welch. In an interview with digital news outlet Deep South Voice, Welch says that she went to Boone’s Camp Event Hall In Booneville to clarify why it had recently said that “because of [the company’s] beliefs” it would not host a wedding ceremony for her brother, who is black, and his fiancée, who is white.

“The owner took a look at my brother’s fiancée’s page and wrote her back to say they won’t be able to get married there because of her beliefs,” Welch told Deep South Voice on Sunday. “He told my mom and she contacted the owner through messenger to only get a ‘seen’ with no reply. That’s when I took it upon myself to go get clarification on her beliefs.”

NEW: A Mississippi venue allegedly cancelled a couple’s wedding plans after discovering the couple was a black man + a white woman.

“We don’t do gay weddings or mixed race, because of our Christian race—I mean, our Christian belief,” a woman says.
More: https://t.co/9P0ZjNu3M0 pic.twitter.com/XKlRRSL44B

Where the video picks up, Welch is at the venue, asking the owner about the hall’s policies. “First of all, we don’t do gay weddings or mixed race … because of our Christian race, I mean, our Christian belief,” the woman says at one point.

“Just hearing it gave me chills,” Welch told the Washington Post this week.

Video of the exchange has fueled fierce criticism of the event hall and prompted some local officials to distance themselves from the incident. “The City of Booneville, Mayor, and Board of Aldermen do not discriminate on the basis of race, religion, gender, age, national origin, disability, marital status, sexual orientation, or military status,” officials said in a statement posted to Facebook on Monday. The statement added that officials “do not condone or approve these types of discriminatory policies.”

In an apology posted (and later deleted) on Facebook, the owner of the event hall said that “my intent was never of racism, but to stand firm on what I ‘assumed’ was right concerning marriage.” The woman also argued that her beliefs were the result of growing up in Mississippi and that it took a review of her Bible and a conversation with her pastor for the woman to realize that she was wrong.

As the venue owner attempts to minimize the fallout and backlash to her business, the incident has also called new attention to a 2016 Mississippi law that protects “sincerely held religious beliefs or moral convictions” about same-sex marriages, premarital sex, and gender identity. The law does not allow a person to discriminate based on race.

This is all part of a larger discussion about religious exemptions (also known as religious accommodations), which have recently been used to support those who argue that providing services to LGBTQ people or covering things like contraception for women violate the religious beliefs of business owners.

Critics of these sorts of accommodations argue that they are nothing but a shield for people who want to discriminate against others. To make that point further, civil rights advocates often argue that there is little distinguishing these sorts of accommodations from bans on interracial marriage and racial discrimination. Supporters of religious exemptions counter that there are clear civil rights laws that ban discrimination based on race, and that they would not break these laws.

But incidents like the one at the Mississippi venue suggest that there are people who aren’t aware of the distinction some groups have sought to construct.

Religious exemption arguments have been used to support racial discrimination

The argument that religion supports discrimination based on race dates back to slavery, when white landowners argued that they had been divinely appointed to own other human beings. The act of owning enslaved men and women was presented as a right, and whites supportive of slavery often pointed to the Bible when arguing that the very existence of black people meant that they were intended to be subjugated.

The argument would evolve after slavery’s end to justify Jim Crow laws, with white business owners and employers arguing that their religious belief in the separation of races should bar them from having to hire black workers or provide services to black shoppers.

“According to segregationist readings of the Bible, black people were inferior to white people, cursed by God and naturally suited to manual labor,” Tisa Wenger, an associate professor of American religious history at Yale Divinity School, wrote in a 2017 Washington Post op-ed. “Requiring white employers to hire black people would violate these sincerely held religious convictions and threatened once again to destroy the settled racial order of the nation.”

Not only could religious arguments for segregation be marshaled, they were marshaled. For example, Senator Robert Byrd of West Virginia cited the Bible in opposition to the Civil Rights Act of 1964. Reverend Jerry Falwell attributed the Brown v. Board of Education desegregation decision to Chief Justice Warren’s failure to know and follow God’s word; Falwell also preached against racial intermarriage. Falwell and Byrd were not alone.

Curtis notes that these sorts of arguments would prove to be persistent, perhaps most memorably in the context of laws banning interracial marriage. Numerous states banned the practice before 1950; by the time the Supreme Court was presented with the case Loving v. Virginia in 1967, more than a dozen states continued to ban interracial marriage. “Almighty God created the races white, black, yellow, malay and red, and he placed them on separate continents,” a trial judge who heard the Loving case said years before it went to the SCOTUS. “The fact that he separated the races shows that he did not intend for the races to mix.”

More than a decade after the Loving decision, in a case called Bob Jones University v. United States, the Court would rule again on a case involving racial discrimination, this one with an even more overt argument that religious beliefs supported segregation and discrimination.

The Supreme Court disagreed, siding with the IRS in 1983 and arguing that in this case protecting groups from discrimination outweighed the organization’s ability to be tax-exempt. The university did not actually end its ban on interracial dating until 2000. It regained its nonprofit status in 2017.

As the fight over religious exemptions has evolved to focus more on sexual orientation and gender identity, supporters of more recent religious exemption laws have argued that the measures they support are wholly different from previous efforts to use religious beliefs to uphold segregation and racial discrimination.

But some religious scholars and activists argue that because these laws have been used to pit a person’s right to equal access against religious beliefs, they are indistinguishable from the sorts of arguments raised during slavery and Jim Crow. And other experts fear that efforts to pass increasingly large religious exemptions could erode the established protections based on race, opening more people up to the sorts of claims made in Mississippi last week.

Welch says that she is outraged that she was confronted with these sorts of religious exemption arguments in 2019. And as the event hall’s owner attempts to defend herself, Welch says that the owner has no excuse. “I am 24 and have been brought up my entire life in a Christian Family; my grandad being a reverend,” Welch wrote in an email to the Post. “If I know that the Bible doesn’t say anything about biracial marriages, she knows too.”

New CDC data shows Covid-19 is affecting African Americans at exceptionally high rates
This year’s Best Documentary Feature Oscar nominees focus on a changing world
Why willpower is overrated
Your free TurboTax alternative now belongs to TurboTax
Millennials are getting screwed by the economy. Again.
Twitter is banning political ads. Nonprofits like mine could suffer.