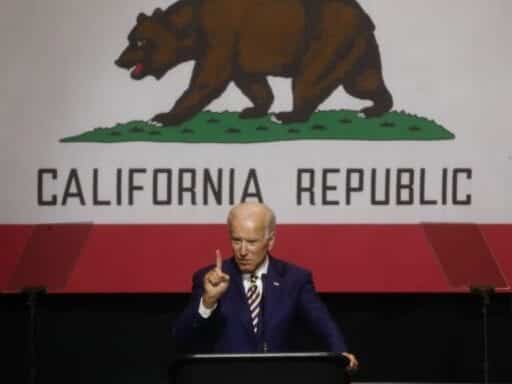 While most attention right now is (rightly) on the 2018 midterm elections, that can’t totally stop speculation about the 2020 presidential election — namely, who will take on President Donald Trump. According to a new and very early poll from CNN, Democrats are pretty into the idea of Joe Biden.

CNN polled Democrats and Democratic-leaning independents and asked them who among 16 possible presidential candidates they preferred. Even in that crowded field, a full third of respondents said they wanted former Vice President Biden. Sen. Bernie Sanders of Vermont came in a distant second with 13 percent. They were followed by Sen. Kamala Harris (D-CA) at 9 percent, Sen. Elizabeth Warren (D-MA) at 8 percent, and Sen. Cory Booker (D-NJ) and former Secretary of State John Kerry at 5 percent each.

Four percent of respondents said they preferred former New York City Mayor Michael Bloomberg, who this week changed his party affiliation back to Democratic, and Rep. Beto O’Rourke (D-TX), who is challenging Republican Sen. Ted Cruz for his Senate seat.

The poll also found that Americans are split on whether Trump will win reelection again in 2020 — but more of them think it’s likely than they did earlier this year. Forty-six percent of respondents said he will be reelected, while 47 percent said he wouldn’t. The same poll in March found that 54 percent of Americans thought Trump would lose his reelection bid and 40 percent thought he would win.

To be sure, the poll isn’t necessarily predictive. Similar CNN polls asking people whether they believed Barack Obama and Bill Clinton would be reelected two years before their contests were wrong: 54 percent of respondents to a March 2010 poll said they thought Obama would lose, and 65 percent of respondents to a January 1995 poll said Clinton would lose. Both men won reelection.

Democrats still aren’t sure how to feel about Bernie Sanders

As CNN notes, Sanders seems to spark some of the same divisions on the left he did in 2016 when he ran for the Democratic Party’s nomination for the presidency against Hillary Clinton — something that doesn’t bode well for his chances should he decide to run again in 2020.

Democratic voters appear to like traditional candidates, such as Biden, while left-leaning independents tend to favor Sanders. Among voters who identify as Democrats, 34 percent said they preferred Biden, and more said they preferred Harris to Sanders — 11 percent to 9 percent. Independents who lean Democratic, however, favor Sanders to Harris and Warren, with 31 percent saying they favor Biden, 21 percent Sanders, 8 percent Warren, and 7 percent Harris.

Younger voters tend to like Sanders more than older voters, in line with 2016, and men and women are fairly evenly split on their preferences for candidates.

The poll could be concerning for a possible Sanders 2020 campaign, as his name recognition is high coming off of the 2016 election, and 13 percent isn’t a very high number. CNN’s Harry Enten made the point on Twitter.

Sanders, at least, is doing better than another possible candidate with decent name recognition: Attorney Michael Avenatti. He has been quite open about his potential presidential ambitions, but he doesn’t seem to be getting much love from Democrats — 1 percent of respondents said they favored him.

Election Day 2020 is still 750 days away. That’s not stopping anyone from speculating.

If it feels early for there to be 2020 polling already, it’s because it is — but that hasn’t stopped speculation about what might be ahead. As Vox’s Ella Nilsen wrote in June, many potential contenders are already feeling pressure from progressives on issues such as the future of US Immigration and Customs Enforcement (ICE) and their Wall Street ties.

Both Biden and Sanders are keeping their visibility high, including over the weekend. But they’re keeping the message on 2018.

Biden appeared at a rally for Sen. Joe Donnelly in Indiana on Friday, who is up for reelection in November. “This election is bigger than politics. This is the most important election you’ve voted in,” Biden said. “Our basic American values are under assault.”

Sanders appeared on multiple political shows on Sunday, including ABC’s This Week, where host George Stephanopoulos asked him what his closing message is for the midterms.

“We have to end one party rule in Washington,” Sanders said. “Right now you have a president, you have leadership in the House and the Senate working overtime to the needs of the wealthiest people in this country, turning their backs on working families.”

It could also be his opening message in 2020.

I’ve covered gun violence for years. The solutions aren’t a big mystery.
A Facebook employee has broken the company’s code of silence. It’s amazing it stayed intact this lon...
“Are they alive?”: Uighur Muslims demand videos of relatives in Chinese internment camps
Justice Department charges Russian national with conspiring to interfere with 2018 midterms
Congress’s count of the electoral votes, explained
The US intel chief just said Russian interference is “continuing”