A warning sign for House Republicans in 2018: Democratic challengers are out-fundraising them 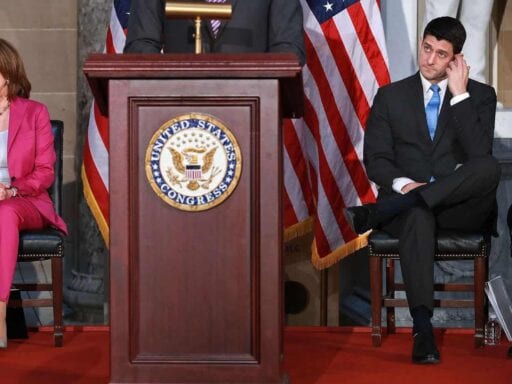 House Republican incumbent candidates in 56 districts raised less money than their Democratic challengers in the second quarter, Politico reported Wednesday, according to the most recent Federal Election Commission filings. It’s a warning sign for Republicans who are defending the House majority against a very enthusiastic Democratic base in the 2018 midterms.

Historically, Republicans in 2018 are faring worse than Democrats in 2010, the last wave election, when the GOP picked up more than 60 House seats. In the second quarter of 2010, 44 incumbent Democrats were outraised by Republican challengers, many of whom captured their seats in the fall, according to a POLITICO review of FEC records. Eight incumbent Democrats also trailed Republicans in cash on hand at this point in the 2010 election.

Of course, Hillary Clinton out-fundraised Donald Trump by a 2-to-1 ratio and still lost. And Republicans have a lot of built-in midterm advantages, from gerrymandering to the fact that older, whiter, and more conservative voters are likelier to vote in nonpresidential election years.

It’s not just the individual Democratic candidates pulling in cash. The Democratic Congressional Campaign Committee, the official campaign arm for House Democrats, reported Wednesday that it had raised more than $177 million total, hitting another record-breaking $15.2 million in the month of June. The DCCC noted that 57 percent donations in June had come from the grassroots.

The National Republican Congressional Committee has been neck-in-neck with the DCCC in fundraising over the past two years. A lot of credit has gone to House Speaker Paul Ryan, who has been heavily fundraising for the organization. And Republican PACs like the Congressional Leadership Fund are also boasting significant fundraising numbers.

The question is whether they will be able to cover a huge Democratic battlefield. Democrats have made their strategy very clear: They want to stretch Republican resources thin. And if Republican incumbents in red districts are falling short of their opponents, Republicans’ deep pockets might be strained.

“The huge size of the House battlefield, combined with incredible recruitment and candidate fundraising, is spreading vulnerable Republicans thin and forcing them to fight for every inch,” DCCC Chair Ben Ray Luján said early this year. “We’ll need every penny in the face of an unprecedented flood of outside Republican money, and there’s certainly more work to do.”

Scott Pruitt gave “super polluting” trucks a gift on his last day at the EPA. A court just put it on...
A “new” Amazon waffle maker came with an old crusty-looking waffle already in it
How Old Navy quickly turned its stores into e-commerce distribution centers
Trump supporters’ last-ditch downtown DC election protests got off to a bleak start
I was skeptical of unions. Then I joined one.
Minnesota’s unrest is decades in the making. Most Americans just forgot that black Midwesterners exi...