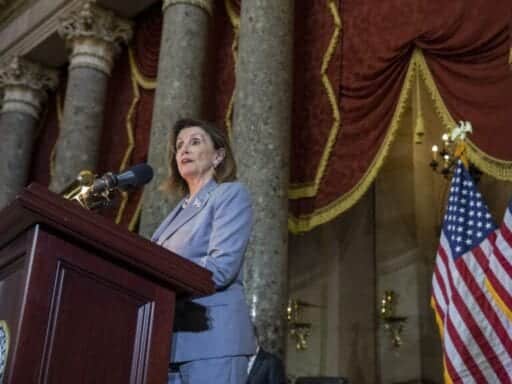 The tide is shifting on impeaching the president within the House Democratic caucus — and fast.

A wave of moderate first-term Democrats from Trump-friendly districts, who up to this point have resisted liberal members’ calls for impeachment, got on board with an impeachment inquiry into President Donald Trump late Monday night. Seven first-term Democrats from conservative districts penned a searing op-ed in the Washington Post calling for an inquiry. About two-thirds of the caucus now support an inquiry, and more are following.

So what changed their minds? New information has emerged about a whistleblower alleging the president made an inappropriate request of a foreign leader, multiple times. Subsequent reporting has revealed Trump allegedly urged Ukrainian President Volodymyr Zelensky to investigate former Vice President Joe Biden’s son Hunter Biden, presumably to dig up dirt on his political enemies, as Joe Biden is running for president. Trump has confirmed some of these details himself, but maintains he did nothing wrong.

“If these allegations are true, we believe these actions represent an impeachable offense,” Reps. Gil Cisneros (CA), Jason Crow (CO), Chrissy Houlahan (PA), Elaine Luria (VA), Mikie Sherrill (NJ), Elissa Slotkin (MI), and Abigail Spanberger (VA) wrote in the op-ed. As of Tuesday morning, nearly half of the 44 vulnerable first-term representatives who flipped Republican districts in 2018 came out in support of an impeachment inquiry.

Soon after the op-d was published, the Washington Post reported the Trump administration had restricted military aid from Ukraine before his call with the country’s president this summer, causing an uproar among Democrats who said this was the clearest demonstration to date of the president using federal aid as a bargaining chip to further his own personal and political gain.

Democrats have so far been divided on impeachment. While liberal members in the caucus have loudly called for it for months, more moderate members who face tough re-elections in 2020 have been far more hesitant.

That dynamic makes this week’s change all the more striking. Moderate members are beginning to throw around the term “impeachable offense,” and House leadership is discussing a resolution to condemn the president — although so far it’s unclear what that resolution will contain.

House Judiciary Chair Jerry Nadler has insisted his committee is already in the middle of an impeachment investigation, so the big question now is whether House Speaker Nancy Pelosi comes out in favor of impeachment as well. She cast doubt on the idea in an NPR interview on Friday, but has spent much of her time since then on the phone with members of her caucus, taking the temperature on impeachment, Politico reported.

Moderate members are an important piece of the puzzle. Pelosi had been treading cautiously on impeachment, partly to protect these members in 2020, and because polls show the majority of Americans don’t support impeachment. The Republican-controlled Senate will almost certainly not act on an impeachment vote. And some fear impeachment could cost Democrats in the 2020 election.

But the new Ukraine scandal is mounting the pressure on Pelosi.

Here’s what an impeachment inquiry would actually do

The House Judiciary Committee is already in the middle of an impeachment investigation, which it took a formal vote on a few weeks ago. Nadler also told MSNBC recently he thought the Judiciary Committee could vote on articles of impeachment this fall. But the decision of whether it gets a vote by the full House rests on Pelosi, who ultimately decides what gets brought to the floor.

Pelosi’s approach thus far has been methodical and slow-moving. We’ve yet to see if the events of this week will change that.

The main tension in the caucus is between the more cautious members, and pro-impeachment members who believe Democrats are letting Trump walk all over them.

But beyond moving towards impeachment, there are other ways Democrats can push back. One such method floated by moderate freshmen members in their letter is inherent contempt.

Inherent contempt is Congress’s ability to arrest, jail, or fine people without court approval if they don’t comply with subpoena requests; essentially turning itself into a court. The power hasn’t been used since the 1930s, and even then, Congress only used the power to detain people temporarily. Congress has never before levied fines as part of its subpoena power. If it did, the move would almost certainly be challenged in court.

As the Trump administration has regularly flouted House Democrats subpoenas, some members have urged leadership to revive inherent contempt to make sure the administration takes them seriously.

Upon adopting a House or Senate resolution authorizing the execution of an arrest warrant by that chamber’s Sergeant-at-Arms, the individual alleged to have engaged in contemptuous conduct is taken into custody and brought before the House or Senate. A hearing or “trial” follows in which allegations are heard and defenses raised.

If judged guilty, the House or Senate may then direct that the witness be detained or imprisoned until the obstruction to the exercise of legislative power is removed.

As Rep. Jim Himes (D-CT), a member of the House Intelligence Committee, told Vox this summer, this likely wouldn’t be a massive court of the entire House. It would more realistically be a select committee created specifically for that purpose.

“There would have to be a trial,” Himes said. “As a practical matter, that would probably have to be done by committee as opposed to the whole House. You would set up a select committee, there would be a trial, a fine would be levied.”

It’s another tool Democrats have in their toolbox, but right now, momentum appears to be growing around impeachment.

Trump’s China fight has extended to TikTok. But is it really a threat?
The coronavirus recession is already here
In the 1970s, “Mamma Desta” turned Ethiopian food into an American fascination. So why did fame elud...
Russia’s coronavirus outbreak is getting bad. Putin says the worst is yet to come.
The fight to expand gun rights may have hit a snag in the Supreme Court
Lil Nas X tried to explain why he came out as gay. Kevin Hart: “So what?”