A whistleblower movie isn’t an obvious fit for Todd Haynes. That’s why he made Dark Waters. 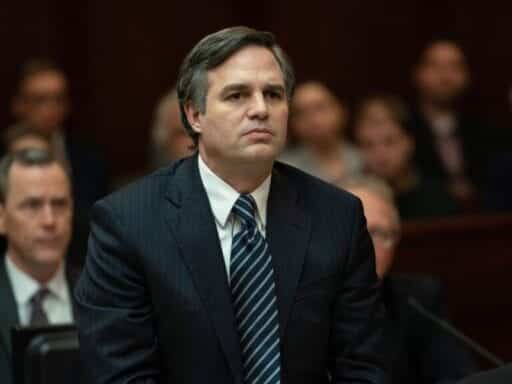 Mark Ruffalo stars in the true-life drama about a lawyer standing up to DuPont Chemical.

Dark Waters isn’t your typical Todd Haynes movie. The director of a varied array of movies like Velvet Goldmine, Far From Heaven, and Carol is known for his pioneering queer cinema and lush, haunting tales of love and fear.

A whistleblower drama based on a real-life story — more a work of social realism and protest than anything else — isn’t an obvious fit for his style, then. Yet Dark Waters still works, thanks to a compelling story and performance from Mark Ruffalo. Based on a New York Times article titled “The Lawyer Who Became DuPont’s Worst Nightmare,” the movie tells the story of Rob Bilott, an attorney at a large corporate firm in Cincinnati who discovers that the people in his West Virginia hometown are becoming ill and dying from mysterious causes that seem linked to the DuPont Chemical plant in town.

The catch: DuPont employs nearly everyone in town. Holding the company to account is a Herculean effort, but it’s even harder when people are afraid to bite the hand that feeds them.

Ruffalo, who optioned the New York Times story for the screen, brought it to Haynes’s attention and plays Bilott. The movie doesn’t have any illusions about heroism; the story spans decades, during which the hopelessness of fighting a giant corporation, even one that’s demonstrably harming the people it’s claiming to help, becomes very clear.

I spoke with Haynes by phone about why he was attracted to this material, why he thinks it’s significant today, and the tricky matter of telling a story with political implications about people who resist political characterization. Our conversation has been edited for clarity.

This movie feels different from your previous work. How did you get connected with it?

[The project] came from Mark [Ruffalo]. It’s not every day that you get something this unique and special from somebody that unique and special. I think I first read it and talked about it with him in 2017. There was an early draft of the script, based on the New York Times exposé by Nathaniel Rich, which had only come out the prior year.

I found the material staggering. It invaded me as a story — the story that Rob Bilott ultimately uncovered about DuPont, but also Rob’s story, the way he found this out [about DuPont], and the kind of series of people that he had to partner with to take on the behemoth.

It took a little time to figure out, and neither of us were sure if we’d be able to do it [for scheduling reasons]. But the next year, they hadn’t found anybody else to do the film, and I said, “Let’s do it.”

So we went to Parkersburg, West Virginia [where much of the film is set], and to Cincinnati [where Bilott’s law firm is located], and we met the people [who were affected in real life]. We felt that there was a deeper story even than what that first draft of the script had described, one that talked even more about the costs that people like Rob go through to unearth a story like this and then stand up to the powers that be.

We had a great sense of urgency about the relevance of this story. So we had a script by the summer of 2018, and we were shooting by January of 2019.

Why did you feel like this story should reenter the spotlight right now? Did you realize the story was linking up with what’s happening in the world right now?

Oh, God, absolutely. Not only the specificity of this story, but the fact that this is an ongoing fight, because companies like DuPont will continue to push back, and rebrand their products, and splinter off into different names. The DuPont name as we once knew it doesn’t even exist anymore. They splintered off into a company called Chemours, which gave them legal sanction to continue making their products with a slight variation, and basically capable of creating the same ailments as the [chemicals they were using in the past] did.

Then there’s just our environmental situation — global warming, and a culture, and a country, and a leadership that favors industry and keeps defanging regulatory oversight. It’s completely subservient to the needs of commercial interest. We need to make a change, and we’re facing an election year.

So the urgency and relevance of it was what made us feel that it was worth trying to get the film out this year, if possible.

When you went to West Virginia to film parts of the movie, how did you explain to them what you were doing? What sorts of reactions did you get from people who were actually involved in the true-life story?

Well, everybody who was on Rob’s side gave us permission to use their names and became advisors on the project. That was not true for anybody on the DuPont side, clearly. So those were all fictionalized characters, but based on real people.

We try to depict how much of a company town Parkersburg is. It’s not easy for people who live in a town like that to pull themselves away from their city fathers and the influencers and the power brokers, the employers of a town like that.

So, people were grateful. People wanted this story to be told and they were eager to share their perspective. It was amazing to have them all with us in so many parts of the process. And as you see at the end of the movie, they literally were sometimes extras in scenes where their characters were being portrayed by actors.

It’s interesting watching the story, because, since 2016, I’ve run across moments on social media where a story will surface about people in “red states” experiencing trauma or trouble of some kind. And then the replies will be something like, “Well, who did they support?” As if a state being “red” or “blue” tells you something about the individual people in that state.

But Dark Waters tells a more complex story about how those allegiances that drive voting are made, and are broken.

Absolutely. None of these people were typical or predictable heroes and protagonists in the story. They don’t have political partisanship, or if they do, it’s sometimes taking the opposing side. Cincinnati is a conservative town, and Rob works at a conservative law firm — a corporate law firm with tremendous influence and prestige, nationally, but particularly in the Midwest. Procter & Gamble is based in Cincinnati and a lot of other Fortune 500 companies are based in Cincinnati. It’s always had a pro-business, Republican brand to it. So he was really going against the powers that be.

To their credit, Rob Bilott and [his colleague] Tom Terp, even before our story begins, were working in Superfund legislation, which is about figuring out who’s to blame for toxic sites in the country that are identified by the EPA, and how to apportion that responsibility among the companies involved. They believe that regulation can work, and they were there to broker the needs of industry against regulation.

So they had every reason to be suspicious about this story when it first landed in their laps, and say, “Oh, there’s got to be an explanation for this. DuPont couldn’t possibly be this reckless. There’s got to be something we can figure out.” But Tom Terp told us, when we Skyped with him the very first time, that this became a holy war for him. I think that’s absolutely true for Rob, as well.

It’s interesting to watch a whistleblower film about a lawyer that doesn’t conform to a lot of tropes of the genre. There are no triumphant courtroom scenes — in a way, this is just a movie about the thankless costs of doing the right thing.

I have always loved the whistleblower genre of films, like Silkwood, or Alan Pakula films that aren’t based on true events, like Klute and Parallax View, which describe a climate of suspicion about power, systems, and surveillance in the ’70s.

Most whistleblower films are based on true stories, and the central characters always confront an element of alienation and isolation — the bigger the story gets, the smaller their worlds become. It’s like the walls start to close in on them. You definitely feel this in All the President’s Men — they’re kind of locked inside the Washington Post offices. The reporters try to interview people, but they get doors slammed in their faces. There’s resistance, there’s shutdown, there’s cover-up that you start to feel. But it isolates them and it makes them pariahs within their own industry.

And this is exactly what everyone in the film faced. What’s so heartbreaking on top of it all is that their experiences brought them all together, but then the pain they feel, the peril that they’re put in, further isolates them in their worlds.

There’s something incredibly lonely in the final act of this movie, where Rob’s awaiting the outcome of the science panel’s findings. He’s helpless. There’s nothing he can do. People are dying of the illnesses that keep spreading within his community, but he feels helpless.

Did you find that you learned something from making this movie?

Everything you do informs your growth as a filmmaker. No matter what I’m doing, I like to feel like I haven’t done it before — that it’s expanding my vernacular, that I’m a student of the medium again. That was absolutely true for this genre of film, which I love, and which I felt this true story enlivened.

There’s a lot of cynicism circulating today, for incredibly good reasons. We all understand why; it’s our way of protecting ourselves. But then you watch a movie like this, and you really feel what people are willing to put at stake, how far they’re willing to go, and the pain that they undergo in the process. This is a good time to be reminded that it really does take individuals working together, using whatever tools they have at their disposal, to challenge corruption and abuse of power. It’s a timely moment for a movie like this.

Dark Waters premiered in select theaters on November 22 and opens nationwide on December 6.

Violent protests against police brutality in the ’60s and ’90s changed public opinion
Student activists want change — and they’re starting in the classroom
#HimToo, the online movement spreading myths about false rape allegations, explained
The 20 best documentaries of the 2010s
Aberdeen, Maryland, shooting at Rite Aid distribution center: what we know
How the West became a self-obsessed culture