A white neighbor called police on a kid mowing a lawn. Later, they called as he played in a yard. 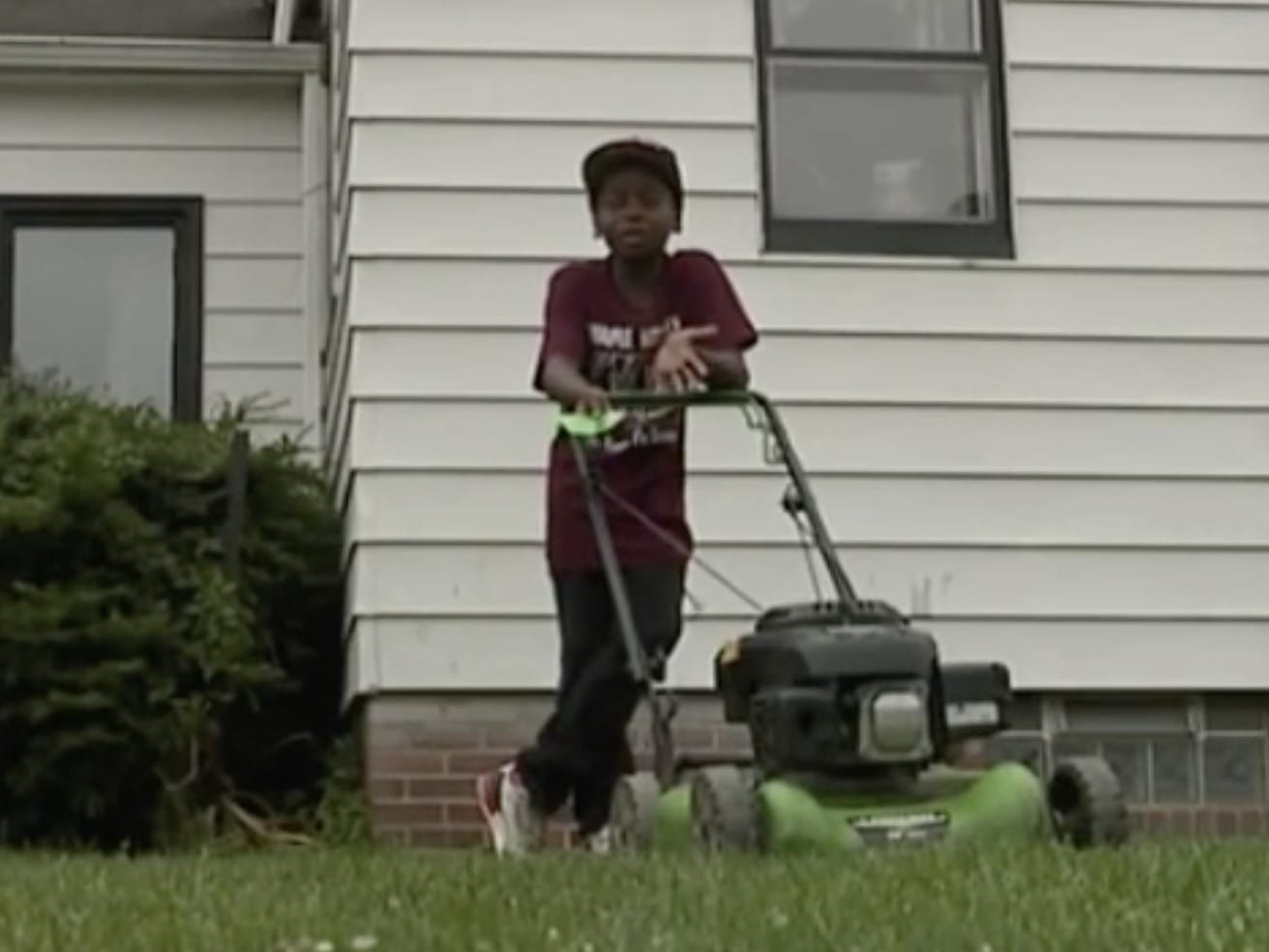 National attention to racial profiling has increased. But white people are still calling 911 for innocuous reasons.

In late June, Reggie Fields, a 12-year-old Ohioan who proudly operates Mr. Reggie’s Lawn Cutting Service, made national headlines after a white woman called the police on him. She had complained that the child, who was cutting her neighbor’s lawn, cut part of the wrong lawn. Nearly two weeks later, the same family called the police on the boy again, this time complaining about Fields and other children playing on a Slip N’ Slide in a neighboring yard.

According to Mic, Linda Krakora called the local police department on July 4, alleging that the children had damaged part of her fence. Fields and other children had been playing in the yard of Lucille Holt-Colden, Krakora’s neighbor and the woman who had hired Fields to cut her lawn on June 23.

Krakora defended the calls in an interview with Mic, and maintained that the race of the children — all of whom were black — “has nothing to do with it.”

“We have always been told by the police that if we feel threatened, ‘Don’t confront these people, just call us,’” she said. “If we feel it’s going to be more of an issue to go over trying to talk to somebody, for our safety, we just call the police.”

Police responded to the July 4 call, but said that the incident was likely a “civil matter.”

Over 18 years, Krakora’s family has made some 60 calls to police, Maple Heights Police Lt. Joe Mocsiran confirmed to Mic. Many of those calls have been about Holt-Colden or members of her family. But when Krakora’s husband called the police on June 23, 12-year-old Fields, who rallies relatives to mow lawns around his Cleveland suburb, found himself caught up in the ongoing hostilities between neighbors.

“They called the police to tell the police that the kids was cutting their grass. Who does that?” Holt-Colden says in a Facebook video of the June incident.

After the situation was explained, the officers left without issuing any citations. But the event still discouraged Fields. “They said I was cutting their grass,” he told local reporters. “I didn’t know it.”

Fields’s original story quickly took off online, serving as one of the latest in a recent wave of highly publicized incidents where bystanders have called police on people of color for trivial matters. Shortly before Fields’s story went viral, a white South Carolina woman dubbed “Pool Party Paula,” made headlines for insulting and hitting a black teenager who was at a community pool with a friend, telling them they didn’t belong there as she threatened to call the police. When officers approached her days later, the woman assaulted them and she was arrested.

In June, a white woman called 911 on an 8-year-old black girl selling water in San Francisco, arguing that the girl’s mother was being too loud and that they were selling the water “illegally.” The woman, Alison Ettel, later claimed that she hadn’t actually called police, but audio of the 911 call proved otherwise. The incident bears a close resemblance to the story of an Oakland woman who called police on a black family in April because they were using the wrong type of grill while barbecuing in a park.

These aren’t the only incidents. Be it a black firefighter doing safety inspections in a largely white neighborhood, black teens shopping for prom at a Missouri Nordstrom Rack, a black family holding a funeral for a loved one, a different black family eating at Subway, or a black real estate investor looking at a property, the past few weeks have seen people of color repeatedly racially profiled, confronted by police, and, in some cases, arrested after white business owners, employees, or bystanders viewed them with suspicion.

Many of the incidents have spread on social media, calling national attention to the issue, especially after two black men, Rashon Nelson and Donte Robinson, were arrested for trespassing in April as they waited inside a Philadelphia Starbucks for a business partner.

It serves as a reminder that decades after the collapse of legal segregation, spaces like clothing stores, coffee shops, and universities remain strongly controlled along racial lines. But it also presents questions of exactly why people are so quick to call police, especially given racial disparities in police use of force that make people of color more likely to encounter violence or harassment.

The incidents of recent months, coupled with academic research on race and policing, suggest that when people needlessly call law enforcement on people of color, it makes existing tensions worse. This new spate of incidents shows that some people don’t really seem to care.

Some white people are calling the police for really minor things

When looking at the incidents that have occurred over the past few months, one thing that stands out is how minor some of the alleged offenses are — and that someone feeling suspicious or uncomfortable is enough to warrant calling law enforcement.

Take, for example, the story of Lolade Siyonbola, a black graduate student at Yale who woke from a nap in a dorm common room only to be approached by police after a white classmate called 911, claiming that she wasn’t sure if Siyonbola belonged in the dorm.

Another: A trio of black filmmakers staying in an Airbnb in Rialto, California, had the cops called on them because they hadn’t waved to a white neighbor, making the woman suspicious. The owner of the Airbnb would later side with the neighbor, saying at a police press conference: “If the kids had simply smiled at (my neighbor) and waved back and acknowledged her and said, ‘We’re just Airbnb guests checking out,’ none of this would have ever happened. But instead, they were rude, unkind, not polite.”

These examples show how people of color are subject to arbitrary social expectations and heightened scrutiny. That scrutiny is common in what Yale sociologist Elijah Anderson refers to as “white spaces,” areas where black people and other people of color are often not present or exist in a limited number. Anderson notes that the consequences of entering these spaces can be severe for a person of color.

But these incidents also may point to something else — like the desire to preserve racial hierarchies by casting people of color as deviants that can be removed at any moment. And because so much of America remains divided along racial lines, black people who enter white spaces are often viewed with suspicion.

These incidents can strain trust between communities of color and police

But another important part of the conversation focuses on why the police are being asked to respond to situations where they aren’t really needed. When white people call law enforcement on people of color for unnecessary reasons, they are adding to an existing problem, since minority groups are more likely to face police violence or harsh punishment from the justice system.

These incidents can have real effects on the relationships between law enforcement and communities of color. Black and white people call law enforcement at different rates, with people of color calling the police far less than their white counterparts. This is driven by a crucial difference in perception: While white people see police as a force that will protect them, communities of color see a force that is more likely to do the opposite.

As Vox’s German Lopez has noted, high-profile incidents of police violence erode trust in law enforcement, and that trust can be difficult to regain. A 2016 study from a group of sociologists at Yale, Harvard, and Oxford found that after the 2004 police beating of Frank Jude in Milwaukee, Wisconsin, residents made 17 percent fewer 911 calls the next year. Those numbers remained low even after the officers involved in the incident had been punished. Researchers found similar results after high-profile incidents of police brutality in other predominantly black communities.

A deterioration in trust can happen even when a fatal police shooting isn’t involved. In 2013, two political scientists, Amy Lerman and Vesla Weaver, looked at the potential effects 311 nonemergency calls have on communities. Analyzing some 3 million 311 call records and 1.2 million police stops in New York City, they found that many of these calls, which are usually used to lodge complaints about minor issues like noise disturbances, were more likely to occur in low-income and minority neighborhoods.

But how police handled these cases had a significant effect on perceptions of local institutions. “When police search a higher number of citizens or deploy more force in their stops of community members, people become much less likely to make claims on local government,” they noted. “Thus, the relationship turns on the quality of policing, not merely the quantity.”

“The gulf between how black America and white America experience the police is vast,” Weaver, now a professor at Johns Hopkins University, wrote for Vox in May, pointing to a dynamic where black communities often struggle to get police to respond to calls for assistance, as white Americans continue to see police as worth calling due to their high response rates. “Black people need to be able to trust that when they enlist the police, they get what whites get — police who show up, take their concerns seriously, and don’t further victimize or retaliate against the citizen,” she added.

But unnecessary interactions between people of color and police could diminish that sort of trust. And for kids like Reggie Fields, the incidents have an additional negative effect, showing that in America black behavior is all too quickly viewed as suspicious and worthy of policing.