A wild card in the 2020 primaries: New Hampshire’s independent voters 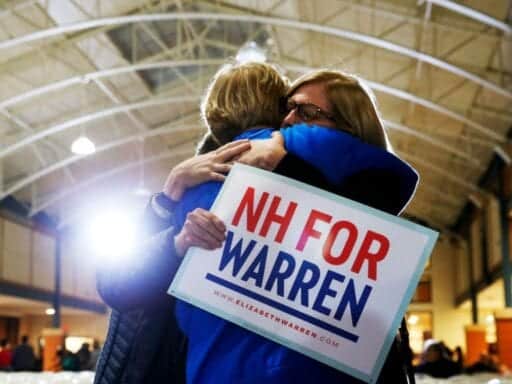 Why presidential candidates are spending so much time courting New Hampshire’s independent voters.

DERRY, New Hampshire — Longtime Republican voter Sheree Dustin is so fed up with the party under President Trump, she may just cast a ballot for former Vice President Joe Biden in the primary.

“I think they’re a mess,” the Hampstead voter told me at a Biden town hall a few weeks ago.

“I think you’re going to see more Republicans moving,” she said. “The independents are going to make it.”

Political experts in the state told me that the vast majority of New Hampshire’s undeclared voters aren’t really independent in the true sense of the word; they are typically Democrats or Republicans who don’t like labels and want flexibility. And while independents like Dustin can certainly juice a candidate’s numbers (they helped give independent Vermont Sen. Bernie Sanders his historic 22-point win in 2016 and propelled John McCain to victory in 2008), they’re typically not enough to swing an election.

“Nobody’s ever won because they won the independents,” said Andy Smith, a University of New Hampshire pollster. Smith, who has polled voters in the state for decades, told me no candidate since 1972 has won without capturing a plurality of the state’s registered voters.

With a close race this year, the impact these voters will have is still anyone’s guess.

Why New Hampshire’s “independents” are so tough to pin down

Every four years, the anticipation grows around how New Hampshire’s independent voters might vote come primary day. New Hampshire votes the week after the Iowa caucuses, making its primary a critical test for candidates.

Out of the more than 977,000 registered voters in the Granite State, about 413,500 are undeclared to either party, compared to the state’s 275,252 registered Democrats and 288,524 registered Republicans. Undeclared voters can choose either ballot in a primary and switch their party back to undeclared with their local election officials after they’ve voted.

There hasn’t been a sudden surge in Republican or Democratic registered voters switching over to undeclared, New Hampshire Deputy Secretary of State David Scanlan told me. But because New Hampshire also allows same-day registration, Scanlan said he’s expecting to see thousands of new voters at the polls on Election Day.

“Most registrations take place on Election Day,” he said. “It will be in the tens of thousands. We won’t know until Election Day.”

The data we have on this group shows undeclared voters are certainly not a monolith, and they don’t vote as a bloc. Polling data collected from 1999 to 2014 by Smith and former UNH political science professor and pollster David Moore showed that about 40 percent of undeclared voters consistently voted Republican and 45 percent Democratic. That left just 15 percent who could truly be considered “independents,” voting for candidates of both parties.

“I would say they’re a less partisan voting bloc,” Smith told me. “They’re not as engaged in politics and they don’t follow politics as much as registered Democrats and Republicans.”

There are a few factors contributing to the fascination with independents in New Hampshire: the importance of the first-in-the-nation primary combined with the state’s very independent — almost libertarian — ethos.

“It’s cool if you’re gay, but keep your hands off my guns,” is how Amherst voter Brendan LeBlanc described New Hampshire’s political identity to me. New Hampshire is a socially liberal and fiscally conservative state, where many Democratic politicians staunchly defend the continued lack of an income or sales tax.

At least in statewide elections, the influence of independents and moderate Republican voters has contributed to a slate of moderate Democrat politicians.

“Where the Democrats have won elections in New Hampshire is with the more centrist Democrat,” said Tom Rath, a New Hampshire attorney and Republican who advised Mitt Romney’s 2012 campaign and Kasich’s 2016 run. “[Sens.] Jeanne Shaheen, Maggie Hassan, clearly [former Gov.] John Lynch were all in that tradition. That is not a hard-left tradition; that is more center-left, very open.”

But in presidential elections, these voters don’t always go for the moderate choice. Independents came out in a huge way for Bernie Sanders in 2016. Primary exit polls showed he won 50 percent of registered Democrats compared to 49 percent for Hillary Clinton. Among independents, Sanders blew Clinton out of the water: 72 percent to Clinton’s 27 percent.

“That’s the closest it’s ever been to winning just among independents,” Smith told me. “A lot of those were younger people. When they show up in the polls, they are undeclared because they had never declared their partisanship before.”

Moderate Republicans have few places to go in the 2020 election

Rath acknowledged his party has become an inhospitable place for moderates under Trump.

“There’s no place for those people to go that has any genuine sort of resonance other than the Democratic Party,” Rath said. But he remained skeptical these moderate Republicans will provide any sort of decisive boost for Biden, Buttigieg or fellow moderate Klobuchar.

“I’d suspect at best it’s going to work on the margins,” Rath said. “It’s not going to be a large number.”

There’s not much for a NeverTrumper to do other than cast a protest ballot for former Massachusetts Gov. Bill Weld in the Republican primary. That’s exactly what Biden volunteer and Derry Republican Jim Morton plans to do. Morton — a Kasich voter in 2016 — says he can’t stand Trump, or the Republican Party under his leadership.

“You’ve got to be kidding me, this Trump guy,” Morton said. “If you’re a bully, you’re arrogant, or you can’t treat people with respect, regardless of their background, I don’t want anything to do with you. I couldn’t vote for him.”

It’s too late for Morton to switch his party affiliation to undeclared to cast a vote for Biden in the 2020 primary, but he hops in his truck with a Biden bumper sticker next to a Ronald Reagan/George H.W. Bush sticker from the 1980 presidential election. And he plans to cast his ballot for Biden in the general election if Biden is the nominee.

Biden isn’t the consensus candidate among former Republicans and Republican-leaning independents. On a recent afternoon I spent shadowing Biden campaign canvassers who were knocking doors in the small town of Loudon, there was the occasional voter stuck between Biden and Sanders, but many more trying to choose between moderates like Biden, Buttigieg, and Klobuchar.

“I have a lot of Republican friends; I think they would have a very hard time supporting someone like Elizabeth Warren right now, but they seem to like Joe, Amy Klobuchar,” undeclared Loudon voter Stan Lloyd told me. “It’s all sort of analyzing, trying to analyze on your own and with your friends.”

Candidates are still courting these voters

While political experts like Smith and Rath agree that moderate Republicans turned independents probably aren’t going to be enough to tip the balance toward one candidate, courting these voters is still a key part of the political message of candidates like Biden and Buttigieg.

Biden often talks about his long track record of working with Republicans in Washington and balks at the notion that bipartisanship is a thing of the past. And at Buttigieg rallies these days, the former South Bend mayor often mentions he’s actively courting voters he calls “future former Republicans.”

“What we’re seeing is a lot of folks when I’m shaking hands after an appearance will kind of reveal to me that they’re exactly that kind of future former Republican I was talking about,” Buttigieg told me in a press gaggle after a Durham town hall. “It’s not about pretending to be more conservative than I am; it’s about recognizing that while we won’t agree on everything, we can agree it’s time to turn the page and deliver a better presidency.”

One of these former Republicans who switched parties and is now supporting Buttigieg is former Lebanon, New Hampshire, Mayor Sue Prentiss. Prentiss was a registered Republican for many years; she even served on the steering committee for former New York Gov. George Pataki’s short-lived 2016 presidential campaign. Prentiss didn’t vote for Trump in either the 2016 primary or the general election, and she is dismayed at the lack of action from her former party on issues such as climate change and gun control reforms like universal background checks.

Democrats “have to make a home for people” like her, Prentiss told me. “I wasn’t happy with the current situation, the current candidate who represented the party I had been affiliated with for years.”

Both moderate candidates like Buttigieg and Klobuchar and progressive candidates like Warren told me they think they are in a position to win over New Hampshire independents, albeit with different methods.

“Independent voters in New Hampshire are like people everywhere,” Klobuchar told me in an interview. “They want to have a check on this president, they want to make sure that you have their backs, and many of them want you to show how you’re going to pay for things. They’re much more interested in concrete plans than pipe dreams.”

Warren, a progressive arguing for “big, structural change,” told me her plans to eradicate money in politics have broad political appeal with voters in multiple parties.

“Democrats, independents, and Republicans understand that this government has just been working better and better and better for rich people at the top and is not working for them,” Warren said. “They’re sick of the influence of money, and that’s the core of my campaign.”

While Prentiss is all-in for Buttigieg, this Republican turned independent is planning to support whichever Democrat wins the nomination. For her, it’s a matter of practicality.

“If Donald Trump is going to go anywhere, then it’s going to be a Democrat taking him out of the White House,” she said.