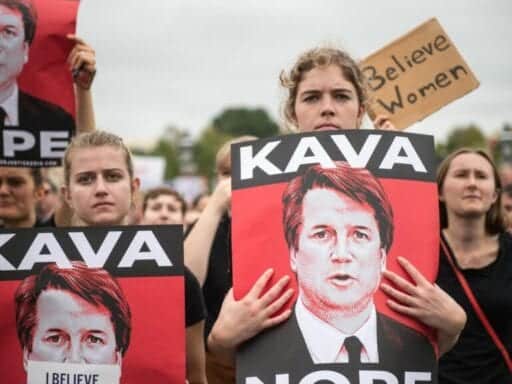 The Supreme Court justice faces a new allegation, and fresh corroboration of an old one.

The report also found the FBI declined to follow up on any of the 25 witnesses Ramirez provided to confirm her allegation, and that the agency also did not investigate the new allegation, which accused Kavanaugh of forcing his penis into the hand of a female classmate while drunk. Ramirez has said the Supreme Court justice did something similar to her at another party, exposing his penis to her, forcing her to touch it in an attempt to get away.

These new allegations emerged just a day after the New York Times reported that the Justice Department will present the prestigious Attorney General’s Award for Distinguished Service to the lawyers who supported Kavanaugh’s confirmation. According to an email reviewed by the Times, Attorney General William Barr will present the award, which typically goes to people or teams who work on prosecution cases, next month; DOJ officials declined to comment.

Kavanaugh vigorously denied this allegation during his confirmation hearing, and also denied the allegation of Christine Blasey Ford, who said he had pinned her down, covered her mouth, and groped her during a high school party. He called these allegations politically motivated, and ultimately squeaked through to being confirmed to the bench by a vote of 50-48.

At the time of Kavanaugh’s confirmation, Democrats raised concerns that he may have perjured himself on several occasions. These concerns were dismissed, however.

But the new account of sexual misconduct, its similarity to Ramirez’s allegations, and fresh information about the number of people willing to confirm Ramirez’s account have once again raised concerns over the justice’s honesty during his confirmation hearings. And the fact he repeatedly denied any and allegations against him have led to new questions over whether Kavanaugh may have perjured himself, as well.

Robin Pogrebin and Kate Kelly, the journalists behind the report, spent 10 months investigating the accusations against Kavanaugh. They found Ramirez’s allegation to be credible, in part because their work showed that Yale students, as well as Ramirez’s mother, had discussed the incident at the party in the weeks following Kavanaugh’s alleged harassment.

The authors were also told of a similar incident at a separate party by Kavanaugh’s classmate Max Stier, who currently runs a nonprofit in Washington, DC. Stier said he told senators and the FBI about his experience with Kavanaugh, alleging the justice forced his penis into the hand of a woman during his freshman year. The FBI did not investigate Stier’s claims, however.

Nor did the agency interview anyone on the list of at least 25 people that Ramirez’s legal team provided in order to corroborate her story. Two FBI agents reportedly told Ramirez that they found her story to be credible, but said that their team could not conduct a full investigation without the support of the Republican-controlled Senate. They, of course, did not have this support, and so no investigation occurred. Ramirez did not testify during the confirmation hearings, either.

Without her present and lacking any questioning of her witnesses, Senate Judiciary Committee Chair Chuck Grassley (R-IA) ultimately found Ramirez’s allegation to be uncorroborated, and almost all Senate Republicans — joined by Democrat Joe Manchin of West Virginia — voted to confirm Kavanaugh.

Kavanaugh declined to be interviewed by the journalists, whose work will soon be collected into a book, and has not released any kind of statement since the new allegations were made public. But on Twitter, President Donald Trump, who nominated Kavanaugh and celebrated his confirmation, blasted the claims and encouraged the justice to begin libel proceedings against his accusers.

Now the Radical Left Democrats and their Partner, the LameStream Media, are after Brett Kavanaugh again, talking loudly of their favorite word, impeachment. He is an innocent man who has been treated HORRIBLY. Such lies about him. They want to scare him into turning Liberal!

Brett Kavanaugh should start suing people for libel, or the Justice Department should come to his rescue. The lies being told about him are unbelievable. False Accusations without recrimination. When does it stop? They are trying to influence his opinions. Can’t let that happen!

The new allegations have led to fresh calls for impeachment

The latest allegations against Kavanaugh, and the new reporting on Ramirez’s witnesses brought on a fresh wave of calls to remove the justice from the Supreme Court Sunday. On Twitter, #ImpeachKavanaugh began trending amid questions of possible perjury, and some Democrats, including presidential candidates Julián Castro, Sen. Elizabeth Warren, and Sen. Kamala Harris joined in these calls for impeachment.

It’s more clear than ever that Brett Kavanaugh lied under oath. He should be impeached.

And Congress should review the failure of the Department of Justice to properly investigate the matter. https://t.co/Yg1eh0CkNl

Last year the Kavanaugh nomination was rammed through the Senate without a thorough examination of the allegations against him. Confirmation is not exoneration, and these newest revelations are disturbing. Like the man who appointed him, Kavanaugh should be impeached.

I sat through those hearings. Brett Kavanaugh lied to the U.S. Senate and most importantly to the American people. He was put on the Court through a sham process and his place on the Court is an insult to the pursuit of truth and justice.

He must be impeached.

Another Democratic candidate, Sen. Amy Klobuchar, did not call for impeachment, but on ABC’s This Week Sunday, said of Kavanaugh’s confirmation process, “I think the whole thing was a sham.”

Sen. Amy Klobuchar on Justice Brett Kavanaugh: “I strongly opposed him, based on his views on executive power, which will continue to haunt our country, as well as how he behaved, including the allegations that we are hearing more about today” https://t.co/gxl9RihwwF pic.twitter.com/pvjUbSfTS9

Kavanaugh’s critics first began contemplating the prospect of his impeachment immediately upon his confirmation, which was voted on by the narrowest margin in 130 years, and which followed three named accusations of sexual misconduct. (A third accuser, Julie Swetnick, said she was gang raped at a high school party at which Kavanaugh was present.)

As Vox’s Dylan Matthews has written, impeaching a sitting Supreme Court justice is a process just like impeaching a president, and requires substantial political support. No Supreme Court justice has ever been removed from office through this process, and judges from lower courts who have been removed from office were typically involved in cases on which both political parties agreed that wrong had been committed:

These five most recent cases involved judges whose wrongdoing was recognized by both political parties in Congress, and who had few if any defenders in the Senate. Kavanaugh and Thomas both have enthusiastic supporters in the Senate, and even if Democrats retake both houses of Congress, it’s doubtful that enough Republicans will defect from Kavanaugh to make removal viable.

That said, there is no clear definition of a “high crime or misdemeanor.”

“The precedents in this country, as they have developed, reflect the fact that conduct which may not constitute a crime, but which may still be serious misbehavior bringing disrepute upon the public office involved, may provide a sufficient ground for impeachment,” Bazan writes, citing the case of Judge John Pickering, who was convicted on charges including mishandling cases in his capacity as a judge. That’s not a criminal offense, but the House and Senate considered it sufficiently serious to justify impeachment.

The bitter political dispute over Kavanaugh’s nomination and confirmation means that no element of the case for or against him will be treated as clear-cut. And with a Republican-majority Senate, it seems unlikely that any case for impeachment will pick up steam. However, Democrats’ calls for an investigation could be answered in the House, where that party has a majority.

The pandemic has exposed America’s clean water crisis
What are the symptoms of the new coronavirus?
Why Jaime will definitely kill Cersei on Game of Thrones
A federal judge blocked New York’s latest attempt to crack down on Airbnb
Tech billionaire Larry Ellison has moved to Hawaii
China has quietly vaccinated more than 100,000 people for Covid-19 before completing safety trials