A young woman disappeared in Iowa. Here’s why President Trump got involved. 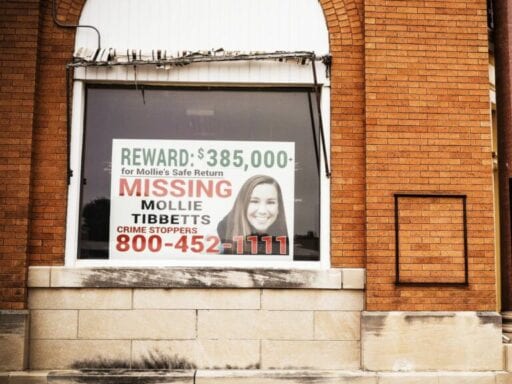 When Cristhian Rivera was charged with murder in the case, Trump started using it to further his anti-immigrant agenda.

On July 18, Mollie Tibbetts went out for a run and didn’t come back. The 20-year-old University of Iowa student was back in her hometown of Brooklyn, Iowa, for summer break, working at a day care program and staying at her boyfriend’s brother’s house, according to the Des Moines Register.

When she didn’t show up for work on July 19, her boyfriend and family reported her missing.

On August 21, police recovered what they believe to be her body in a cornfield near Brooklyn.

The story is a tragedy, an irreparable loss for Tibbetts’s family and community. It’s an illustration of the many inequities in the way American media outlets cover missing persons. And now, thanks to President Trump, it’s become a political hot button — even though that’s not what some of Tibbetts’s family wants.

When Tibbetts, a young white woman, disappeared, her case received intense investigation by police and national media attention. Now, a man named Cristhian Bahena Rivera has been charged with murdering Tibbetts, and local authorities say he is an unauthorized immigrant. The case has caught the eye of President Trump — and it’s likely to receive even more attention than before, since it plays into Trump’s false narrative that immigrants are dangerous killers.

Law enforcement and ordinary concerned citizens pulled out all the stops to look for Tibbetts. Police reviewed hours of surveillance footage, interviewed hundreds of people, and searched local farms and other locations for any sign of her. The FBI stepped in to help Iowa authorities search her Fitbit and other devices for clues. State authorities made a website, FindingMollie.iowa.gov, to collect tips from the public. A reward fund meant to encourage people to come forward with information about the case drew more than $250,000 in donations from people around the country.

Meanwhile, national media took notice of the story. In July, Associated Press reporter Ryan J. Foley interviewed Tibbetts’s boyfriend’s brother, Blake Jack, who had canceled his wedding plans when she disappeared. Another AP story the same month focused on the search of Tibbetts’s Fitbit. When a body believed to be Tibbetts was found in a cornfield on Tuesday, CNN, People, the New York Post, and Fox News all reported the news.

While the media coverage may or may not have helped with the investigation (it’s not clear what role tips from the public may have played, if any), it did emphasize that Tibbetts’s disappearance mattered, that she and her family were human beings worthy of audiences’ empathy and concern.

In an in-depth profile published on Monday at the Des Moines Register, Luke Nozicka describes Tibbetts’s playful relationship with her father, her love for her boyfriend, and her work with children. Family and friends “know Tibbetts as much more than the two-dimensional posters seen on TV,” Nozicka writes. As her boyfriend puts it, “she’s not just a flyer.”

But the chance to be more than a flyer — or even to be on a flyer at all — isn’t one that every victim gets. In a 2016 study, sociologist Zach Sommers found that missing white women received a disproportionate amount of news coverage compared to women of color and men — half of the articles about missing persons that Sommers studied were about white women, though white women are only about a third of the population, according to NPR.

The disappearances of women of color, meanwhile, don’t always get the attention they deserve. Native American women, for instance, are disproportionately likely to be murdered or sexually assaulted, and at least in some areas, they are overrepresented among missing persons — but there is no comprehensive national data on their disappearances. Last year, advocates used the hashtag #MissingDCGirls to draw attention to the number of missing black girls in the nation’s capital. Authorities said there was no spike in missing black children, but as Vox’s Aja Romano wrote, the episode shined a light on the lack of news coverage young people of color get when they go missing.

Trump is using the Tibbetts case to push falsehoods about immigrants

Tibbetts’s case received attention around the country long before a suspect was identified. But the focus intensified on Tuesday, when it was revealed that Rivera had been charged with murder in connection with the case. The Des Moines Register reported that Rivera, 24, had told authorities he chased Tibbetts while she was running on July 18, then “blacked out” and woke up near an intersection. He led police to Tibbetts’s body in the cornfield.

The paper also reported that local law enforcement had identified Rivera as an unauthorized immigrant. This fact apparently caught the attention of President Trump, who, as Vox’s Dara Lind notes, has made the supposed criminality of undocumented immigrants a central part of his message as both candidate and president.

For 34 days, investigators searched for 20-year-old Mollie Tibbetts. Yesterday, an illegal alien, now charged with first-degree murder, led police to the cornfield where her body was found.

The Tibbetts family has been permanently separated. They are not alone. pic.twitter.com/BBskwHEJoU

Later on Wednesday, Trump said in a video posted on Twitter, “Mollie Tibbetts, an incredible young woman, is now permanently separated from her family. A person came in from Mexico illegally and killed her. We need the wall. We need our immigration laws changed.”

Rivera’s actual immigration status is now the subject of some debate. In court documents, his lawyer says he is in the country legally, and takes the president to task for stepping into the case: “Sad and sorry Trump has weighed in on this matter in national media which will poison the entire possible pool of jury members,” the lawyer writes, according to the Des Moines Register.

As Lind notes, Rivera’s lawyer has not specified what his client’s actual legal status is, and a spokesperson for US Citizenship and Immigration Services told a BuzzFeed News reporter, “We have found no record in our systems indicating he has any lawful immigration status.”

Meanwhile, some of Tibbetts’s family members have criticized those who are using her death to spread anti-immigrant sentiment. “Stop being a fucking snake and using my cousin’s death as political propaganda,” one family member tweeted on Tuesday at conservative activist Candace Owens. “Take her name out of your mouth.”

And regardless of Rivera’s legal status, the fact remains that immigrants in general are much less likely to commit crimes than people born in the United States, as Vox’s German Lopez points out. The narrative that Trump has been peddling since he announced his candidacy — that immigrants are “bringing crime” to American soil — has always been a false one.

But that likely won’t stop the administration from using Tibbetts’s death as a political football in the months to come, especially as the country gears up for midterm elections. As Lind notes, Trump has made the killings of American-born people by immigrants a kind of cause célèbre, appearing at events with the family members of victims and holding a gathering for “permanently separated” families of victims as his administration was being criticized for separating children from their families at the border.

The most moving coverage of Tibbetts’s disappearance painted a picture of the missing young woman as a unique person with hopes and dreams, strengths and foibles — recalling her terrible driving and her messy room, her father told the Des Moines Register, “we’re trying really hard to not make her Saint Mollie.” It’s what any missing person deserves — to be treated like a human being. Unfortunately, the president seems to be treating her like a political opportunity.

Amy Coney Barrett, Trump’s Supreme Court nominee, has a years-long record of ruling against immigran...
Former Auburn football coach Tommy Tuberville flips Alabama Senate seat back to Republicans
Some senators want to stop police from getting military-grade equipment or weapons
What does it mean to be an ethical biohacker?
2020 was a time warp
Why Republicans keep talking about Amy Coney Barrett’s 7 kids