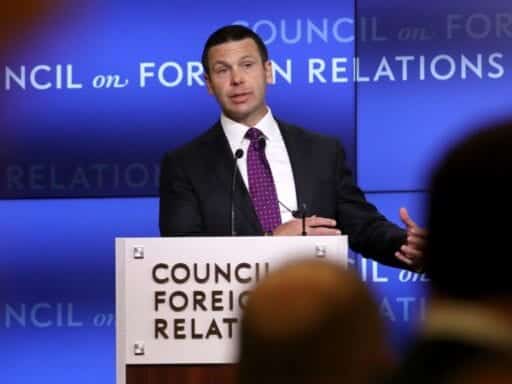 Kevin McAleenan, the acting Secretary of Homeland Security who attempted to distinguish himself from immigration hardliners in the Trump administration while leading the agency charged with carrying out its policies, announced Friday night that he is leaving the agency.

A career law enforcement official, McAleenan served longer than any other DHS head without Senate confirmation, assuming his acting post in April after his predecessor Kirstjen Nielsen was asked to resign.

During McAleenan’s tenure, President Donald Trump got what he wanted: The number of migrants apprehended at the southern border fell to about 52,000 in September from almost 133,000 at their peak in May. Trump has considered it a crisis worthy of declaring a national emergency, as he did in February, referring to it repeatedly in public remarks and campaign ads as an “invasion” of migrants.

He struck international deals that would force migrants seeking asylum to return to Central American countries struggling with high levels of crime and violence. He implemented the administration’s Remain in Mexico policy — under which over 50,000 migrants have been sent back to back to Mexico while they await decisions on their asylum applications — across the entire southern border.

He rolled out the so-called public charge rule, which was blocked by courts but would make it more difficult for low-income immigrants to legally enter and settle in the US. And he ended the administration’s practice of releasing immigrant families from detention into the US, which Trump has called “catch and release,” instead sending them to Mexico.

But McAleenan, who has reportedly been frustrated by the Trump administration’s immigration rhetoric, has long flirted with resigning.

In June, CNN reported that he was ready to hand in his notice after Trump tweeted that he would “begin the process of removing the millions of illegal aliens who have illicitly found their way into the United States.” And in a profile in the Washington Post in October, he gave what looked like an exit interview, in which he suggested that he was an outsider in the administration and that DHS’s public image was hurting its agenda.

On Friday night, McAleenan announced that he was making it official.

I want to thank the President for the opportunity to serve alongside the men and women of the Department of Homeland Security. With his support, over the last 6 months, we have made tremendous progress mitigating the border security and humanitarian crisis we faced this year… pic.twitter.com/A4rTcZgJKF

Trump’s DHS secretaries have tried to distance themselves from his policies.

McAleenan has publicly tried to paint himself as a moderate placed in an impossible position by a president with extreme views on immigration, particularly when it came to carrying out policies aimed at restricting asylum.

McAleenan’s primary focus in recent months has been brokering what he calls “cooperative agreements” with countries in Central America that produce the highest number of migrants claiming asylum in the US: Guatemala, El Salvador, and Honduras. The agreements would require migrants on their way to the US to seek protections in those countries first, effectively cutting off their access to the American asylum system before they even reach the southern border.

McAleenan — who was a vocal supporter of increasing aid to Central America before he became acting secretary — has framed these agreements as a way to help the countries develop their asylum systems, including a pledge of $47 million to Guatemala for that purpose and a “commitment” to help build capacity in El Salvador. But the deals would return migrants to countries with high levels of crime and violence, and have been criticized for having the potential to worsen what is already an acute humanitarian crisis in the region, putting migrants’ safety at risk.

McAleenan, though, has had a reputation as more moderate on immigration than the hardliners in the White House. For example, he pushed back against other officials who wanted to arrest immigrant families en masse in June, believing that it would thwart the administration’s efforts to obtain more funding to deal with the migrant crisis on the border.

McAleenan said in a recent interview with the Washington Post that, while he controlled DHS’s operations on the ground, he was not directing how policies were communicated publicly.

He expressed regret at his role in coauthoring a memo that led to the Trump administration’s “zero tolerance policy,” which led to the separation of almost 4,000 immigrant families at the border.

“What I don’t have control over is the tone, the message, the public face and approach of the department in an increasingly polarized time,” he told the Post. “That’s uncomfortable, as the accountable, senior figure.”

McAleenan is not the first in his position to feel alienated for his more moderate views — and to use those opinions to his advantage.

Toward the end of Nielsen’s tenure as the head of DHS, she too struggled with her image; she was berated by Trump privately for failing to carry out his demands to close down the border entirely. Politico reported that when she was under pressure to resign her “allies began spinning a narrative of her tenure that casts her not as an enabler of President Donald Trump’s most controversial immigration policies, but as a guardrail against even more extreme action.”

She has since returned to the Trump administration in an advisory role at DHS.

Ken Cuccinelli is in the running to replace McAleenan

McAleenan, for his part, rarely appeared in public to defend the agency’s policies.

Acting US Citizenship and Immigration Services Director Ken Cuccinelli has become the de facto spokesperson for Trump’s immigration policy, even when it technically goes beyond his job description.

Cuccinelli is now reportedly the favorite to succeed McAleenan at DHS — a move that would give Trump an acting secretary who appears to agree with him on both style and substance.

Cuccinelli has made regular talk show appearances. Most infamously, he proposed an amendment to Emma Lazarus’s famous poem on the Statue of Liberty in an interview with NPR: “Give me your tired and your poor who can stand on their own two feet.” Taking cues from Trump, he also tweets prolifically, lambasting the “radical left” and reporters whom he accuses of misquoting him.

Immigration advocates, however, are challenging the constitutionality of Cuccinelli’s appointment at USCIS, which could (but likely won’t) derail his nomination at DHS.

A lawsuit brought by the National Immigration Law Center argues that Cuccinelli’s appointment violates the Constitution’s Appointments Clause, which requires Senate confirmation of nominated officials, and the Federal Vacancies Reform Act, which establishes requirements for an official to be able to serve in an acting capacity.

They argue that Cuccinelli’s appointment was unlawful because was never confirmed by the Senate for any federal position, nor had he ever worked for USCIS prior to being appointed to the newly created position of its “principal deputy director” before quickly being nominated as the acting head.

But it’s likely that the White House will defend Cuccinelli, since he has on many occasions gone to bat for Trump’s immigration policies.

Who will win the Oscar for Best Picture? Here are the films with the best shot.
These 5 people are still waiting for their stimulus checks
Trump’s case against mail-in voting has become increasingly desperate. His latest briefing showed it...
11 Senate races Democrats are eying in 2020, briefly explained
Trump supporters storm the US Capitol: The latest
An intriguing development in Mueller’s effort to question Trump