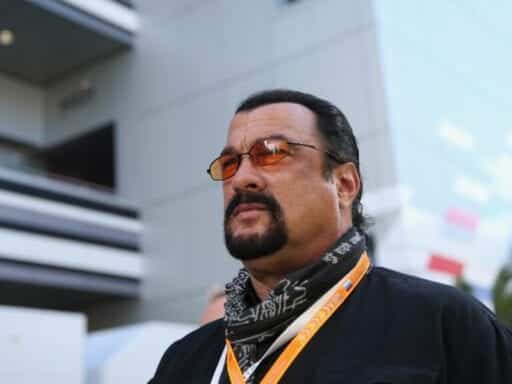 Interesting move by someone who once starred in a movie called The Patriot.

If you thought things between the US and Russia couldn’t get any weirder, there’s this: The Kremlin has named famed martial artist and actor Steven Seagal as a special envoy to the United States.

Yes, this is a thing that is really happening in 2018.

Seagal’s unpaid and mostly ceremonial position will have him working with US officials on humanitarian issues between the US and Russia, as well as other matters that come up “in the field of culture, arts, science, education, sports, public and youth exchanges,” according to a statement by Russia’s Ministry of Foreign Affairs on Facebook.

Seagal is excited about the opportunity. “I am deeply humbled and honoured to have been appointed as a special representative of the Russian Foreign Ministry in charge of Russian and American Humanitarian ties,” Seagal tweeted on Sunday afternoon. I take this honour very seriously.”

This isn’t the first time Russian President Vladimir Putin has considered Seagal for a quasi-diplomatic position: Buzzfeed News reported in 2015 that the Kremlin considered naming the actor an honorary consul of Russia in California and Arizona as a way to improve ties between the US and Russia. “Our reaction was, ‘You’ve got to be kidding,’” an unnamed US official told BuzzFeed about the proposition at the time.

I am deeply humbled and honoured to have been appointed as a special representative of the Russian Foreign Ministry in charge of Russian and American Humanitarian ties.
I hope we can strive for peace, harmony and positive results in the world.
I take this honour very seriously pic.twitter.com/LTuUxsk1aZ

The Michigan-born actor, whose grandmother was born in Vladivostok, became a Russian citizen in November 2016 (while keeping his US citizenship) and has since become a close friend of Putin.

They first met when Seagal’s band — yes, he’s a musician, too — performed for Putin. They have since connected over martial arts, a favorite discipline for both men, and Seagal even attended Putin’s latest inauguration ceremony.

But there’s another reason Putin keeps the actor around: Seagal has remained a full-throated Putin defender, even as revelations of Russia interference in the 2016 presidential election surfaced.

“For anyone to think that Vladimir Putin had anything to do with fixing the elections or even that the Russians have that kind of technology is stupid,” Seagal told the UK’s Good Morning Britain on September 27, 2017, saying Putin’s name with a Russian accent. He’s even gone so far as to call Putin “one of the great living world leaders.”

In 1998, Seagal starred in a movie called The Patriot. Twenty years later, it’s unclear if anyone would use that word to describe the actor now.

Meghan Markle says the royal family was “concerned” about her future child’s skin color
Why Republicans are failing to govern
Photos capture the stark contrast in police response to George Floyd protests vs. anti-lockdown prot...
This man has donated at least 10% of his salary to charity for 11 years running
The first 2020 presidential debate
Bloomberg’s first TV interview showed him to be exactly who progressives feared he was