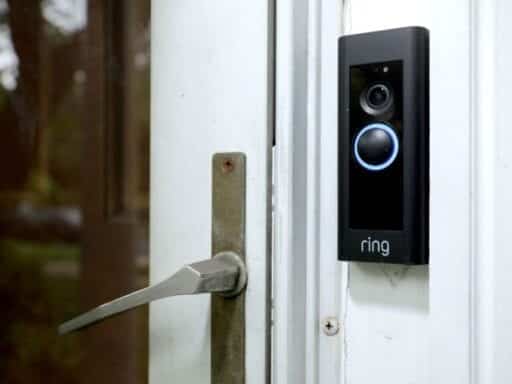 Share
Loading...
A doorbell device with a built-in camera made by home security company Ring is seen on August 28, 2019, in Silver Spring, Maryland.  | Chip Somodevilla/Getty Images

“With no oversight and accountability, Amazon’s technology creates a seamless and easily automated experience for police to request and access footage without a warrant, and then store it indefinitely.”

The video doorbell company has more than 400 partnerships with police. These agreements permit law enforcement officers to directly contact Ring owners and ask for video to use when investigating nearby crimes. These partnerships sometimes also include free or discounted Ring products that police distribute to residents in their communities. Ring users are able to post footage to Ring’s Neighbors social media app, where users can view and comment on videos.

In their letter, the civil rights organizers emphasized a number of concerns about the partnerships, including the possibility that video footage could be misused, that employees at Amazon have access to the footage, and that Ring might incorporate facial recognition technology with the surveillance doorbells.

Beyond these concerns, an expanding network of Ring surveillance has other impacts on communities, including giving people the false sense that crime is on the rise in an area, even as crime rates nationwide are declining. Ring’s Neighbors can also disproportionately affect people of color by exacerbating existing biases: Racism and racial profiling have proliferated on the app.

“With no oversight and accountability, Amazon’s technology creates a seamless and easily automated experience for police to request and access footage without a warrant, and then store it indefinitely,” they wrote. “In the absence of clear civil liberties and rights-protective policies to govern the technologies and the use of their data, once collected, stored footage can be used by law enforcement to conduct facial recognition searches, target protesters exercising their First Amendment rights, teenagers for minor drug possession, or shared with other agencies like ICE or the FBI.”

Ring said a number of the civil rights organizations’ claims are inaccurate, including the idea that Ring is a threat to civil liberties.

“Ring’s mission is to help make neighborhoods safer. We work towards this mission in a number of ways, including providing a free tool that can help build stronger relationships between communities and their local law enforcement agencies. We have taken care to design these features in a way that keeps users in control and protects their privacy.

The Neighbors app has strict community guidelines, trained moderators, user flagging capabilities and other tools in place to create a safe place for all members of the community to talk about what’s happening in their neighborhoods. All content submitted to our app is reviewed to ensure that it adheres to our community guidelines, including our policies against racial profiling and prohibiting hate speech or other forms of prejudice before it goes live on the platform. We take this very seriously and have invested many resources, tools, and human power to ensure we uphold a standard of trust and civility.”

As to Ring or Amazon employees having access to video feeds, the spokesperson said that was “categorically false.”

“We have strict policies in place for all our team members and we implement systems that restrict and audit access to information. We hold our team members to a high ethical standard and anyone in violation of our policies faces discipline, including termination and potential legal and criminal penalties. We have zero tolerance for abuse of our systems and if we find bad actors who have engaged in this behavior, we will take swift action against them.”

Ring did not respond about fears of what might happen with video footage once it’s turned over to police.

The intent of the activists’ letter is to get elected officials to end or at least look into police partnerships with Amazon.

“I don’t think they should have for-profit surveillance partnerships with companies like Amazon without getting express permission from the city council or mayor or without having some community input,” Evan Greer, deputy director of Fight for the Future, which organized the letter, told Recode. She added that the group reached out to city council members who had no idea their police departments had partnerships with Ring.

“Amazon has found the perfect end run around the democratic process: Getting the police to market their products to private individuals and then giving the police a seamless process for accessing the footage those individuals are collecting, with no meaningful oversight from the community,” Greer said.

Ring has long faced criticism from activists, but this is the first time a significant number of them have come together to pressure lawmakers about their concerns.

How the pandemic got people smoking again
Lawrence Wright’s new pandemic thriller is infuriating to read
The loneliness of being mixed race in America
The Senate won’t consider urgent coronavirus legislation until next week
How common is Covid-19? What two controversial antibody studies can and can’t tell us.
Why Trump’s goal to end social distancing by Easter is so dangerous