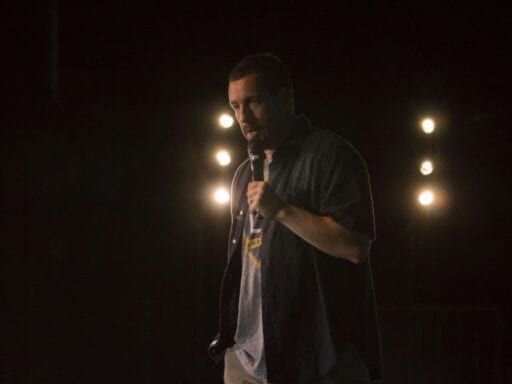 In his new Netflix comedy special, Sandler succeeds by opening himself up to failure.

That divide mostly has to do with the generally juvenile bent of his oeuvre, which most recently has comprised such works as Grown Ups 2 and The Ridiculous 6; the latter is part of the four-movie deal he signed with Netflix because “Netflix rhymes with Wet Chicks.” Compare those roles to Sandler’s remarkable turns in movies like Punch-Drunk Love and The Meyerowitz Stories, and it becomes a little harder to clearly define what he’s all about.

It has the plenty of the dick jokes you’d expect, but it’s also (mostly) packed with the earnestness, honesty, and weirdness you find in his best work. In that respect, it feels like a successor to (and improvement upon) Sandy Wexler, the third of his four Netflix films. Sandy Wexler (preceded by The Ridiculous 6 and The Do-Over, and followed by The Week Of) was a strange movie, mostly because Sandler was doing a bit the whole time as a clueless, nebbishy talent manager — yet he still managed to convey that it was completely heartfelt (the title character is based on Sandler’s real-life manager, Sandy Wernick).

That improbably poignant tone persists in 100% Fresh. It’s a compelling showcase of Sandler’s stand-up, and it falls perfectly in the middle of what appears to be something of a Sandlerssance.

100% Fresh is chill. The special, cut together from multiple performances at wildly varying venues all around the country, is mostly comprised of Sandler roaming about any given stage, firing off jokes about sex and the quirks of genitalia between interstitials of him dancing and making silly faces. In other words, there’s plenty to reinforce Sandler’s reputation as a relatively lowbrow goof.

But from the get-go, there’s also plenty of material that helps explain why Sandler has remained a recognizable name in the pop cultural sphere for almost three decades. 100% Fresh opens with Sandler in rehearsal, strolling onstage to greet an empty theater with a sweet song that turns out to be about the deadliness of electric cars. The empty theater is key: It’s a change of pace from the usual stand-up intro featuring a packed house and rapturous applause. The applause kicks in soon enough, as the entire rest of the special features an audience, but 100% Fresh starts off on a strangely vulnerable foot.

It’s that vulnerable quality that suffuses Sandler’s best work, and it works a kind of magic here. It’s not that he doesn’t care what the audience thinks of him; rather, he just seems more concerned with opening himself up to human connection.

The strangest venue in which Sandler is seen performing is, no contest, a New York subway station (Times Square, if I’m not mistaken). As he sings, dressed in a hoodie and sunglasses, he doesn’t attract much of a crowd — as far as subway buskers go, he bombs. But he doesn’t seem mad or disappointed; rather, he laughs. He’s just having a good time. That the audience at home is allowed to see him fail is the whole point.

His best jokes in 100% Fresh are about connecting with other people, too. Early on, he tells a story (and sings a song) about his his father shaves once every 10 years, and how those decennial shaves were the only time Sandler can recall seeing his father look vulnerable. It’s a quick, relatively thin gag, mostly made by Sandler’s impression of his father immediately post-shave. But something about it still sticks.

The end of 100% Fresh is an unexpected punch to the gut.

For the most part, the songs that Sandler sings throughout the special are built around simple jokes, even more simply constructed; one of them is just “Uber driver smells bad” ad nauseam. But as the special nears the end of its 73-minute running time, the fact that something different lies ahead suddenly becomes clear when Sandler tells the audience, “I hope you like it, it means a lot to us.”

It’s the first time in the special that he really addresses the fact that people might or might not love what they’re seeing.

And it’s the last thing he says before he launches into a song about Chris Farley.

No bits, no jokes — it’s a completely heartfelt tribute to the late comedian, who was one of Sandler’s fellows on Saturday Night Live. Though the camera lingers on Sandler as he plays a guitar solo, it’s clear that this moment is meant to be larger than him. In the background, footage of Farley’s SNL days segues into old childhood photos and videos of Farley, and Sandler effectively cedes the stage.

It’s an immensely and strikingly personal ballad, and it’s almost inconceivable coming from the same person who made the aforementioned “wet chicks” joke. It’s just as surprising as when, in the last segment of the special, Sandler actually comes across as sheepish when making a joke about sex. He’s been shameless, otherwise, but in his final song, which is dedicated to his wife (whose “pussy farts” he’s already discussed at length by this point), he seems embarrassed.

Despite all of the bits in 100% Fresh that may come off as stereotypical Sandler (despite a large fanbase, he is not universally beloved, as emphasized by the special’s title, which refers to the low scores his work has received on Rotten Tomatoes), it’s impossible not to admit that 100% Fresh is a disarming piece of work. The gross-out humor, the dick jokes, the use of repetition as a comic device — they’re not meant to necessarily be low-hanging fruit or to hold an audience at arm’s length. They’re a silly, shared point of connection, and as such, they’re part and parcel of what makes Sandler great.

His best work uses these crasser topics as a way of cushioning the more earnest ones he wants to address — after all, who’d have thought that a stand-up show would end with an in memoriam? And, now in his 50s, Sandler seems to have a healthy sense of self-awareness. He refers to himself as “the Sandman” multiple times throughout 100% Fresh, but it’s not a holy title or a way of pumping himself up. It’s a term of endearment — again, a point of connection, as audience members scream it out, too. But, like the song about Chris Farley or the song about his wife, it’s not about him. This time, it’s about the audience.

Did the president obstruct justice? I asked 12 legal experts.
How the Democrats’ takeover of Virginia could end up preserving Ruth Bader Ginsburg’s legacy
Game of Thrones took over Bud Light’s Super Bowl commercial
The DNC is a reminder that America is a big, diverse country, racked by disaster
Trumpworld’s “the media is trying to cause a recession” conspiracy theory, explained
Hurricane Dorian is pummeling the Bahamas and heading “dangerously close” to Florida