After a controversial season finale, The Magicians is leaning into grief 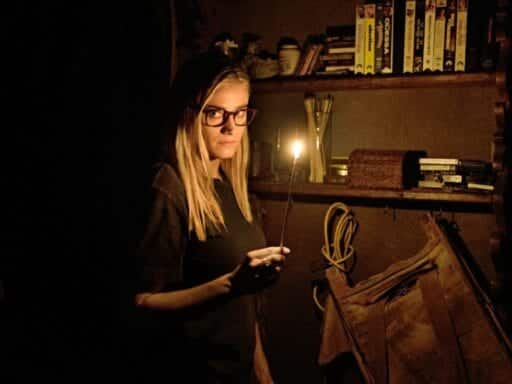 The apocalypse and grief aren’t so different, after all.

The concept of the end of the world comes up frequently on The Magicians, Syfy’s gloriously wild fantasy TV series about depressed 20something magicians, based on Lev Grossman’s best-selling book trilogy. But the show’s upcoming fifth season — which debuts Wednesday, January 15 — really feels like it might be staring down the End Of The World, on both a textual and metatextual level.

“It’s traditional that season five is the apocalypse season,” Magicians co-creator and executive producer Sera Gamble said at a press event the show held in December. “It just happens on shows like this, where each season the Big Bad gets a little bit bigger. … The fear is always that the plot and the stakes get so big that the intimate moments between characters are lost because you don’t have time to do it. A shark is about to eat your face.”

In the world of The Magicians, there’s always a metaphorical shark about to eat somebody’s metaphorical face. But as the show launches its fifth season, the shark is now about to eat the show’s face, if you’ll let me stretch this metaphor to its absolute breaking point.

The Magicians’ season four finale was controversial — to put it mildly — among the show’s passionate cult fanbase. To this day, mentioning The Magicians offhand on Twitter often invites discussion of just what happened in that finale, some of it angry. I’m going to spoil what happened in a moment; for now, let’s say an incredibly important character died. (You can read more from me on this topic right here.)

But The Magicians has an ace up its sleeve — if season five tends to be the apocalypse season on genre shows, it’s also often the grief season. On Buffy the Vampire Slayer, Buffy fought a god and grieved the death of her mom. On The X-Files, Mulder and Scully nearly lost each other and tried futilely to stop the alien conspiracy from invading the Earth. On Supernatural, where Gamble cut her teeth, the Winchester brothers kinda sorta lost everything on their way to the actual apocalypse with God and the Devil and all that jazz.

And when I asked Gamble if maybe it was intentional to line up the apocalypse with the grief The Magicians’ characters feel over season four’s big death, she simply grinned.

How grief unites the characters of this often scattered show

In The Magicians’ season four finale, the series killed Quentin Coldwater (Jason Ralph), who had been its protagonist and the audience’s window into the world of magic since its debut. Quentin’s main function in the story was to knit everything together. If you had two characters who didn’t seem to have a connection, Quentin was often the shortest possible route between them because he knew everybody.

So the irony is that, from a purely logistical standpoint, Quentin’s death ended up helping the writing team craft a more cohesive start to season five than the show had in season four. (That season dawdled quite a bit before the halfway point kicked the story into gear.) Now, every character has something immediate to react to, and the show’s habit of scattering those characters across dimensions, timelines, and universes (sometimes four or five at a time) has a thematic throughline that cuts across the distance.

“There was a fear of, without Quentin, the show splinters off into six different tiny shows that don’t really relate to each other. But it actually did the exact opposite, I think,” said executive producer Henry Alonso Myers. “His death, in the same way that a death in real life brings a family together because they haven’t seen each other for a while, his death really centered the show, especially in the beginning [of the new season] because all our characters were feeling the same thing in completely different ways. But they have a singular touchstone.”

And at the same time, the characters realize they’re facing the end of the world — and maybe the ends of the world. In true Magicians fashion, the season will feature multiple apocalyptic scenarios, which could feel over the top but for the fact that in reality, the 24-hour news cycle achieves roughly the same effect every day.

The quest for the season, such as it is, begins when a strange creature approaches Julia (Stella Maeve) — the character who’s closest to being the show’s protagonist at this point in its run — and tells her the world must be saved. But the creature would rather have someone who, y’know, looks like a protagonist pull off this task.

The Magicians has always cheekily leaned into the idea that heroes in fantasy stories too often look like Quentin — which is to say white, male, and conventionally attractive. But most of the show’s characters other than Quentin haven’t fit that paradigm, and arguably Quentin himself, who was bisexual, didn’t either. So killing off Quentin also functions as a kind of meta-commentary on The Magicians’ earnest attempts to transcend both its genre and its source material, in which Quentin remains alive through the end. (The show’s producers consulted with Grossman when they first considered killing Quentin, and he gave them his blessing.)

As audacious as it was, the choice to kill Quentin caused at least some of the show’s audience to rebel. Quentin might have been just another white guy protagonist — but he also had rich storylines about his struggles with depression and a complicated romantic history with his friend Eliot (Hale Appelbaum). As one of the few characters with mental illness and one of the few bisexual men on television, Quentin meant a lot to a lot of viewers, and in 2020, when a show can be kept alive single-handedly by a particularly passionate fanbase, alienating any portion of that fanbase is dangerous.

“I think our job is to be really strict with ourselves when we’re writing something like [Quentin’s death],” Gamble said. “You can’t just toss off something like that. We didn’t do any of that lightly. Shows have to pick a lane. We’ve picked like six or eight lanes on this show, but we do know what those lanes are, and that’s important because you have to know what to be able to prioritize. In a world where you can make choices to keep safer or take more risks with your story and you know that your story needs risk to live, knowing why you make the show, knowing the most important kind of stories that you want to tell — that really is our North Star.”

How grief can feel like the apocalypse (and vice versa)

And yet the fans’ passionate outcry after Quentin died ultimately worked its way into the show.

“We started working on the new season right when the end of the previous season was airing. We were working on the outlines for season five, episodes one and two, at the craziest moment in terms of the reaction from the fans,” said executive producer David Reed. “So you can’t help but have that in your head and in your heart when you’re working on something that’s creative. There’s some of that in the way that we chose to have the characters deal with their grief.”

I hadn’t seen any episodes of the new season when I talked to The Magicians’ creative team about what to expect, but now, I’ve seen the first three. They’re real and raw, but they’re also funny and frantic. They’re very recognizably part of this show I’ve loved for several seasons now — while also adding new shades to the characters, shades informed by their grief.

Which brings me back to the idea of the grief season being the apocalypse season. After all, when you’re grieving, doesn’t it feel like the end of the world? If you’ve lost someone you love, going outside and seeing people who aren’t wrecked by sadness can feel slightly surreal, as if everybody else is watching one show but somebody changed the channel on you. “Changing the channel” is The Magicians’ default state, so grounding that frenetic energy in a feeling as palpable as grief just heightens the show’s powers.

“We made a decision, a chance to be really truthful in a way that we knew would lose people. It upset us. But what we weren’t doing was bullshitting people about what life is. It’s fragile, and even the most charismatic, wonderful, vivacious people get sick and/or die,” said co-creator and executive producer John McNamara. “You can grieve, and see a great movie and laugh. The two are not mutually exclusive. They’re only mutually exclusive in bad movies and bad TV and bad plays. But life is so layered.”

Will this gambit to make The Magicians reflect the devastation some of its viewers feel help the show win those viewers back? It’s hard to say, but the early episodes of season five are an impressive example of a series sticking to its guns even as its fans threaten to abandon ship. In an age when showrunners increasingly seem scared of their audiences, The Magicians is daring its fans to bring their own sadness to its biggest apocalyptic story yet.

“The idea of stopping the apocalypse in itself comes into question,” Gamble said. “And [the characters] realize that they maybe have to do some destroying to create.”

The Magicians season five debuts Wednesday, January 15, at 10 pm Eastern on Syfy. The first four seasons are on Netflix.