After losing more than $1 billion, GM makes a deal with striking workers 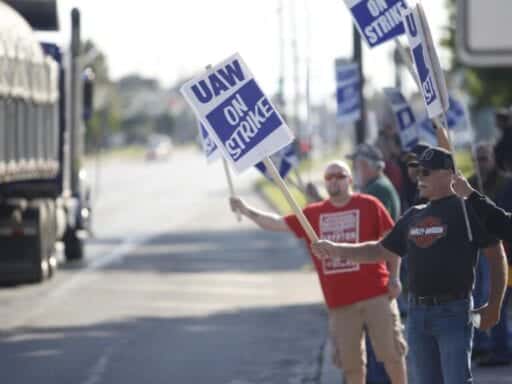 The longest auto workers’ strike in decades may soon be over.

It looks like the General Motors strike may soon come to an end.

GM executives and the United Auto Workers union have reached a tentative deal to get employees back to work after more than a month on strike, according to General Motors. The details of their new four-year contract have not yet been released.

Reuters reports that GM’s last offer included a 3 percent pay raise for two years of the four-year contract, and similar-sized bonuses for two years. They also hammered out a deal to make permanent temporary workers with three years on the job. It’s unclear whether the company made any compromise on the union’s demand to reopen a recently shuttered GM factory in Lordstown, Ohio.

The strike, which has paralyzed GM factories across the country, won’t end unless a majority of the 48,000 union members approve of the deal. So union leaders now need to persuade workers that they got the best possible contract. A vote will likely happen by the end of the week.

Both sides are under intense pressure to sign a deal. General Motors is losing $90 million a day, and thousands of auto workers are draining their savings, having been out of work since September 16.

The strike is hurting GM, and striking workers

The strike has had a huge effect on the company’s bottom line. It has essentially stopped production at more than 30 GM factories and slowed production for auto parts suppliers in the US and Mexico. That’s costing GM anywhere from $50 million to $100 million a day from lost factory production.

Thousands of non-union factory workers in Mexico and the US have been temporarily laid off as a result. Meanwhile, car dealers are struggling to get replacement parts to fix vehicles, forcing some customers to wait weeks for service.

These losses are climbing by the day, writes Cristina Benton, director of marketing and industry at Anderson Economic Group, a Michigan research firm specializing in the auto industry. She estimates that GM has lost more than $1 billion during the first four weeks of the strike, and the costs will keep going up as they impact more dealers and parts suppliers.

Workers are also getting hit. AEG calculates that workers at GM and its suppliers have lost $624 million in wages in the past month they’ve been on strike.

GM workers are getting a $275 weekly stipend from the union — hardly enough to pay all their bills. In Warren, Michigan, GM employees are collecting food, diapers, and baby formula to help striking workers get by.

Union leaders and company executives made little progress until now

When the GM strike entered its fourth week on October 7, company officials and union negotiators were still fighting about wages, retirement benefits, and the fate of an idled Chevy factory in Lordstown, Ohio. Nearly 50,000 striking workers spent their days picketing outside GM factories across the US.

While both sides had made some progress during the contract talks — union leaders said employee health insurance premiums won’t go up, and they’ve created a path for temporary factory workers to get permanent jobs — bargaining over pay and job security got so heated earlier this month that it spilled into the public.

“You didn’t even have a professional courtesy to explain why you could not accept or why you rejected our package proposal for each item we addressed,” Terry Dittes, director of the United Auto Workers union at GM, wrote in an October 6 email to company management, which he then posted online. “We expect the Company to respond and discuss the package proposal we presented yesterday. The law and basic decency require no less.”

A spokesperson for GM declined to comment last week on the dispute, but gave the following statement to Vox: “We continue to negotiate in good faith with very good proposals that benefit employees today and build a stronger future for all of us. We are committed to continuing discussions around the clock to reach a resolution.”

When negotiators returned to the bargaining table last week, one of the main unresolved issues involved how much to shorten the time it takes for a new worker at GM to reach full pay, according to the Wall Street Journal. Right now, new employees start out making about $17 an hour, and it takes eight years of gradual raises to reach the full $30 base pay. The two sides are also at odds over whether the company should increase contributions to workers’ retirement accounts.

It’s still unclear how these two issues were resolved.

But perhaps the most sensitive issue on the table involves the future of the Lordstown, Ohio, factory that once produced the Chevy Cruze.

During the recent negotiations, GM reportedly promised to build electric car batteries at a factory near the Lordstown plant, according to Bloomberg. (It’s also agreed to build an electric truck in the Detroit factory that the company planned to close in January.) The union wants more than just a battery factory in Ohio, because it would only employ a few hundred people at lower wages.

The UAW wants GM to build a new car in Lordstown, even if it means moving the assembly of the Chevrolet Equinox, Blazer, and GMC Terrain SUVs from a factory in Mexico. But with labor costs so much cheaper in Mexico, GM leadership has been unwilling to budge.

Laid-off workers in Ohio will be waiting to hear if anything changed in the final deal.

Auto workers elsewhere are paying attention, too. After all, the outcome of the negotiations has the potential to extend far beyond GM factories. The contract will lay the foundation for upcoming union talks with Ford and Fiat Chrysler. And what workers get from in the deal will reflect how much bargaining power US factory workers have in an era of globalization.

Trump sent Arizona a fraction of the ventilators it sought. Republicans still framed it as a big win...
If you are a unionized journalist, this labor ruling should worry you
Watch: Audience surprises Bret Baier with how much they like Bernie Sanders’s health care plan
Gordon Sondland, the ambassador at the center of the Trump impeachment inquiry, explained
Facebook took down a massive “Stop the Steal” group after its members called for violence
What we know about House Democrats’ formal impeachment inquiry