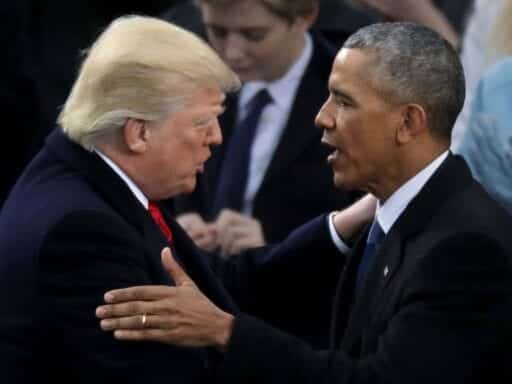 Trump pointed out Obama was president during the 2016 election, which is true.

Trump, who is spending the weekend at his Trump Turnberry golf course in Scotland ahead of his meeting with Russian President Vladimir Putin on Monday, fired off a series of tweets on Saturday morning before heading to play some golf. Among them: a reaction to Mueller’s Friday indictment of 12 Russians for crimes related to hacking and publicly releasing Democrats’ emails in 2016.

The president wrote that the “stories you heard” about the Russians “took place during the Obama Administration” and not his — a fairly obvious point. He asked why President Barack Obama didn’t act sooner and name-checked a pair of conspiracy theories about the Democratic National Committee’s server and the so-called “deep state,” both common themes for the president.

The stories you heard about the 12 Russians yesterday took place during the Obama Administration, not the Trump Administration. Why didn’t they do something about it, especially when it was reported that President Obama was informed by the FBI in September, before the Election?

Vox’s Andrew Prokop has a full explanation of Mueller’s Friday indictments, but here’s what they boil down to: The special counsel alleges Russian intelligence officers were behind hackings of the DNC, the Democratic Congressional Campaign Committee (DCCC), and Hillary Clinton campaign chairman John Podesta. They allegedly coordinated to release information they got in the hackings to sway the election, actions which the US intelligence community has said were meant to hurt Clinton and help Trump.

Though the crimes laid out in Friday’s indictment fall clearly within the scope of damaging Clinton, there are no allegations that anyone from the Trump campaign colluded with the 12 Russians to do so — a fact the White House pointed to in its official reaction.

The charges “include no allegations of knowing involvement by anyone on the campaign and no allegations that the alleged hacking affected the election result,” White House spokeswoman Lindsay Walters said in a statement Friday.

The FBI in July 2016 began investigating the Russian government’s meddling in the US election. The following month, the CIA informed Obama there was evidence that Putin was directly involved in the attacks. He asked his team, including Homeland Security Secretary Jeh Johnson and CIA Director John Brennan, to look into the matter, and multiple other members of the administration were pulled in.

What Obama did not do was make a splashy announcement that Russia was trying to interfere, apparently, to swing the election to Trump.

Democratic and Republican leaders with knowledge of Russia’s activities squabbled over whether and how to inform the public. The Washington Post last year laid out the struggle, with Democrats pushing for Obama to go public with what was happening and Republicans pushing against it. According to Post, Senate Majority Leader Mitch McConnell (R-KY) “voiced skepticism” of the intelligence community’s evidence.

Former Vice President Joe Biden said early this year at an event hosted by the Council on Foreign Relations that McConnell refused to sign a bipartisan statement condemning Russia’s activities in 2016, and the Obama administration worried that without a bipartisan front, it would look like they were trying to influence the election.

“Can you imagine if the president called a press conference in October, with this fella, [Trump campaign CEO Steve] Bannon, and company, and said, ‘Tell you what: Russians are trying to interfere in our elections and we have to do something about it,’” Biden said, according to Politico. “What do you think would have happened? Would things have gotten better, or would it further look like we were trying to delegitimize the electoral process, because of our opponent?”

In October 2016, the Obama administration formally accused the Russian government of hacking the DNC, but it came just a half hour before the now-infamous Access Hollywood tape leaked.

Donald Trump seems fine with Nazis gathering on his lawn
A very early 2020 poll shows Democrats like Biden to take on Trump
Michael Cohen now wants to get out the vote
The first openly transgender gubernatorial nominee from a major party is getting death threats
Mitt Romney just did something that literally no senator has ever done before
Money Talks: The couple navigating child care in the pandemic