After Obama, Democrats need a new theory of change. Pete Buttigieg thinks he’s got it. 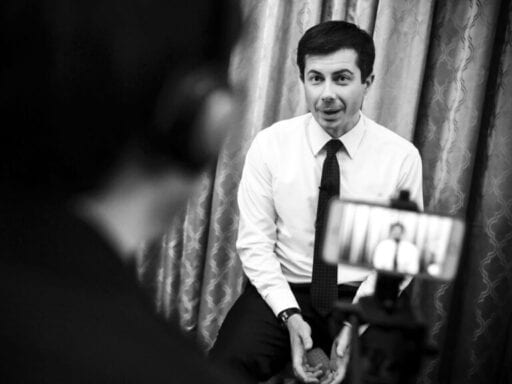 The most important debate in the Democratic primary is over how to make governing great again.

This piece was first published in April 2019 and has been lightly updated.

When I first wrote this piece in spring 2019, Pete Buttigieg was just catching fire as a presidential candidate.

So I decided to sit down with Buttigieg for my podcast, The Ezra Klein Show, and came away unexpectedly impressed. At the time, a lot had been made about Buttigieg’s résumé, but what struck me most was his coherent theory of what has gone wrong in American politics, and what’s required to fix it.

While Buttigieg’s rhetoric has shifted a bit on these topics in the months since, I think this interview is still an important one for understanding Buttigieg’s appeal — and the warring theories of change at the heart of the 2020 Democratic primary.

In 2007, Mark Schmitt wrote a piece I think about often. In it, he argued that the contest between Barack Obama, Hillary Clinton, and John Edwards was “not a primary about ideological differences, or electability, but rather one about a difference in candidates’ implicit assumptions about the current circumstance and how the levers of power can be used to get the country back on track.” It was, he said, the “theory of change primary.”

Obama won that primary, and in the short period in which Democrats had 60 votes in the Senate, he managed to push through quite a bit of legislation. But while Democrats broadly revere Obama, there’s a consensus that his theory of change ultimately crashed on the shoals of Republican obstruction. As a result, many of the problems Obama sought and failed to address — from inequality to climate change to wage stagnation to money in politics to gerrymandering — have worsened, and Democrats see President Trump as the poisoned fruit of those failures.

The central lesson of Obama’s presidency, Buttigieg argues, is that “any decisions that are based on an assumption of good faith by Republicans in the Senate will be defeated.” The hope that you can pass laws through bipartisan compromise is dead. And that means governance is consistently, reliably failing to solve people’s problems, which is in turn radicalizing them against government itself.

Buttigieg’s response — one you also hear from 2020 hopeful Sen. Elizabeth Warren and former candidate Gov. Jay Inslee — is to restructure government so that popular majorities translate more cleanly into governing majorities. He’s discussed eliminating the Electoral College, scrapping the filibuster, and remaking the Supreme Court so each party nominates the same number of justices and vacancies become less “apocalyptic.”

There’s nothing new about a Democratic candidate promising to fix the system. Obama ran on similar themes in 2008. House Democrats opened their session by passing a sweeping package of good-government reforms. But once Democrats take power, concrete policy change, with the immediate benefits it promises, tends to win out over the abstractions of procedural reform. It’s easier to run for reelection bragging about a tax cut than about weakening the Electoral College.

Obama’s presidency, in this respect, was typical. Once he was elected — and understandably, given the economic free fall — fixing the system took a back seat to moving legislation through the system. Obama stabilized the financial sector and expanded health insurance to tens of millions of people, but he left the corrupting influence money has in our politics untouched.

Democrats need to debate their theories of change

So far, the 2020 Democratic primary has been fought through ambitious policy promises, primarily, though not exclusively, around health care. Sens. Bernie Sanders and Kamala Harris (who ended her campaign in December) believe in creating a universal Medicare program and abolishing private insurance. Sen. Cory Booker and former Texas Rep. Beto O’Rourke (who’ve both also exited the race) believe in creating a universally accessible Medicare program and keeping private insurance.

These differences seem vast, and ideologically, they are. But what do they amount to when translated into practical politics? Democrats aren’t going to have 60 votes in the Senate, and you can’t abolish private insurance with 51 votes, or even pass Medicare for America that way.

The key question here isn’t what the president believes, but how the Senate works. If Democrats don’t remove the filibuster, their only chance to pass major legislation is the filibuster-proof budget reconciliation process. The main constraint on reconciliation is that each provision has to be primarily budgetary in nature, and reforming the health care system on that scale requires a vast quantity of regulatory changes. No one really knows what the Senate parliamentarian will and won’t allow, but experts I’ve spoken to believe both bills would be disqualified dozens of times over.

“My sense has been that provisions that look like regulations — such as lowering the age to 55 for buying into Medicare — tend to be viewed as such by the parliamentarian, meaning that they would require 60 votes,” says political scientist Sarah Binder, an expert in congressional procedure.

The challenge the filibuster poses to the progressive agenda — or really any agenda — is just one way the differences between the candidates’ theories of political change matter as much as, or more than, the differences in their policies. But the candidates rarely debate these questions openly, in part because we have almost no vocabulary for describing that dimension of politics.

The words we use to describe the ideologies of presidential candidates are imperfect, but at least they exist. There are liberals, neoliberals, democratic socialists, leftists, conservatives, neoconservatives, centrists, paleoconservatives, libertarians, and New Democrats, to name just a few. The boundaries among these groups can be fuzzy, but overall, it’s a pretty flexible vocabulary for describing what this or that politician believes.

There’s no similarly accepted shorthand for the difference between candidates like Warren and Buttigieg, who envision sweeping reforms to the way laws are made, and people like former Vice President Joe Biden and Sen. Amy Klobuchar, who emphasize that their relationships with Republicans better equip them to maximize change in the system we have. Nor are their categories clearly describing the approaches the candidates intend to take toward electing allies or mobilizing public opinion, or much discussion of whether they’d prioritize expanding the earned income tax credit over curbing money in politics.

Too often, we assume policy ambition corresponds with political style, but that shortcut often misleads us. Sanders, for instance, has proposed raising tens of trillions in taxes to build a European-style welfare state in America. But asked whether he’d eliminate the filibuster, he pronounced himself “not crazy” about the idea. And he’s not alone. Sens. Kirsten Gillibrand, Booker, and Klobuchar have offered outright defenses of the filibuster, and Harris has dodged the question. As far as I can tell, the only senator running for president who seems to be seriously considering eliminating the rule is Warren.

By contrast, among others running for president, the filibuster isn’t nearly as revered. Along with Buttigieg, Inslee and O’Rourke have both discussed scrapping the practice (as, it should be noted, has President Trump).

Similarly, Republicans leveraged their obstruction of the nomination of Merrick Garland to the Supreme Court and the advantage they hold in the Electoral College to maintain generational control of the Court. There’s been some talk in Democratic circles about restructuring the Court in response. Buttigieg has embraced an interesting idea (first proposed in this Vox article by Daniel Epps and Ganesh Sitaraman) by which Democrats and Republicans would get to name five justices each, and then those justices would jointly name another five members to the Court. Harris, Warren, Gillibrand, and Inslee have been open to the idea of adding justices, though they’ve shied away from offering specific plans.

But Sanders has thrown cold water on such proposals. “My worry is that the next time the Republicans are in power, they’ll do the same thing,” he said. That’s a reasonable view — arguably it’s the most reasonable view — but conservative control of the Supreme Court endangers Sanders’s broader agenda. What’s his plan for that?

Democrats who want to reform the political system have a long list of policies to choose from. Granting statehood and political representation to the District of Columbia and Puerto Rico makes moral sense, and could well tip the balance of power in the Senate, where Democrats currently operate at a large geographic disadvantage. Eliminating the Electoral College commands virtually unanimous support in the field, though no one has a viable plan for how to do it. Campaign finance reform is both popular and long overdue. The Washington Post has a useful overview of where the various candidates stand on some of these issues.

But these ideas require the power to implement them, and Democrats currently lack even that. What are the candidates’ theories of party building, such that they’re likelier to have the congressional allies necessary to make these kinds of changes? How would they approach governing if Republicans hold the Senate, as is the likeliest 2020 outcome?

We are better at discussing what candidates want to do than how they will do it. That hole in our political vocabulary matters, as it makes it hard to debate the core question of any political campaign: How will the candidates actually make real people’s lives better?

Toward the end of our conversation, I asked Buttigieg for his vision of America’s national identity. “The only semi-convincing justification for American exceptionalism,” he replied, “is this idea that America represents a way of governing, a way of doing things, that makes us all better off.”

It wasn’t the answer I expected, but it frames the challenge for Buttigieg, and the rest of the Democrats, well: How does the party that believes in government make governing great again?

Subscribe to The Ezra Klein Show on Apple Podcasts, Spotify, Stitcher, or wherever you get your podcasts.