After Pittsburgh, the interfaith response sends message of solidarity across the religious divide 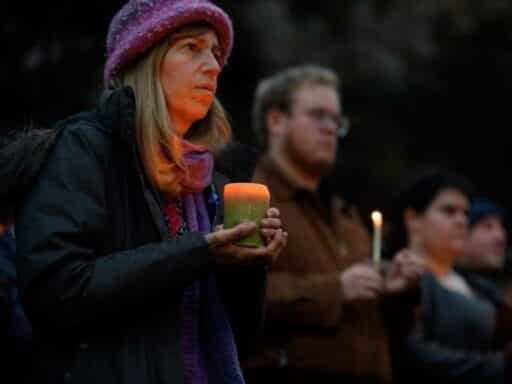 Members of other faiths have rallied behind their “Jewish neighbors” after a gunman killed 11 people at the Tree of Life synagogue Saturday.

Thousands gathered for an interfaith prayer vigil at Pittsburgh’s Sixth Presbyterian Church in the hours following the mass shooting at the city’s Tree of Life synagogue, packing the pews with mourners from different congregations across the community.

Reverend Vincent Kolb, a pastor at Sixth Presbyterian, began the service by recalling the advice of the church’s former worshipper Fred “Mister” Rogers and said “it is in that spirit of neighborliness that we gather here tonight to be allies to our Jewish neighbors who have been victimized and traumatized by this tragedy,” the Pittsburgh Post-Gazette’s Marylynne Pitz and Peter Smith reported.

Interfaith voices have been some of the loudest expressing solidarity for the victims of the shooting that left 11 dead on Saturday — the worst attack on worshipping Jews in American history according to the director of the American Jewish Archives. In addition to the vigil held at Sixth Presbyterian, interfaith services are being held across the country in the coming days.

Hundreds of people (so many that people were sitting on the floor at the front of the church) attended an interfaith vigil at Sixth Presbyterian Church in Squirrel Hill. After a brief service, the vigil moved outside to accommodate a larger crowd. (Alexandra Wimley/Post-Gazette) pic.twitter.com/M9bUxsschn

You’re going to want to turn the sound on for this one: hundreds sing during an interfaith vigil at Sixth Presbyterian Church in Squirrel Hill. @PGVisuals pic.twitter.com/qqaAGWsHgO

The official interfaith community vigil, organized by the Jewish Federation of Greater Pittsburgh, will take place this evening.

Prominent members of Jewish, Christian and Muslim communities have also taken to social media to express support for Pittsburgh.

My inbox is full of expressions of sympathy from Muslim friends and acquaintances for which I express my deepest gratitude. #PittsburghShooting

“I love you when you bow in your mosque, kneel in your temple, pray in your church. For you and I are sons of one religion, and it is the spirit.”
― Khalil Gibran #TreeofLifeSynagogue #solidarity #interfaith #poetry

Solidarity and support have overwhelmingly been the main messages coming from members of other faiths and those at at the vigil — but not the only ones. Towards the end of the vigil at Sixth Presbyterian, which moved to the streets of Squirrel Hill, chants of “vote, vote, vote” echoed through the crowd.

from the vigil in squirrel hill tonight. please vote on nov 6th. pic.twitter.com/bkSpgCS6bU

The Muslim-American community has rallied behind the synagogue

Saturday at the Sixth Presbyterian vigil, Wasi Mohamed, executive director of the Islamic Center of Pittsburgh, also spoke, asking the mourners who among them were angry, and as hands shot up he asked, “How could we not be? People were stolen from us.” But, he said, the salve for that anger will be doing good in the community, and shared a Quranic verse calling for people to perform better deeds in response to bad ones.

The Muslim-American community was already listening: On social media, the hashtag #Muslims4Pittsburgh circulated with a crowdfunding campaign for the Tree of Life victims and their families. Organized by MPower Change and CelebrateMercy, Muslim organizations dedicated to education and social justice, the campaign reached its first $25,000 goal in six hours.

“The Muslim-American community extends its hands to help the shooting victims, whether it is the injured victims or the Jewish families who have lost loved ones,” reads the page for the fundraising campaign, Muslims Unite for Pittsburgh Synagogue. “We wish to respond to evil with good, as our faith instructs us, and send a powerful message of compassion through action.”

The campaign has raised over $46,000 from more than a thousand backers since yesterday and is now aiming to hit $50,000. The website says the Islamic Center of Pittsburgh will work directly with Tree of Life to distribute funds to families.

How the Venus de Milo got so famous
The White House says USPS isn’t removing mail-sorting machines. Postal workers say it is.
How Thomas Middleditch and Ben Schwartz found themselves making 3 Netflix improv specials at once
The absurd 24 hours unleashed by one bad White House answer on Russia
Early voting in 2020 has already exceeded all of 2016’s early votes
75 Catholic priests and scholars ask Francis to backtrack on death penalty