After the Harith Augustus shooting, Chicago’s policing problems are back in the spotlight 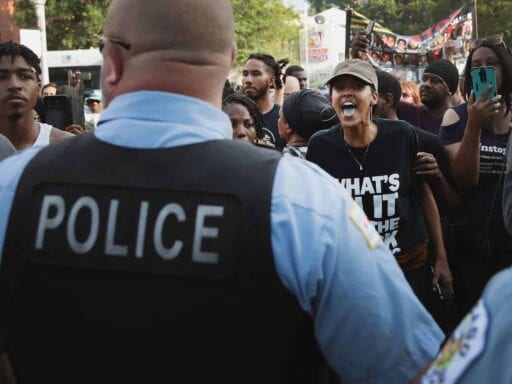 The recent fatal shooting of a black man by a Chicago police officer has sparked an intense community reaction, prompting the police department to swiftly release body camera footage in an effort to defuse tensions.

On Saturday, Harith “Snoop” Augustus, a 37-year-old barber in the city’s South Shore neighborhood, was shot by police as he ran into a street. A spokesperson for the police department said Augustus was “exhibiting characteristics of an armed person” and had been approached by police when the interaction escalated and the shooting occurred.

After protests broke out on Saturday in reaction to Augustus’s death, the department released a short video of the shooting on Sunday, taken from an officer’s body camera. The video shows Augustus initially speaking with an officer. As more officers arrive, and begin to grab at the man’s wrists, Augustus pulls away from them, and at least one officer opens fire as Augustus’s hand moves towards his waist.

The video does confirm that Augustus was armed, but does not fully show the moments before or after the shooting. During a Sunday news conference, police superintendent Eddie Johnson noted that Augustus did not have a concealed carry permit, although news reports have noted that he was licensed to own a firearm.

The quick release of the video was a response to a night of chaotic protests on Saturday, as protesters disputed officers’ initial claims that Augustus was armed. Things grew tense, with some protesters throwing bottles and rocks at officers as police fought back with batons. On Sunday, a department spokesperson said the video was released to counter “inaccurate” information.

“If we don’t get in front of things, the narrative will spin out of control,” Johnson said at the press conference.

But it is unlikely that the video’s release will actually accomplish that. The shooting of Harith Augustus comes at a volatile time for Chicago Police Department, which has been under years of intense scrutiny for its strained relationship with black neighborhoods, fueled by repeated incidents of both lethal and nonlethal police violence including several high-profile police shootings of black men and women.

And while the videos released on Sunday show that Augustus was armed at the time of the shooting, the mere presence of a weapon isn’t likely to quell critics who argue that the department’s problems go much deeper than this incident.

There are still many questions about the Augustus shooting

The Chicago Police Department released two videos of the shooting on Sunday. The first shows events as they occurred in real time. The second video, which was edited by the department, shows things in slow motion and also includes a freeze frame shot of Augustus’s holstered weapon.

In both videos, Augustus is seen speaking with an officer shortly before three more officers arrive. None of the videos contain audio, the department said, because body cameras do not record sound for a brief period after being switched on.

After they approach, two of the officers reach for Augustus’s wrists. Augustus pulls away and is shot shortly after running into the street. While an autopsy has confirmed that the man was hit multiple times, few other details have been released.

“These things happen at a split-second and officers have to make decisions quickly,” Johnson said on Sunday when defending the officers. “They don’t have the luxury of looking at video later.”

Hours after the shooting, the South Shore neighborhood where it occurred was rocked by protests, with community members chanting, “Who do you protect? Who do you serve?” at officers. Four arrests were made Saturday, and at least one person faces charges.

The officers involved in the incident have been placed on administrative duty for 30 days, in accordance with department policy. On Sunday, Johnson said that an investigation of the incident was ongoing.

Augustus is the latest victim of several officer-involved shootings in Chicago. In June, officers fatally shot Maurice Granton, an armed man fleeing from officers. In 2016, an unarmed teen named Paul O’Neal was shot in the back as he fled from officers. In December 2015, police made national headlines after shooting both Quintonio LeGrier, a black teen holding a baseball bat, and Bettie Jones, a 55-year-old grandmother who was the LeGrier family’s neighbor.

Shortly before that shooting, the police department was forced to release footage of the 2014 shooting of Laquan McDonald, a teenager shot 16 times by a white police officer, prompting a wave of reforms as well as intensified scrutiny of how the department uses force.

In 2017, a report from the Justice Department found that the Chicago Police Department’s use of force violated the Fourth Amendment, noting “numerous incidents where CPD officers chased and shot fleeing persons who posed no immediate threat to officers or the public.” The report noted that the department’s non-lethal encounters were also prone to excessive force, and added that the department suffered from “severely deficient training procedures and accountability systems.”

These incidents can be costly for taxpayers forced not only to deal with police violence, but pay for it: Chicago borrowed some $709 million from 2010 to 2017 to cover the cost of settlements according to a new report from the Action Center on Race & the Economy. An investigation from the Chicago Reporter noted that the city of Chicago has paid out more than half a billion dollars to settle misconduct lawsuits since 2005.

But police misconduct in the city goes beyond the string of recent incidents. As Osita Nwanevu notes at Slate, Chicago has fully implemented just 20 of the 99 reform recommendations made in the 2017 DOJ report. And while President Trump has frequently discussed violence in Chicago, at one point even suggesting federal intervention, the administration has also moved away from Obama-era police reforms aimed at increasing federal oversight of police departments.

Trump is taking credit for the decades-old decline in cancer deaths
Why John Roberts won’t save the impeachment trial from partisanship
Trump’s tall tale about the military being out of ammunition shows how his lies evolve
Why Elsa from Frozen is a queer icon — and why Disney won’t embrace that idea
Will the government shutdown again before the midterms? Ask Trump.
How a conspiracy theory about the Bosnian genocide infiltrated the Nobel committee