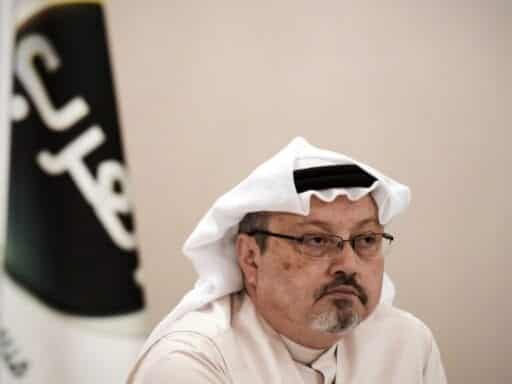 This is a big test for President Donald Trump.

The government of Saudi Arabia has officially announced that Jamal Khashoggi, the dissident journalist who disappeared two weeks ago, was killed inside the Saudi consulate in Istanbul at the hands of Saudi government officials.

According to an initial Saudi-led investigation, Khashoggi died inside the consulate after a conversation “did not proceed in the desired manner,” the Saudi Foreign Ministry said on Friday night. There was “a fistfight that led to his death,” added Riyadh’s public prosecutor in a statement. It seems Khashoggi ultimately died from a chokehold.

Eighteen Saudis have been arrested in connection to the case, Saudi state-run television announced. They include a top intelligence official, Maj. Gen. Ahmed al-Assiri; Saud al-Qahtani, a close aide to Crown Prince Mohammed bin Salman, whom US intelligence says likely knew about what happened to Khashoggi; and a total of four generals involved in foreign intelligence.

Thus ends at least part of the mystery of what happened to the Washington Post columnist. But many questions remain, including what happened to Khashoggi’s body, whether the Saudi officials responsible were sent to Istanbul by Crown Prince Mohammed himself, and why one of those officials just so happened to be an autopsy expert.

The kingdom has set up a commission to investigate what happened, state-run television said, and will release a report in a month. A Saudi team is soon headed to Turkey to “clarify the truth,” the Saudi Press Agency reported.

However, given that the Saudi government has blatantly lied to the public for two weeks — maintaining that Khashoggi had merely left the consulate on his own through a back entrance — it’s unlikely the report will reveal the full truth about exactly what happened.

How will Trump respond?

US officials from across the political spectrum have already started to push back on the Saudi announcement.

“To say that I am skeptical of the new Saudi narrative about Mr. Khashoggi is an understatement,” Sen. Lindsey Graham (R-SC), a top ally of President Donald Trump, tweeted on Friday night.

“Where is the body?” asked Rep. Eric Swalwell (D-CA), a top member of the House Intelligence Committee, on Twitter. “#Khashoggi’s family deserve immediate custody of the remains as they seek some measure of closure.”

The White House did make an official statement on Friday night, saying it was “saddened” by the Saudi admission.

But the only reaction that matters is Trump’s alone. The problem is that he’s changed his stance on this issue over the past week.

Trump has repeatedly said he doesn’t want to take any actions that could imperil a litany of arms sales to Riyadh that could total $110 billion. What’s more, Trump has noted that Khashoggi was a US resident, but not a citizen, suggesting that his death doesn’t merit a stern response from America. On Monday, he insinuated that “rogue killers” were behind the journalist’s disappearance.

But three days later, he told reporters that it “certainly looks” like Khashoggi is dead, and vowed “severe” consequences if Saudi royals were behind the possible killing.

It’s currently unclear if any members of the vast Saudi royal family are among the 18 individuals arrested in the case, so it remains to be seen whether the US will respond with any kind of punishment. And since the news came on a Friday night in America, it’s unlikely there will be much initial pressure on the president to do anything.

Trump told reporters late Friday that he finds the Saudi explanation credible, adding that “Saudi Arabia has been a great ally, but what happened is unacceptable.” But he said he wanted to speak to the crown prince directly before making any moves.

However, Trump indicated that if he did choose to punish Saudi Arabia for its actions, he would prefer “some form of sanction” rather than canceling the $110 billion arms deal with the repressive country.

The president previously expressed the same sentiment last week, telling reporters in the Oval Office, “I don’t like stopping massive amounts of money that’s being poured into our country.”

Republicans now like the FBI less than they like the EPA
How to watch Trump and Biden’s dueling town halls on Thursday
Tomi Lahren now has an athleisure line
Want to be in our new YouTube show? Send us a question.
The Senate just voted to let the government keep surveilling your online life without a warrant
Celebrities have been targets of a rash of burglaries. The new bling ring, explained.