After weeks of protest, Puerto Rico has a new leader — for now 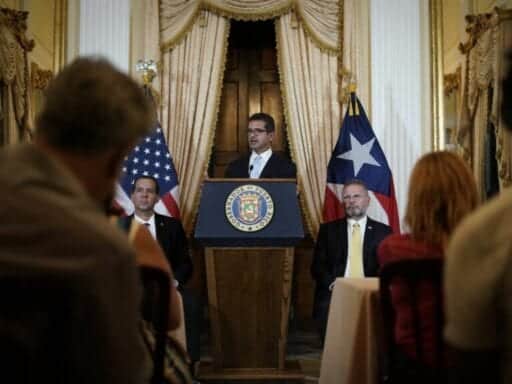 Pedro Pierluisi is Puerto Rico’s new governor. But he faces legal challenges and protesters who want him gone.

After weeks of protests forced out Puerto Rico’s governor of two years, a replacement was sworn in Friday. But his tenure many be short. Critics say the process by which his swearing in occurred is unconstitutional, and protesters have already taken to the streets calling for him to step down.

Puerto Rico’s constitution states the territory’s secretary of state is to become governor should a sitting governor resign. However, the island lacked a secretary of state until Friday after Luis Rivera Marín, who had served in the role, stepped down.

Puerto Rico’s justice secretary, Wanda Vázquez Garced, was next in line to be governor; she, however, has said publicly that she does not want the job. To ensure someone was in the governor’s chair when he left, outgoing Gov. Ricardo Rosselló appointed lawyer Pedro Pierluisi as secretary of state, and Pierluisi was confirmed in that position by Puerto Rico’s House of Representatives Friday.

Shortly after, Pierluisi took the oath of office, replacing Rosselló, who resigned after leaked text messages revealed he and other top officials (including former secretary of state Marín) routinely denigrated their own constituents, including victims of Hurricane Maria.

But the uncertainty that has roiled Puerto Rico is not over.

Pierluisi took office of secretary of state without Senate confirmation. The Senate will hold a public confirmation hearing on Monday, and vote on his governorship on Wednesday. Should Pierluisi fail to be confirmed — and he may, as it is unclear whether he has the majority of that chamber behind him — he would be unable to serve as governor despite already having been sworn in.

Pierluisi’s ascension to the governor’s chair has already been criticized by the most powerful member of the upper chamber, Senate President Thomas Rivera Schatz, who called Pierluisi’s entrance into office “unethical and illegal.”

In the meantime, this lack of Senate approval may render Pierluisi’s inauguration unconstitutional. Legal challenges to the decision to swear in Pierluisi are expected; San Juan Mayor Carmen Yulín Cruz, one of the faces of the Popular Democratic Party that opposes Rosselló and Pierluisi’s New Progressive Party, tweeted she plans to file a lawsuit challenging the constitutionality of Pierluisi’s ascension as soon as the courts open on Monday morning.

In an effort to appease his critics, the new governor has pledged not to make any major decisions until he is confirmed by the Senate, and has promised to step down on Wednesday should the confirmation vote fail.

Protests against Pierluisi have already begun

If the Senate or the courts do not cut short Pierluisi’s first term, popular outrage just might. Many of the protesters who have been in the streets for weeks are unhappy with their new governor. They cite his ties to Washington and the unpopular board overseeing Puerto Rico’s federal bankruptcy proceedings as reasons to be wary of him. That board has, in recent years, cut funding to pensions and public services. Pierluisi has also been accused of corruption.

A massive uprising took hold of Puerto Rico following the July 13 revelation by Puerto Rico’s Center for Investigative Journalism of 900 pages worth of text messages between Rosselló and his advisors and cabinet members. The messages included misogynistic and homophobic remarks, and also jokes about those who died during Hurricane Maria. In the protests that followed, many made explicit they were fed up with overall corruption, but were also incensed over how Rosselló’s administration had handled the aftermath of that deadly natural disaster.

For many in the protest movement — the largest that the US territory has ever seen — Pierluisi is seen as of-a-kind with his predecessor, a representative of the same corrupt and contemptuous politics they thought they had just ousted.

In his inaugural speech, Pierluisi said that he would wait to move into the governor’s mansion until after the final Senate vote next week. He also said that, if he is not approved by the Senate, the position would move to the next person in line. According to the rules of succession, that would be Justice Secretary Wanda Vázquez — who has said she doesn’t want the job, and who is likewise unpopular among the protestors. When it appeared she might take the island’s top job ahead of the appointment of Perluisi, protesters began spreading #WandaRenuncia, echoing the #RickyRenuncia that was used in coordinating Rosselló’s ouster.

As Vox’s Alexia Fernández Campbell has reported, Pierluisi faces allegations that he took part in the sort of politics the protesters are staunchly against: using public office only for personal enrichment. Pierluisi, who has previously served as Puerto Rico’s attorney general and its non-voting delegate to the US House of Representatives, is also accused of having introduced legislation that would have benefitted the Wall Street companies at which his wife worked as a consultant.

His ties to mainland corridors of power are also cause for concern among protesters who have been living under austerity measures and a massive debt crisis for years:

[Pierluisi]’s spent the last few years working for a Washington, DC, law firm that provides legal counsel to the federal oversight board monitoring Puerto Rico’s bankruptcy. Many Puerto Ricans hate the oversight board, which has inflicted severe austerity measures on the island. Pierluisi has stepped down from that job, but Puerto Ricans are suspicious that he will still support the board’s demands to slash pensions and pay for teachers and other public-sector workers.

In the hours surrounding Pierluisi’s inauspicious entrée into the governorship, protesters in the streets of San Juan waved Puerto Rican flags and chanted “No lo queremos” (We don’t want him) and “Vamos por Pierluisi” (We’re coming for Pierluisi):

Protest chants in Puerto Rico have an extremely quick turnaround.

The protesters remained outside the governor’s mansion into the night, according to the AP’s Dánica Coto:

Several hundred protesters remained outside the governor’s mansion after Pedro Pierluisi was sworn in: “Arriba! Abajo! Corruptos p’al carajo!”
The protest was calm, but police warned several times that they would throw tear gas if necessary. pic.twitter.com/PnOKXhsr91

In recent years, facing the ongoing fallout from a recession that began in 2007, Puerto Ricans have protested against their government’s handling of the island’s finances. In 2013, for example, public school teachers occupied the Capitol building, following recession-related cuts to their pensions.

But no protest ever approached the size, scale, and energy of the two-week-long movement that forced out Rosselló.

As Fernández Campbell wrote, both main political parties are seen as responsible for the island’s financial woes and as being riddled with corruption. Now these protesters want more than a change within the governor’s mansion — they are calling for systemic reform. And they don’t see systematic change as possible with the leading candidates for governor should Perluisi step aside: Senate President Thomas Rivera Schatz and Justice Secretary Wanda Vázquez. As Fernández Campbell reported:

Another person jockeying for Rosselló’s seat is Puerto Rican Senate majority leader Thomas Rivera Schatz. But Rosselló discarded that idea after news surfaced that Schatz had reportedly steered government contracts to his relatives’ businesses. The editorial board of El Nuevo Día, the largest newspaper in Puerto Rico, has accused him of holding up the vote to confirm Pierluisi because he wants the job himself.

Then there’s Justice Secretary Wanda Vázquez, who is next in the line of succession if Congress doesn’t fill the secretary of state role. She has baggage, too. Vázquez angered the public for reportedly refusing to investigate the reason why tons of hurricane supplies were abandoned in fields and never distributed to survivors. She also ignored public demands to investigate a recent spike in violence against women. So protestors have threatened to drive her out of office the same way they drove out Rosselló.

The contested transfer of power occurred on the same day that the Trump administration announced it would delay funding to the island territory for future disaster preparedness. Hurricane Maria, which made landfall in September, 2017, was the worst natural disaster to ever befall the island territory. The official death count is 2,975 — though many believe it to be much higher than that — and many residents went without power for up to a year after the storm riddled the island’s infrastructure.

On Friday, Ben Carson, secretary of Housing and Urban Development — which oversees disaster preparedness funding — named “alleged corruption, fiscal irregularities and financial mismanagement occurring in Puerto Rico” as a reason for delaying the distribution of nearly $9 billion. He also said that stricter oversight, including a federal monitor, would be instated, in order to “ensure recovery funds get to the people who need them most and protect taxpayers who are footing the bill.”

In a call with reporters, housing officials declined to specify how Puerto Rico would be able to apply for the funds. But they cited the recent turmoil on the island, including the potential constitutional crisis over the transfer of powers, as one reason for their delay.

“We’re particularly concerned about the controls Puerto Rico had in place. Recent events have increased that risk even more,” a HUD official said. “We want to make sure we’re pumping the brakes and being prudent.”

And as Vox’s Zeeshan Aleem has explained, Puerto Rico still has yet to receive all the the federal funds promised to it to help with Hurricane Maria repairs: “Puerto Rico has only gotten about $14 billion so far — the rest of the $42.5 in approved funding is still stuck in Washington, caught up in the tedious legislative process for approving funds.”

Worries about corruption and the lack of a leader have also held up a request for more federal dollars to use on health care. Congress has yet to finish its debate on whether to grant that request, but lawmakers on both sides of the aisle have argued if it is granted, there need to be new accountability measures created to ensure it is used properly.

While the debate drags on, those in need of the health care and hurricane recovery funds continue to be forced to go without, and Puerto Rico will, for now at least, have to weather the 2019 hurricane season lacking HUD’s disaster preparedness aid.