Aircraft fuel is notoriously dirty. This airline is betting on clean electricity. 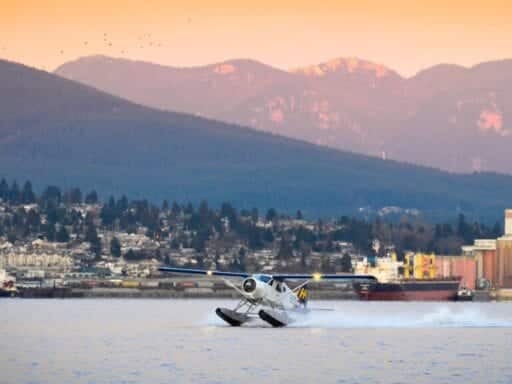 Harbour Air, a small Vancouver-based airline, made history this month with the world’s first all-electric flight of a commercial aircraft.

The six-passenger DHC-2 de Havilland Beaver seaplane modified to run on a 750-horsepower electric motor took off and landed on the Fraser River for a four-minute flight. And it couldn’t have come at a better time: the climate emergency is only growing worse.

Watch LIVE as @HarbourAirLtd #ePlane takes flight, magnified by the magni500 electric propulsion system. Join our live stream for this historic event as the first all-electric commercial aircraft ushers in a new era of aviation. https://t.co/8lkydg9JX7

In the US, transportation is now the largest source of greenhouse gas emissions, and aircraft account for 12 percent of transportation emissions. US air travel reached a record high last year, pushing up overall emissions even while the power sector saw a decline.

To make matters worse, demand for flights is growing. Emissions from air travel are poised to spike up to sevenfold globally by 2050 if nothing else changes.

That’s why it’s so urgent to decarbonize air travel. Yet the technical challenges are immense. Alternatives like carbon-neutral biofuels remain far too costly. And the stodgy rules in the heavily regulated, risk-averse aviation sector lag far behind advances in electric drivetrains.

Harbour Air’s short test flight using zero-emissions propulsion is therefore pretty exciting. In March, the company announced that it’s betting big on electric aviation, aiming to zero out all of its emissions with electric airplanes. They think they have a formula that works. Here’s why.

Harbour Air is the perfect candidate for electrification

I’ve written before about the technical challenge and promise of electric aviation. But Harbour Air presents an interesting case study for how electric flight can make business sense as well.

Harbour Air flies a fleet of more than 40 propeller-driven seaplanes that take off and land on water. It flies 500,000 passengers per year to 12 destinations in the Pacific Northwest.

And it turns out that the current generation of battery and electric motor technology — developed for cars and industry — fits almost perfectly within the Harbour Air’s existing operations.

“We are in this rather unique position of having short stage lengths and single-engine aircraft that require a lot less energy,” than larger planes, said Harbour Air CEO Greg McDougall. “We started doing some math and working with some engineers and figured out that it was actually entirely doable with the technology that exists today, although with a limited range and limited payload.”

Weight is a critical constraint in small aircraft, where almost every pound has to be tabulated in flight plans. This drastically limits how far and how fast an aircraft can go.

But all of Harbour Air’s routes are less than 30 minutes, so there’s plenty of juice in the current and upcoming generation of batteries to meet the demand for these routes, and the planes don’t have to be quick.

Another consideration is that fuel is often the largest single expense for most airlines. Its price is volatile and spikes can hit small airlines especially hard. Electricity prices, on the other hand, are far more stable.

McDougall says he expects electrification to save money for the company. “It’s just way cheaper to run electrified propulsion systems in aircraft in the long-run as the technology evolves,” he said. That’s because electric motors are simpler and easier to maintain than the company’s existing piston engines, which require millions of dollars in maintenance every year, he said. A piston motor drivetrain ranges in cost between $300 and $450 per operating hour. The electric drivetrain is projected to cost $12 per hour.

Lower operating costs coupled with improving range and performance would eventually lead to lower ticket prices, according to McDougall.

Electrification is also on-brand for Harbour Air. The company has been carbon neutral since 2007. McDougall said many of the airline’s customers are tourists and vacationers who want to experience snow-capped mountains, forests, and clear, pristine waters. A quieter, cleaner aircraft becomes another selling point, one that customers might even pay extra for.

But all the factors that make Harbour Air an ideal candidate for electrification are also why few companies can follow in their footsteps. About 5 percent of global commercial flights are shorter than 100 miles, but Harbour Air flies them exclusively. It’s much easier to change the logistics around propulsion in a small regional carrier than in a global airline that’s constantly competing on cost. And no electric propulsion system right now can get dozens of passengers in an airliner off the ground. For now.

Harbour Air is sharing the costs of their foray into electrification with magniX, an electric powertrain company founded in Australia.

Roei Ganzarski, CEO of magniX, told Vox his company is developing electric motors with a high power-weight ratio, a trait especially suited to aircraft. They began looking for a partner a year ago that would be interested in flights with a 100-mile range and found Harbour Air.

He noted that while battery capacity remains the biggest challenge, magniX is concentrating on vaulting some of the other hurdles in electrifying aircraft. One issue is that electric motors generate a lot of heat, but there isn’t enough air for cooling them at the current flight speeds of aircraft. Adding a liquid cooling system would add weight and defeat the purpose of a light and powerful motor, so magniX has developed a proprietary cooling system.

Another concern is that there are few power electronic devices like inverters that are rated for aviation, so magniX is developing those as well.

But airlines also have to consider how their ground operations will accommodate electrics.

Getting the most out of an electric drivetrain would require redesigning the aircraft around a new propulsion system — smaller wings, more motors, different aerodynamics. That in turn would unlock new approaches to air travel, like air taxis.

But it’s the retrofitted aircraft that will likely be the first to get off the ground with customers. Ganzarski said he expects Harbour Air to carry paying passengers by 2022.

“We’re really confident that from an engineering point of view, there’s no issues there. I really don’t see much downside at all,” McDougall said. “The things that we can’t control are the regulatory side of it, although we’re getting a lot of cooperation and interest from the FAA and Transport Canada.”

The airline industry and government regulators have spent decades making flying safe and affordable. However, the rules they’ve created are tailored to conventional jet and propellor-driven aircraft.

In the United States, the regulations from the Federal Aviation Administration, which regulates and certifies aircraft, are set in law. That gives them teeth, but it makes it harder for rules designed to govern piston engines and turbines to adapt to battery-powered planes, and regulators are reluctant to change them because they are unfamiliar with the technology and they are afraid of introducing new risks.

“Our ability to change the law to accommodate new technology is very poor,” said Pat Anderson, director of the Eagle Flight Research Center at Embry-Riddle Aeronautical University. “This is new to the FAA, so it’s pretty challenging.”

For example, the FAA has rules for how a battery has to be encased in a “coffin” inside an aircraft to contain a potential fire or leak. That might make sense for smaller batteries designed to power and back up the plane’s electronics, but not so much for a battery meant to fly the plane itself.

“The energy for a propulsive battery would be so much that it wouldn’t be a coffin; it would be a bomb,” said Anderson.

The FAA did not respond to requests for comment.

The FAA is trying to adapt, though. The agency is shifting how it comes up with rules for electric airplanes from federal regulations toward standards established by consensus from the industry. Experts in new technology can meet and vote on the requirements electric airplanes have to meet to be certified. But the process itself is new, so it might still take several years before the agency can come up with standards that make sense for electric aircraft.

However, when an electric commercial flight does take off for the first time with paying customers, it could start a revolution. “It will feel a little like Kitty Hawk, I think,” McDougall said.

Morning Brew, the business newsletter publisher for millennials, is in talks to sell itself to Busin...
The real reason we need more diversity in film criticism
Mitch McConnell hints he could block the next stimulus package
“He will be missed dearly”: Joe Biden and Barack Obama release statements on John McCain’s death
We’re underestimating the mind-warping potential of fake video
Join an all-star panel of critics to talk Princess Bride at the next Vox Book Club live event