Airlines are to blame in the debate over reclining plane seats 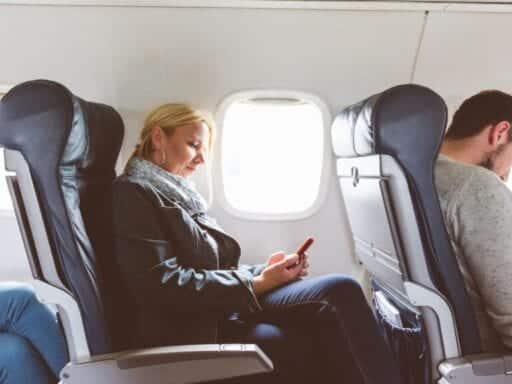 It’s probably not your neighbor’s fault that you’re so uncomfortable during a flight.

It takes roughly 15 minutes for a plane to reach its cruising altitude, which means that there’s a brief, uncertain period during each flight where I’m left wondering: Is the person in front of me going to recline their seat?

Usually they are, and there’s nothing I can do about it, unless I want to risk diverting my flight by literally fighting them. (Over the course of one week in August 2014, three different flights were diverted because fights broke out over a reclining seat.)

I am among the camp of fliers who never recline; when it comes to short domestic flights, reclining doesn’t provide a major difference in comfort for me. Still, plenty of debates have raged over fliers’ “right to recline,” since people are fervently defensive of their personal space and rights as passengers. It seems to be a never-ending cultural argument, during a time when more Americans are flying and airplane seats are the smallest they’ve ever been.

Even newsrooms are split. Former New York Times business columnist Josh Barro argued in 2014, “When I fly, I recline. I don’t feel guilty about it. And I’m going to keep doing it, unless you pay me to stop.”

Damon Darlin — Barro’s colleague at the time, who was as horrified by his opinion as I was — published an opposing article in favor of the Knee Defender, a nifty device (banned by some airlines) that prevents the person in front of you from reclining.

The previous year, Slate’s Dan Kois wrote that people who tilt their seats back are “pure evil” after he unsuccessfully asked the woman in front of him to partially un-recline her seat. The issue is still being debated now years later on Twitter, where people notoriously air out their travel woes.

reclining your seat back on a short flight: fair or foul?

If you recline your seat on a 1hr flight I hope your luggage goes missing.

Otw to L.A. guy I work with is in the seat in front of me so I think I’m in the clear for reclining leg room issues. This man who looked me dead in the face and said good morning with a smile had the nerve.. the AUDACITY to put his seat back damn well knowing how tall I am

Your discomfort isn’t entirely the fault of your fellow economy passengers, although they’re an easy target for quiet rage. It’s more the fault of the American aviation industry at large, which condemns us to crowded planes with limited legroom and high fares.

Plane seats have shrunk considerably over the past few decades as airlines attempt to accommodate a record number of fliers by maximizing space within an aircraft.

“Airlines are a business,” Debbie Carstens, a Florida Tech professor of aviation with a background in human-factors engineering, wrote to me in an email. “As much as airline companies value their customers’ experience, profits are vital to a company’s longevity.”

“Airlines are a business”

In a 2014 column for USA Today, travel writer Bill McGee dug through decades-old reports of airline seat size and compared them to today’s standards. (His analysis primarily applies to major airlines since budget carriers typically offer smaller seats that might not recline at all.) He found that American, Delta, and United Airlines offer in some aircrafts a seat pitch, or the distance between rows of seats, of only 30 inches in economy.

“In years past, 31 or 32 inches were the absolute minimums. What’s more, the roomiest pitch offered by the Big Three and Southwest (31-33 inches) are now tighter than they were at all four carriers in recent years, by anywhere from 2 to 5 inches.”

Economy seats are also a few inches narrower than they were in the 1990s, which is exacerbated by the fact that Americans are physically wider than they were two decades ago. The narrowest seats today are about 17 inches wide — two inches tighter than what were considered narrow in the 1990s, according to McGee.

On most domestic flights served by American, United, or Southwest, coach passengers are limited to a 2-inch recline. This year, Delta is testing a two-inch reduction on seat recline for one of its new fleets — a move that the airline claims will improve personal space (Delta is not adding seats or reducing legroom).

Besides size, some design experts say airplane seats are not well-designed for human bodies, which explains why they’re so uncomfortable. Think of an economy seat as a shirt that’s designed to be one-size-fits-all.

People with larger bodies than average are uniquely susceptible to strict airline policies, which could require passengers who don’t fit comfortably within their seat to purchase a second one. If a traveler doesn’t purchase accommodations ahead of time, there’s no guarantee an airline will let them fly if they don’t fit in their seat. There are also passengers with physical conditions who need to recline their seats for additional comfort, no matter how short the flight is.

Consumer groups have publicly voiced complaints about shrinking seats and crowded aircrafts to the Federal Aviation Agency. Under the FAA Reauthorization Act of 2018, the agency is expected to issue regulations that establish minimum dimensions for seat pitch, width, and length. The FAA is currently conducting a study with more than 700 participants for these standard dimensions, which lawmakers have criticized for its slow-moving pace.

Small seats have been the industry standard for decades now and that’s not likely to change, even with the upcoming FAA rules. Seat recliners (and those who despise them) aren’t likely to change their habits either.

It seems the only thing we can do is perennially argue about it, because, in the grand scheme of things, we’re powerless against the aviation industry. So what are you supposed to do the next time you board? I consulted Myka Meier, an etiquette expert and author of Modern Etiquette Made Easy. “Everyone has a right to recline,” she said, “but it’s about timing. Having a seat recline unexpectedly can be off-putting, especially if a person wants to have a drink or enjoy a meal.”

Regardless of whether your discomfort is the fault of the airlines or your fellow humans, Meier encourages passengers to be thoughtful and courteous in interactions with neighbors to reduce the likelihood of mid-flight scuffles.

“What I typically recommend is not necessarily asking because the person could just say no,” she told me. “You can just gently lean back and notify them that you’re about to recline.”

How California went from a coronavirus success story to a worrying new hot spot
Joe Biden wins the Tennessee Democratic primary
The Senate GOP’s leverage on the coronavirus bill is shrinking
Big Little Lies season 2, episode 2: “Tell-Tale Hearts” asks if families can survive their own secre...
Trump’s goal of keeping out low-income immigrants just got a big boost from the Supreme Court
Did America’s top spy release Russian disinformation to help Trump?