Al Franken needs to stop comparing his resignation to death 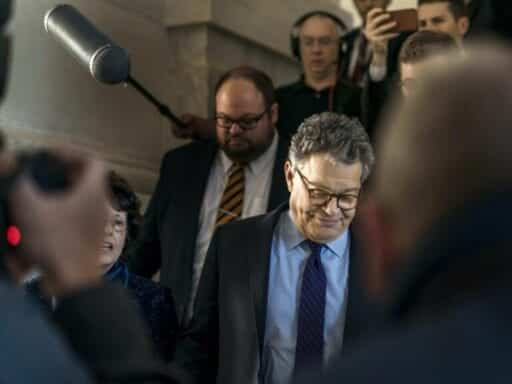 Share
Loading...
Al Franken leaves the Senate floor after delivering a speech announcing his resignation from the US Senate on December 7, 2017.  | Melina Mara/The Washington Post via Getty Images

He and his defenders are missing the point on #MeToo.

More than a year after he resigned from the Senate amid sexual misconduct allegations, Al Franken describes what happened to him as a kind of violence.

The junior senator from Minnesota, Franken announced his resignation in 2017 after eight women accused him of kissing or touching them in ways that made them uncomfortable. The first woman to come forward publicly, Leeann Tweeden, provided a 2006 photograph of Franken pretending to grab her breasts while she was sleeping.

Today, Franken is aware that it might be bad optics to paint himself as the wronged party. “I don’t think people who have been sexually assaulted, and those kinds of things, want to hear from people who have been #MeToo’d that they’re victims,” he told New Yorker reporter Jane Mayer.

But it’s clear from Franken’s comments in Mayer’s story, published online on Monday, that he does see himself as a victim. When he saw the photograph after Tweeden went public with her account, Franken says his first thought was, “Oh my God, my life! My life!” He describes another woman’s allegation as the one “that killed me.”

Though Franken challenges some aspects of Tweeden’s story, he doesn’t dispute that he posed for an inappropriate photograph. But he’s been treated unfairly, he and his supporters argue, by a #MeToo movement that doesn’t differentiate between more and less severe offenses.

Ever since the #MeToo movement entered its most public phase in 2017, critics have argued that it inappropriately lumps together different forms of sexual misconduct, demanding the same punishments for all. It’s a concern some supporters of the movement have voiced too. Lawyer Debra Katz, who has represented Christine Blasey Ford, put it this way to Mayer: “All offensive behavior should be addressed, but not all offensive behavior warrants the most severe sanction.”

Franken, however, has not actually faced “the most severe sanction.” He is not in prison; he has not been charged with any crime. He has lost his job in the Senate — a serious blow, clearly, to a man who by all accounts cared deeply about his work, but a common enough occurrence when you hold a high office that’s also subject to the vicissitudes of politics.

In fact, Franken’s attitude toward his own dismissal shows that while #MeToo advocates are often criticized for lumping together different offenses, accused men and their defenders also perform a kind of flattening — treating any and all repercussions for sexual misconduct allegations as equally severe. Whether someone loses his job, faces lawsuits, or is merely criticized publicly, it’s all the same — it’s all, in Franken’s words, “getting MeToo’d.”

And while it’s certainly true that different offenses demand different consequences, the conversation about justice for sexual misconduct survivors can’t move forward as long as all consequences — including social opprobrium — are likened to the death penalty.

In 2017, Tweeden, a radio host in Los Angeles, said in a statement that Franken had forcibly kissed her during a rehearsal for a USO skit in 2006. “He came at me, put his hand on the back of my head, mashed his lips against mine and aggressively stuck his tongue in my mouth,” she wrote. She also produced a photograph in which Franken is miming grabbing her breasts; she appears to be asleep.

After her statement became public, seven other women accused Franken of misconduct. Several said he had touched them inappropriately during photo ops, including one woman who said that he grabbed her buttocks while taking a picture with her at the Minnesota State Fair in 2010, when he was serving in the Senate.

As the allegations grew more numerous, Franken faced pressure from his caucus to resign, and announced in December 2017 that he would be leaving the Senate. According to Mayer’s story, he’s regretted it ever since.

Much of Mayer’s story is devoted to pointing out inconsistencies in Tweeden’s account, and to questioning her motives for coming forward — Mayer notes that the radio host has appeared on Fox News in the past, praised Donald Trump, and sided with “birthers” who question former President Obama’s citizenship.

Franken denies some aspects of Tweeden’s story, like her contention that he wrote a sketch especially for her so that he could kiss her, and that he stuck his tongue in her mouth. He does not deny having posed for the picture, and says that he feels “genuinely, genuinely bad” about it. As for the other women’s allegations, Franken describes them to Mayer as “out of the blue.” He says he never heard any complaints about his behavior with women until after Tweeden’s story broke.

Mayer writes that Franken “feels deeply sorry that he made women uncomfortable, and is still trying to understand and learn from what he did wrong.” But he also told her that “differentiating different kinds of behavior is important.”

Katz agrees. “The allegations leveled against Senator Franken did not warrant his forced expulsion from the Senate, particularly given the context in which most of the behavior occurred, which was in his capacity as a comedian,” she told Mayer.

“To treat all allegations the same is not only inappropriate,” she added. “It feeds into a backlash narrative that men are vulnerable to even frivolous allegations by women.”

Instead, Sen. Kirsten Gillibrand and others who called for Franken to resign were acting to protect their party from someone who was no longer able to serve it well. As Vox’s Matt Yglesias points out, Franken “sticking around under fire would have made it less likely that Doug Jones could have beaten accused child molester Roy Moore in the Alabama Senate special election. Not only would Moore in the Senate have been awful on its own terms, but a padded GOP majority would be more likely to have pushed through harmful cuts to the social safety net.”

Democrats in the Senate didn’t pressure Franken to resign because they thought the allegations against him were the same as the allegations against Weinstein or Trump. They pressured him to resign because his continued presence was bad for Democrats in the Senate. His resignation was painful for him, as he makes clear, and the loss of a career isn’t something to minimize. But Franken would be far from the first politician who had to leave office because his party lost confidence in him.

But lumping together different kinds of consequences is a problem too

The way Franken talks about his resignation, however, is telling. He tells Mayer that his therapist likened his experience to “what happens when primates are shunned and humiliated by the rest of the other primates.” Their reaction (and, presumably, Franken’s too), he said, is “I’m going to die alone in the jungle.”

Others, too, use language of death and dying. “Al deserved more of a process,” Sen. Angus King (I-ME) told Mayer. “I don’t denigrate the allegations, but this was the political equivalent of capital punishment.”

Comments like these are part of a larger trend in which powerful men and their defenders and supporters cast anything that happens as a result of a sexual misconduct allegation — whether it’s loss of a job or just public criticism — as akin to death or at least the complete ruining of a life. Louis C.K., for example, joked, “My life is over,” during a standup set after multiple women came forward to say that he had masturbated in front of them without their consent (C.K. says their accounts are true). Neither C.K.’s life nor his comedy career is over — he made the joke during one of many comeback appearances.

President Trump, meanwhile, complained that “a man’s life is in tatters” after Christine Blasey Ford said that Brett Kavanaugh had sexually assaulted her when both were in high school. Kavanaugh’s life was, arguably, not in tatters — indeed, he would soon become a justice on the Supreme Court.

Critics of #MeToo have argued that advocates are too quick to lump together different offenses. But defenders of accused men are also lumping things together, treating all consequences, even criticism that results in no career damage whatsoever, as equally severe and unacceptable. It all goes under the umbrella of “getting #MeToo’d” — an unfair process in which the man is the victim and the penalty is always death, even when the penalty is actually no penalty at all.

One thing that’s clear in Mayer’s story is the real pain Franken has gone through. He says he experienced depression after his resignation and took medication. His passion for his work in the Senate is obvious, as is the devotion of many who worked for him. There is room in the conversation around #MeToo for acknowledgment that the end of a beloved career is a genuine and painful loss.

But there must be room, too, to acknowledge that being asked to resign from the Senate is not the same as dying. It is not the same as being convicted of a crime or serving prison time. And to suggest that those calling for Franken’s resignation simply couldn’t tell the difference between inappropriate touching and serial sexual assault is a willful misunderstanding of reality.

The question of what justice looks like in sexual misconduct cases is a complicated one, something the country is still wrestling with even years after #MeToo entered its most public phase. But we get no closer to answering that question if we treat all consequences like they’re the same — or if we assume that people who want to see accountability for both greater and lesser offenses are just unable to tell them apart.

The Democratic platform calls for a bold remaking of the federal judiciary. It’s not nearly enough.
No, Trump hasn’t been the best president for Black America since Lincoln
Meet the medieval Welsh poet who wrote odes to her vagina
Israeli Prime Minister Benjamin Netanyahu wins party primary, weeks after indictments
The Army was finally considering renaming bases that honor Confederates. Trump quashed it.
Joe Biden is taking office amid a poverty crisis