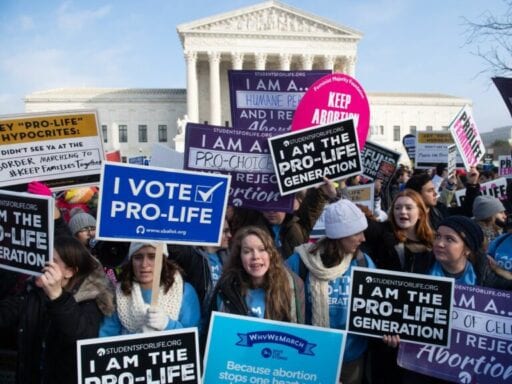 Though likely to be challenged in court, it’s the strictest anti-abortion law in the country.

Gov. Kay Ivey of Alabama on Wednesday signed into law a bill banning almost all abortions in the state, with no exceptions for cases of rape or incest.

Under the law, which is scheduled to take effect in six months, an abortion is only legal if the pregnant person’s life is at risk. A doctor who performs an abortion for any other reason could face up to 99 years in prison. Some say doctors will be too worried about criminal penalties to perform abortions even under those circumstances.

“It’ll be the most restrictive and extreme abortion ban in the country,” Monica Edwards, an Alabama native and fellow with the group Unite for Reproductive & Gender Equity, told Vox.

The law is likely to be challenged in court before it can take effect. In fact, that’s the goal of those pushing the legislation. This particular law is part of a larger nationwide shift in abortion politics. With President Trump in the White House and Justice Brett Kavanaugh on the Supreme Court, state legislators are passing stricter and stricter anti-abortion laws in an effort to get the Court to reconsider Roe v. Wade. And while abortion opponents once favored an incremental approach to restricting abortion, many have adopted a far more aggressive strategy in hopes of rolling back protections for abortion nationwide.

The Alabama bill has been in the national spotlight for weeks

The Alabama bill has been a lightning rod for national controversy from day one.

When the bill was first floated in March, Eric Johnston, an attorney with the Alabama Pro-Life Coalition who helped draft the bill, seemed to be pushing bizarre theories about human reproduction, saying that “a man and woman can have sex and you can take her straight into a clinic and determine an egg and sperm came together.” In fact, the most sensitive tests cannot detect a pregnancy until about a week after fertilization.

His comments were widely criticized. “Maybe not everyone learns the mechanics of early pregnancy in ninth-grade biology class,” wrote Lauren Kelley at the New York Times. “But it’s reasonable to expect that someone trying to legislate what pregnant people can do with their bodies would have a better grasp on the matter.”

Democratic Alabama state Rep. John Rogers, who opposed the bill, drew criticism in April when he argued that “some kids are unwanted, so you kill them now or kill them later.” He later clarified his comments, implying that he was accusing state lawmakers of hypocrisy for wanting to ban abortions but supporting policies that led to the deaths of Alabama residents.

When the bill reached the state Senate earlier this month, a heated debate broke out over whether to add an exception for rape and incest. Republicans removed such an exception without a full vote, evoking a shouting match on the chamber floor.

TAKE A LOOK: Lawmakers were discussing this bill that would have banned nearly all abortions. The Senate removed an amendment that added exceptions in cases of rape and incest. Right after a quick voice vote to strip the amendment chaos broke out. pic.twitter.com/rygpucN0s2

Ultimately, the Republican-controlled Senate passed the bill without the exceptions. In signing the bill on Wednesday, Gov. Ivey noted that it is all but certain to be challenged in court.

“No matter one’s personal view on abortion, we can all recognize that, at least for the short term, this bill may similarly be unenforceable,” she said in a statement. “Many Americans, myself included, disagreed when Roe v. Wade was handed down in 1973. The sponsors of this bill believe that it is time, once again, for the U.S. Supreme Court to revisit this important matter, and they believe this act may bring about the best opportunity for this to occur.”

The Alabama Women’s Center for Reproductive Alternatives, one of just three clinics that provide abortions in the state, plans to challenge the law, Dr. Yashica Robinson, an OB-GYN at the clinic, told Vox.

“It’s unconstitutional, and we plan to continue to fight,” Robinson, who is also a board member of the group Physicians for Reproductive Health, said.

The law is part of a larger effort to overturn Roe v. Wade

The Alabama law comes on the heels of a wave of “heartbeat” bills that ban abortion as soon as a fetal heartbeat can be detected, which can be as early as six weeks, before many people know they are pregnant. Meanwhile, lawmakers in Texas debated a bill earlier this year that would allow the death penalty for people who get abortions.

Georgia’s “heartbeat” law, signed by Republican Gov. Brian Kemp last week, has drawn concern over the possibility that it could lead to criminal charges for women who seek abortions or miscarry, though reproductive rights groups say they’re not sure if the law would ever be used in this way. The Alabama law specifies that patients cannot be punished for getting abortions, only doctors.

Several architects of recent anti-abortion bills have said they hope to challenge Roe v. Wade, but the backers of the Alabama ban have been more explicit than most.

Republican state Rep. Terri Collins, who sponsored the bill in the House, told the Washington Post that while she empathized with survivors of rape and incest, the lack of exceptions for those scenarios was necessary in order to force federal courts to intervene on the bill.

“What I’m trying to do here is get this case in front of the Supreme Court so Roe v. Wade can be overturned,” she said.

It’s not clear if the effort will succeed. As Clarke Forsythe, senior counsel for the anti-abortion group Americans United for Life, told Vox last week, the Supreme Court has signaled that it wants to move slowly when it comes to revisiting Roe.

When it does so, it will have many options — more than a dozen abortion cases are already one step away from the Court, and the justices could use any one of them to reexamine Roe. Many observers think it’s more likely that the Court will choose to weaken the protections in Roe, giving states more leeway to restrict the procedure.

In other words, the Alabama law still has a long road ahead of it. But even if it never fully goes into effect, it’s nowhere near the end of this strategy.

Correction: An earlier version of this story misstated the name of a fellow with the group Unite for Reproductive & Gender Equity. Her name is Monica Edwards.

Trump accuses Harley-Davidson of being 'first to wave the white flag' on trade
Jim Carrey returns to TV on Showtime’s Kidding. It’s a messy triumph.
The latest impeachment polling reflects America’s deep polarization
2020’s “extremely active” hurricane season, explained
Michael Cohen now wants to get out the vote
The astonishing effects of the shutdown, in 8 charts