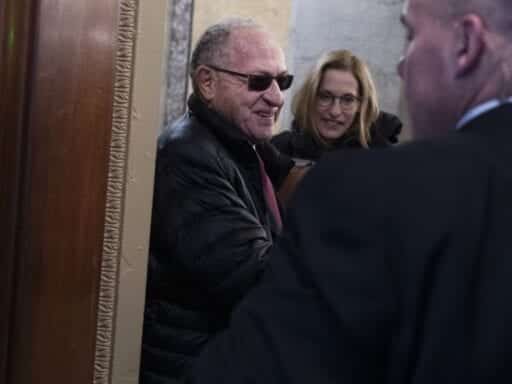 Trump’s lawyer argued that anything the president does to stay in power is unimpeachable, short of actual crimes.

One of the defenses presented by one of Trump’s lawyers during Wednesday’s portion of the Senate impeachment trial stood out from the others — big time.

That’s because it would give presidents almost unlimited power to pervert foreign policy into dirty tricks aimed at boosting their political prospects by defining anything they do to stay in office as part of the national interest.

In response to a Republican senator’s question about whether it’s true that “quid pro quos are often used in foreign policy,” Alan Dershowitz argued they are. But he then went a step further and made a case that even quid pro quos that most everyone would agree are unacceptable aren’t impeachable offenses.

“If a president does something which he believes will help him get elected in the public interest, that cannot be the kind of quid pro quo that results in impeachment,” Dershowitz said.

Trump attorney Alan Dershowitz: “If a president does something which he believes will help him get elected in the public interest, that cannot be the kind of quid pro quo that results in impeachment.” https://t.co/jKErQcS1Iy pic.twitter.com/zo4rL6Zbla

It would be a much harder case if a hypothetical president of the United States said to a hypothetical leader of a foreign country, ‘unless you build a hotel with my name on it, and unless you give me a million dollar kickback, I will withhold the funds.’ That’s an easy case. That’s purely corrupt and in the purely private interest.

But a complex middle case is, ‘I want to be elected. I think I’m a great president. I think I’m the greatest president there ever was. If I’m not elected the national interest will suffer greatly.’ That cannot be impeachable.

In other words, if the president thinks his or her reelection itself is in the public interest of the United States, then anything short of crimes he or she does to make that happen — including strong-arming foreign governments into announcing investigations into political foes — is justified.

It’s instructive to consider the sorts of things presidents could get away with if Dershowitz’s argument were accepted. And House impeachment manager Adam Schiff did just that immediately after Dershowitz spoke.

Schiff asked senators to consider a hypothetical situation in which Obama had instead asked Medvedev to open an investigation into Mitt Romney, his political opponent at the time, and threatened to impose sanctions on Russia if he didn’t.

Nobody would argue a request of that sort is acceptable. And yet by Dershowitz’s standard, it wouldn’t meet the bar for impeachment and removal.

Schiff points out that if Obama had asked Medvedev to investigate Romney on a hot mic, Republicans would’ve impeached him faster than you can say “emails” pic.twitter.com/wMmfuoR2L9

One could even argue that Trump’s conduct with Ukraine was more egregious than the Obama hypothetical, as Trump held up congressionally authorized military aid as part of his quid pro quo and didn’t go through the proper channels to do so. The US government’s top internal watchdog concluded earlier this month that the Trump administration “broke the law when it withheld military aid to Ukraine last year after Congress had approved its disbursal,” as my colleague Alex Ward explained.

Wow, Dershowitz is actually making the King Louis XIV argument right now! Trump is good for the country, so anything he does to stay in power is the national interest, even if corrupt or illegal. That’s the language of every king & dictator: I am the end and the means justify me.

Dershowitz’s argument illustrates a broader dynamic I wrote about earlier today: that with former National Security Adviser John Bolton now reportedly prepared to testify that Trump told him directly that the release of the Ukraine aid was conditional on the Ukrainian government agreeing to investigate the Bidens, Republicans are moving the goalposts from “quid pro quos are bad but Trump didn’t do one” to “quid pro quos don’t matter.”

Netflix’s Shadow and Bone is a muddled, joyless checklist of fantasy tropes
This week in TikTok: The influencer hair salon that’s under attack
The manufactured outrage over Barron Trump, explained
Giving Tuesday, explained
Why the US is one of only a few countries with no paid time off
Toward a better theory of identity politics