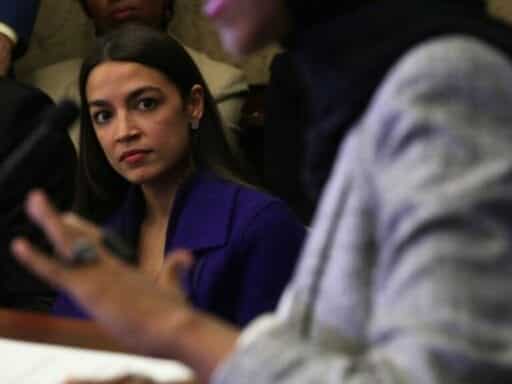 Share
Loading...
US Rep. Alexandria Ocasio-Cortez (D-NY) listens during an event at the US Capitol on May 20, 2019, in Washington, DC. | Alex Wong/Getty Images

A new bill would reward businesses that take care of their workers.

Rep. Alexandria Ocasio-Cortez (D-NY) wants companies to be “friendlier” to their employees. And she wants the federal government to reward companies for it.

The New York representative introduced a series of bills Wednesday aimed at creating what she calls a “just society.” That includes bills to update the federal poverty line, expand tenants’ rights, and to extend federal programs to all immigrants and former prisoners.

She also wants to make sure all taxpayer-funded government contracts go to businesses that treat their workers well. It’s called the Uplift Our Workers Act.

The bill would require the federal Office of Contract Compliance to create a scoring system that ranks businesses based on “worker friendliness.” Companies with the most worker-friendly policies would get the highest score, which in turn would give them an advantage in winning a lucrative government contract.

This is no small thing. More than 42,000 US businesses hold federal contracts, and all of them agree to follow certain rules to keep their deals with the government. The score is not another requirement; it’s more of an incentive. Just like the government gives preference to minority-owned or veteran-owned business, it would also give preference to businesses with the best workplace policies.

It’s a creative policy idea, and one that would certainly burden employers who are always trying to save on labor costs. But it’s comprehensive, and creates a big incentive for America’s largest companies to give workers the best benefits and perks available.

How the score works

Under the bill, the Department of Labor and the White House would develop the scoring system for contractors who do government work, which includes everything from making military uniforms to developing computer software.

Contract officers would score companies depending half a dozen factors, such as whether the business and its subcontractors have been penalized for violating any labor laws and whether the company can guarantee that its workers won’t work more than 40 hours a week to fulfill the contract, and whether they pay overtime to those who do.

Higher scores would be given to companies that pay all employees at least $15 an hour and provide them with at least seven paid sick days. They would also give preference to those who guarantee fair scheduling to allow “workers to effectively provide for their families financially and emotionally.” That means giving workers a monthly work schedule ahead of time, and a final schedule two weeks ahead of time.

Contract officers will also consider whether or not a company compensating employees who are “on call” and whether it offers extra work hours to current employees before hiring others.

Employers would also score higher if they guarantee at least 12 weeks paid family or parental leave and if they provide high-quality, subsidized health care. Extra points if they support employee unionizing efforts and have policies in place to analyze ethical, social, and environmental risks in their supply chain.

And here’s one of the most interesting things: It directs contracting officers to consider this score just as important — if not more — than the cost of the contract. That’s a dramatic shift, considering that some contractors probably cut back on labor costs to provide the lowest possible price in the bidding process. Making sure that taxpayers don’t overpay businesses for their services is a legitimate concern, but this bill would also ensure that taxpayer funds are also used to reward companies that treat workers well.

It’s a different means to the same end

Ocasio-Cortez is hardly the only member of Congress trying to get businesses to treat workers better as income inequality in the US has skyrocketed.

For example, Sen. Bernie Sanders (I-VT) introduced a bill that would raise the federal minimum wage to $15 an hour, which passed the House last month. Sen. Kirsten Gillibrand (D-NY) has sponsored the Family Act, which guarantees up to 12 weeks of paid family leave to workers. Rep. Rosa DeLauro (D-CT) introduced the Healthy Families Act, which would require businesses to provide full-time workers with at least seven days of paid sick leave. She also introduced the Schedules That Work Act, which guarantees predictable schedules for workers, or extra pay if they have to work irregular schedules. So far, Republicans in the Senate haven’t even debated these bills.

What Ocasio-Cortez’s bill does is create a huge incentive for businesses to do all of this. Sure, not every business is interested in a federal contract. But the 42,000 companies that do include America’s largest corporations, which employ tens of thousands of workers — like Google, Amazon, Microsoft, AT&T, and FedEx. And most importantly, they would only get a higher score if their subcontracted employees get the listed benefits, too — meaning Google’s cafeteria workers could get paid sick days as an incentive.

It may be easy to dismiss the bill as unachievable, especially coming from such a junior member of Congress. But Ocasio-Cortez has already managed to change the conversation about what is achievable on Capitol Hill. Just look at all the presidential candidates who endorse the Green New Deal.

A Supreme Court showdown over birth control got much messier Wednesday
Lower-income students are paying the price for the global laptop shortage
Study: Nearly a third of Americans believe a conspiracy theory about the origins of the coronavirus
Half of South Korea’s coronavirus cases are linked to a controversial religious organization
Coronavirus will also cause a loneliness epidemic
2 high-stakes ballot measures could boost wages for nearly 1 million workers