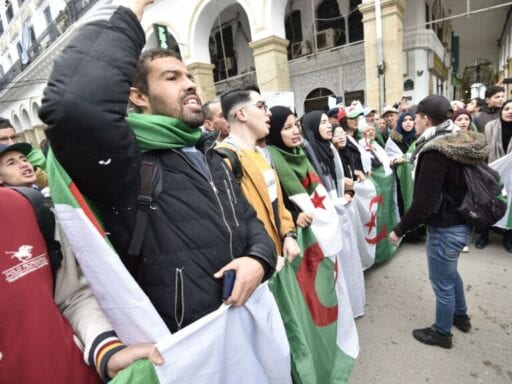 Share
Loading...
Algerian protesters hold national flags as they chant during an anti-government rally in the centre of the capital Algiers on November 12, 2019. | Ryad Kramdi/AFP/Getty Images

Algerians have been protesting since February. Here’s why you haven’t heard much about them.

An Algerian court on Wednesday sentenced over 20 protesters to several months of jail time for threatening national unity by waving a flag representing the country’s Berber minority at anti-government demonstrations.

The story made international headlines — and shined a spotlight on something most of the world had largely forgotten: that the peaceful protests that began in Algeria nearly nine months ago are still happening.

Since February 22, Algerians have been in the streets protesting for big structural changes to their government. They initially took to the streets to demand the resignation of then-President Abdelaziz Bouteflika. As Vox’s Alex Ward explained at the time, the 82-year-old president had led Algeria since 1999 despite suffering a stroke in 2013 that left him paralyzed and basically mute.

But despite being in poor health, “he remained in power — even if in name only — because Algeria’s military, business, and political elites wanted to keep their privileged positions.” Ward continued:

Those same elites announced earlier this year that Bouteflika would run for a fifth term. More than 1 million Algerians since February took to the streets to call for his ouster, a development that shocked Bouteflika loyalists. After initially making smaller concessions, including that he would cancel this year’s elections (which in Algeria are neither free nor fair), it seems he has finally caved to the people’s will.

After his resignation, Bouteflika’s associates faced a steady stream of corruption charges as the government attempts to clean house to regain the people’s trust.

Army Chief of Staff Ahmed Gaïd Salah turned on his former president and aligned himself with the initial protester demands that Bouteflika was no longer suited to rule. This allowed him to hold a significant amount of sway in the interim government, officially presided over by former Interior Minister Noureddine Bedoui and leader of the Senate Abdelkader Bensalah.

Salah called two elections — one on July 4 that was canceled and another for December 12 — and maintained that the army has no political ambitions. But Rochdi Alloui, an expert on North Africa, told me the elections are unlikely to put an end to the demonstrations unless a large portion of the country actually comes out to vote.

“The biggest question for Algeria is: Will this election solve the crisis?” Alloui said. “I think only if there is a large turnout for the elections. If not, it says that the Algerian people didn’t buy into what the candidates, and then the new president, were selling. If this happens, then the crisis will continue and it will actually worsen.”

But there’s perhaps an even bigger question that many in the country’s protest movement are asking right now: Why, in a world where protests in Hong Kong, Chile, Bolivia, Iraq, Lebanon, and elsewhere are closely followed by the international news media, are Algeria’s voices not being given the same attention?

“This is a media issue, really”

Dalia Ghanem, an expert on Algeria at the Carnegie Middle East Center in Lebanon who attended of some of the early protests, told me she’s disappointed with the media response to Algeria’s uprising.

“This is a media issue really,” Ghanem said. “They’re attracted by blood and violence, not the sight of people peacefully marching on the streets in civil protests. We all remember how the Yellow Vests [protesters in France] attracted so much attention, likely because of the destruction they brought.”

However, she said the sparse coverage doesn’t mean that Europeans and Americans are uninterested in the unrest.

John Entelis, a professor of political science at Fordham University who began studying and traveling to Algeria in the 1970s, offered a different explanation for why the media is less focused on Algeria.

“If you go down the list of [widely covered] protests, they’re all in countries accessible to the media,” Entelis told me. “Of course, journalists are able to travel [to Algeria], but it is very difficult for outsiders — journalists, visitors, tourists — to have access and understanding.”

There is perhaps a third reason — one that has more to do with the protest movement itself than the media.

Political movement in response to the protests has stalled, in part because of the disorganization of the protesters and the lack of a public figure to call on as a partner in realizing their demands. At first, this lack of organization made it hard for the authorities to marginalize the protesters, Ghanem told me, “but now it is a weakness.”

“Now, it is difficult for the protests to have a clear map going forward and also hard for them to be able to negotiate,” Ghanem said. “There will be a moment where the movement will need to either restructure itself or go with someone to steps forward.”

Khaldoun Khelil, a scholar at the Middle East Institute, said he understands why no one has come out to lead the protest, but thinks it is a big detriment to the demonstrators achieving any goals.

“It’s a double-edged sword,” Khelil said. “If anyone stands up and speaks up, those people disappear. When [the government says] there’s no one to talk to, it’s because those people have been arrested or processed.”

He continued: “I completely understand why there is no trust for anyone who’s been a part of the state, but I don’t know who is going to be able to step up and help them implement their demands. Without someone with deep knowledge of system to navigate it, the they’re basically asking for a failed attempt.”

Still, Algerians across the country — from the steps of the iconic “Grande Poste” post office in downtown Algiers all the way to the country’s border with Tunisia — continue to gather, mostly on Fridays, to demand a new political system.

When she traveled to a border town in March, Ghanem told me she saw protesters marching in a familiar nonviolent way. “They said: ‘We did it, we followed your model in Algiers,’” Ghanem said. “Even all the way out there, people were in the streets.”