All 12 Thai boys and their coach have been rescued 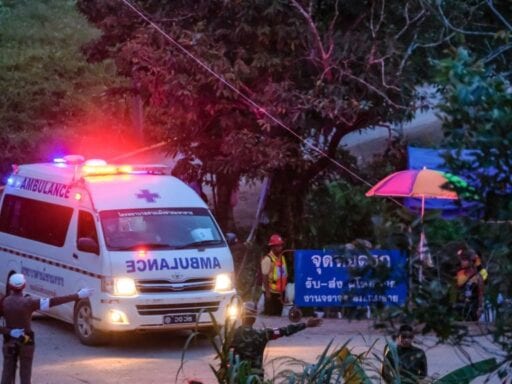 After three days, the rescue mission is complete.

All 12 Thai boys and their soccer coach have been rescued from the cave they’ve been trapped in for more than two weeks in northern Thailand. A team of expert divers on Tuesday finally completed their rescue mission, which started Sunday, to help guide the boys through 2.5 partially submerged miles to safety.

The mission hasn’t quite ended yet — a doctor and three Thai Navy SEALs still have to be brought out of the cave — but the successful rescue of the boys concludes a saga that’s been watched around the world.

On Saturday, June 23, a group of 12 boys between the ages of 11 and 16 went with their 25-year-old soccer coach to explore a cave in the Tham Luang Nang Non cave system. As they entered, heavy rain picked up, and the rising water trapped them inside. The group of 13 was missing for nine days before they were discovered by divers last Monday.

People in Thailand and around the world rejoiced when the group was found, but there was another problem: getting them out. Oxygen levels in the cave were dropping, making it risky to wait until monsoon season ends in October and water levels fall.

And so a rescue mission to get the team, nicknamed the Wild Boars, out of the cave began on Sunday morning, when 13 specialist divers and five Thai Navy SEALS were sent in to try to reach the boys and escort them out. The escape route is fraught: A former Thai Navy SEAL, 38-year-old Saman Gunan, died on Friday while trying to reach the group with oxygen.

The 18-day ordeal has captivated the world. When the boys were found a widely shared video showed them sitting calmly together. Their coach, who lived in a Buddhist monastery for a decade, reportedly taught them to meditate in the cave to keep them calm.

Vox’s Radhika Viswanathan has a full explainer on the situation.

On Sunday, four boys were freed, and after a pause on Sunday evening, a second phase of the mission commenced on Monday, during which four more were retrieved. Finally, on Tuesday, the rest of the boys and their coach got out.

The condition of all of the boys and their coach is not fully known, but a senior health official told the Associated Press that the eight boys brought out during the first two days of the mission were doing well and in good spirits.

Republicans showed why Congress won’t regulate the internet
Congress is on track to avoid a government shutdown — as long as Trump doesn’t get involved
Myanmar’s coup has no heroes
Democrats aren’t ruling out physical barriers in a border security deal
Stay home with Curbed: A guide to loving the space you have
17-year-old charged with murder in Kenosha, Wisconsin, shootings