Am I watching Westworld wrong? 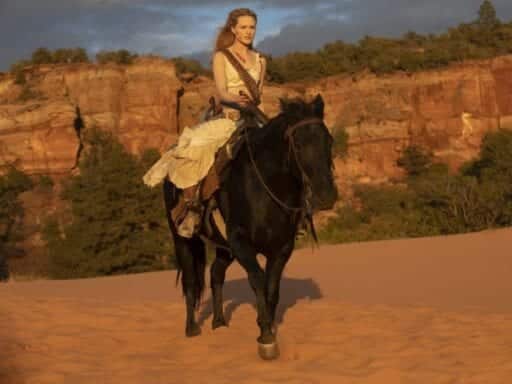 Like a video game, Westworld only works when you “play” it.

Many weeks, after my recap of Westworld posts on Sunday nights, I hear from readers.

Sometimes, those readers want to correct something I’ve gotten wrong, which is always welcome. But sometimes, those corrections aren’t actually correcting anything — they’re more trying to win me over to their theory of what the Man in Black is up to, or what Westworld is supposed to be, or which planet the series takes place on.

“You missed…” these emails and tweets will often start, before launching into several paragraphs of explanation of how some tiny detail in the costume or production design reveals the truth about the Delos Corporation’s secret plans or what have you.

But I don’t know that I “missed” anything, so much as I don’t share these particular readers’ theories about what’s going to happen. I tend to let the show present things to me as they happen, rather than trying to guess where it’s going. It’s just how I’m wired.

I want to be clear: I’m not complaining about this. I love hearing from readers about anything I write. But the sheer number of these responses has made me think that I might be watching Westworld all wrong — or, perhaps, that it’s such a thin, thematically empty show that the only meaning it has comes from that which you bring to it. But is that on the show? Or is it on me?

The feeling I often get from watching Westworld season two — which I should state that I have mostly enjoyed as a viewing experience — is that of HBO offering a spin not on Lost, the ABC drama that from 2004 to 2010 provided a similarly deep and compelling mythology for fans to spend endless time theorizing about, but on the famous Lost recaps of Entertainment Weekly’s Jeff Jensen. Jensen picked apart Lost methodically, digging deep into everything onscreen, in hopes of figuring the show out, of finding a grand, unifying theory of what was going on that would become the show’s ultimate explanation.

This was a key part of watching Lost for many, many viewers. Trying to figure out how all of the pieces fit together by hashing out the clues with your friends online became almost a bigger pastime than watching the show itself, to the degree that many series ABC aired in the time slot after Lost struggled in the ratings because so much of the fan base immediately turned to the computer to talk out the most recent episode. Jensen’s recaps became a central hub of that particular Lost experience.

But Lost still largely worked as a passive viewing experience. You could be someone completely detached from the show’s mythology and larger questions and still be interested in the adventures of the assorted characters on the Island. And part of the show’s mega-hit ingeniousness stemmed from how those two approaches to watching the series lived parallel to each other until its very end, when the writers had to choose whether to put their emphasis on the character track or the mythology track. (They chose the former, and, uh, it made some people angry.)

But because the character track was as strong as it was, Lost has continued to be essential viewing to this day. Now that you know a lot of the show’s biggest questions will receive lackluster, easily predictable, or nonexistent answers, it’s easier to tap into everything else about the show that was brilliant and compelling.

So what I mean when I say Westworld feels like an adaptation of a Lost recap is that, for better or worse, it is less a character-driven drama than it is a mystery and mythology-driven drama. Yes, it feints toward giving characters revelatory arcs, and because those characters are played by such great actors, you almost believe them.

But the second half of the second season has largely frozen its main characters in place for several episodes, looping and darting through time in a seeming effort to distract from how little is actually going on. It is a show where things are always about to happen, where the characters and the plot all stand on a precipice, waiting for some revelation to give them meaning, in their own eyes and in ours.

Take, for instance, the second season’s justifiably acclaimed eighth episode “Kiksuya,” which is the rare episode of the show to be more character-centric than mystery-centric. Focusing on the background character of Akecheta (Zahn McClarnon), part of the mysterious Ghost Nation tribe (a group of robotic Hosts created to resemble Native Americans), “Kiksuya” follows the character’s journey toward consciousness and his attempts to save his now lost love from her imprisonment by those who run Westworld. It’s heartbreaking and melancholic, and it stands as a testament to the idea that Westworld could be a more traditional and straightforward drama if it wanted to be — it maybe just doesn’t want to.

What’s more, “Kiksuya” displays most of Westworld’s other tendencies throughout. It’s an hour about Akecheta, sure, but it’s also an hour about using his character to fill in various gaps in the show’s backstory. His character’s goals aren’t particularly deep (he wants to find his lost love), and his psychological journey, while interesting, doesn’t rise to the level of genuinely compelling.

Instead, he goes on a guided tour of seeming plot holes in order to close them up. Much of the dialogue in the hour takes the form of a lengthy monologue from Akecheta that mostly tells us things that happened, rather than filling in who he is.

Westworld clearly doesn’t want to be a typical drama. But, then, what does it want to be?

None of this is meant to be a complaint. “Kiksuya” very evidently works on its own terms, and it doesn’t need to work on the terms of other, more traditional TV dramas to be effective. But it helped me understand why I can find Westworld interesting and engaging, but rarely deep, compelling, or insightful.

In the absence of a more traditional narrative, the show largely exists as possibility space, as a canvas the viewer is invited to sketch their own thoughts onto. Creators Jonathan Nolan and Lisa Joy have provided a series of suggested lines to color within, but you are simultaneously invited to color outside of them, to let your crayons mark up the floor, or to burn the book entirely. Or, put another way, most TV shows try to meet the viewer halfway; Westworld asks if you can come over to its place, then asks you to help it move.

This is appropriate, in some ways. On its most basic level, the “story” of Westworld involves a bunch of video game characters realizing they’re video game characters. And like a video game, Westworld requires a “player” to become its best possible self. You can watch it passively, trying to engage with it on the basis of its characters or plot, but even there, the show throws up roadblocks to interpreting it as anything other than a puzzle. Why, for instance, is season two told out of narrative sequence, other than an insistence on the part of the show that you should have to do at least a little work to enjoy it?

I vacillate on whether this need for a “player” makes Westworld brilliant or bullshit. Most of the show’s ideas about philosophy, religion, psychology, and technology are half-assed and better expressed in other science-fiction texts (like, say, the Battlestar Galactica remake, the Blade Runner films, or basically any Neal Stephenson novel).

But inviting viewers into the show’s own creative process and asking us to help complete the half-finished picture means that the show can never be entirely pinned down, which is exciting in its own way.

It not only gives the impression that it’s about to do something brilliant, which will imbue it with deeper meaning, but that you might be the one to reveal the cornerstone that gives shape to the whole structure. And yet most of the revelations the show has hidden from viewers have been easily guessed by its most dedicated fans, and once they’ve been revealed, they accomplish very little. They exist solely to keep mystery flowing.

Westworld, then, is best understood as a show about being the TV show Westworld. It devours itself in ever more intricate, ever more metatextual circles, and subscribing to the show’s subreddit feels not like a fun value-add but like something that’s compulsory. It’s smart and not smart simultaneously, meaningful and empty within the same shot. I sometimes think about pointing at it and shouting that it’s naked, but then, in my mind’s eye, I see the most beautiful robe.

SNL tests Trump’s negotiating prowess in ‘Deal or No Deal’: Government Shutdown Edition
How the Carr Fire became one of the most destructive fires in California history
Trump is starting to pressure red-state Democrats to support his Supreme Court pick
Why your parents use emojis, periods, and all-caps all wrong
Alexandria Ocasio-Cortez wins an upset and her supporters want the media to say her name
The Pittsburgh synagogue shooting comes amid a yearslong rise in anti-Semitism