Amazon and Walmart want you to think they always have the best prices. A smaller competitor is showing otherwise. 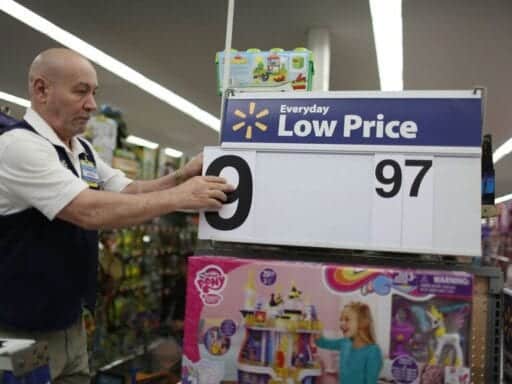 Jeff Yurcisin spent 14 years rising up the ranks of Amazon.

But now, as the president of discount shopping site Zulily, he’s trying to expose one of Amazon’s Achilles’ heels.

Zulily is introducing a feature on Wednesday that aims to show online shoppers how much cheaper its prices are than Amazon’s and Walmart’s.

The comparison will show up on thousands of Zulily product pages each day, as long as the exact item is also sold by either Amazon or Walmart.com. In testing, Zulily says it found it had a lower price than the two large competitors 97 percent of the time.

One caveat: the majority of items that Zulily sells are still unique goods that aren’t sold on the bigger competitors’ sites, so shoppers will still often land on a Zulily product page that doesn’t have a comparison. And another: Zulily’s shipping fees start at $5.99, while Amazon and Walmart customers can get free shipping on certain orders.

Still, the move is a bold one since it’s unclear how Amazon or Walmart will respond. They could choose to start price-matching Zulily or, worse, they could undercut the smaller competitor simply to prove a point.

Either way, the move comes at a critical juncture for nine-year-old Zulily, which has struggled to regain the popularity and relevance it held as an e-commerce darling that was once worth $9 billion; it sold to QVC owner Qurate Retail Group for just $2.4 billion a short time later. More recently, Zulily carried out layoffs this summer, and revenue shrank 13 percent in its most recent financial quarter.

The company originally rode the wave of consumer interest in flash-sale and daily-deal sites, which offered steep discounts to drive impulse buying during limited-time sales. Zulily’s target audience was moms, and shoppers who originally gravitated to the idea of discovering new clothing and other items almost every day that were marked down as much as 70 percent.

But models like Zulily’s became less popular as tons of new deal sites flooded consumers’ email inboxes, while competition and a post-Recession economic turnaround led to less quality, excess inventory to go around.

As Zulily grew, it was forced to supplement the core of its catalogue, which came from boutique brands, with goods from large, national brands to beef up its product catalogue for a larger customer base.

While that meant Zulily started to carry more goods that bigger competitors sell, it has worked to at least beat them on price. How? The brands Zulily works with are often willing to offer steep discounts in exchange for unloading excess inventory or simply selling a large volume of items in a very short period of time.

Zulily also saves on shipping costs by not offering delivery speeds that are anywhere close to Amazon’s or Walmart’s.

Yurcisin joined Zulily from Amazon in the summer of 2018. At Amazon, he most recently oversaw the company’s efforts to develop and launch its own fashion brands.

Yurcisin is not the first former Amazon executive to go after the Seattle-based giant’s prices. Marc Lore worked for several years at Amazon after selling Diapers.com’s parent company Quidsi to Jeff Bezos’ company for $545 million. But when he launched a competitive site, Jet.com, a few years later, his shopping site displayed Amazon’s higher prices front and center.

Within a few months, though, Jet’s business model had changed and it was forced to scrap the practice.

As our April book club pick opens, New York City is born. What happens next?
Millennials have dinner parties, they just don’t call them that
Can a pair of jeans kill the coronavirus?
As crowds flock outdoors for Memorial Day weekend, government officials stress caution
Why countries interfere in elections
The 2020 summer Olympics will be postponed due to coronavirus, says IOC official