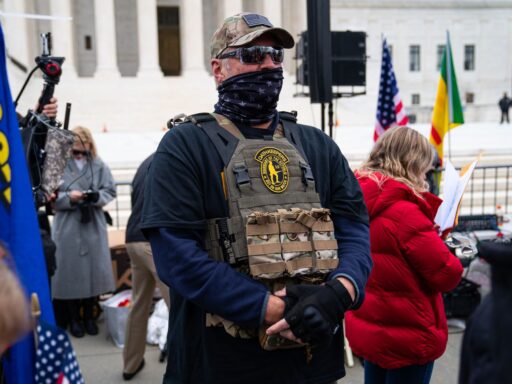 Merchandise sporting the names and logos of the Oath Keepers and Three Percenters can be found on Amazon.

Amazon said on Tuesday that it had begun taking down product listings for merchandise featuring the logos of two right-wing militia groups, after Recode reported on Monday that some corporate employees were pressuring the company to do just that.

In the weeks leading up to the January 6 storming of the US Capitol, Amazon employees questioned the company about apparel featuring the logos of two groups — the Oath Keepers and the Three Percenters — available for sale on Amazon. And in the wake of the insurrection, which was carried out by some rioters wearing gear from at least one of the groups, some Amazon employees demanded the company take the listings down.

“After yesterday, any products advocating for the overthrow of the US government should be removed from the site,” one longtime Amazon employee wrote on an internal email thread.

As of Monday, Amazon continued to allow third-party merchants to list for sale shirts, hats, and other gear featuring the names and logos of the two organizations. And, according to product listings viewed by Recode, many of the items appeared to be stored in, and shipped out of, Amazon warehouses as well.

An Amazon spokesperson, Cecilia Fan, declined to comment on Friday. Spokesperson Mary Kate McCarthy told Recode on Tuesday that Amazon had begun removing merchandise from these groups. She did not immediately respond to a question about the reasoning for the removal.

Fan initially provided a link to Amazon’s offensive product policy last week, seeming to suggest the merchandise didn’t break Amazon’s rules. The policy says, in part, that “Amazon does not allow products that promote, incite or glorify hatred, violence, racial, sexual or religious intolerance or promote organizations with such views.” The policy also says Amazon will remove items related to “terrorist organizations.” Neither group has been labeled a terrorist organization by the US government.

Following reports of its inaction, Amazon said on Monday it was in the process of removing some products related to the QAnon conspiracy theory group from its shopping site.

The Oath Keepers and Three Percenters are two of the main right-wing militia groups in the US that were founded in the wake of Barack Obama’s 2008 election. “While [The Oath Keepers] claims only to be defending the Constitution, the entire organization is based on a set of baseless conspiracy theories about the federal government working to destroy the liberties of Americans,” according to the Southern Poverty Law Center.

Despite their anti-government stances, both groups have gravitated to President Trump as the one federal official who will protect their rights. In the summer of 2020, a self-proclaimed Three Percenter leader in Wisconsin said he had hosted rifle training for some of those who were later arrested in a plot to kidnap Michigan’s Democratic governor. A Three Percenter leader in Washington state also called on members to occupy the state Capitol building but reversed course after the riot at the US Capitol last week.

According to published reports, Three Percenter flags were seen at last week’s rally in Washington, DC, that devolved into an insurrection. Frontline and ProPublica also reported on a group of men in body armor spotted at the Capitol. “The eight men, whose movements were captured on video, were identified by ProPublica and Frontline as members of the Oath Keepers, a long-standing militia group that has pledged to ignite a civil war on behalf of Trump,” reads the report. “Members of the group joined the protesters and insurrectionists flooding into the Capitol. Footage from later in the day shows Oath Keepers dragging a wounded comrade out of the building.”

The internal controversy at Amazon comes as other e-commerce platforms have removed stores or listings in the wake of the Capitol attack. Shopify, the large e-commerce software maker, shut down two online stores affiliated with President Trump last week. And later, eBay removed listings for merchandise bearing the same “MAGA Civil War” phrase that adorned the shirts of some Capitol rioters. Still, eBay, just like Amazon, sells merchandise bearing the name and logos of the Three Percenters and Oath Keepers.

The tech giant’s Amazon Web Services division also cut off web-hosting support this past weekend for Parler, the conservative social media platform, which was also kicked out of the Apple and Google app stores for failing to adequately police calls for violence from its users. And the Wall Street Journal reported on Sunday that Stripe, the popular payment platform for businesses, would no longer process card payments for Trump’s campaign website.

Update, January 12, 11:30 am ET: This story was updated with Amazon’s removal of right-wing militia and QAnon merchandise.

Read: House conservatives introduce a resolution to impeach Rod Rosenstein
Poll: Biden is ahead in Iowa, but Warren and Buttigieg are coming up strong
Elite law professors are brushing politics aside to support fellow elite Brett Kavanaugh. That’s ine...
Vox Sentences: Will Assange face trial in the US?
2 possible reasons the pipe bombs didn’t explode
Brett Kavanaugh’s high school calendar doesn’t prove anything — except that he partied