Amazon is selling its futuristic cashierless technology to other stores 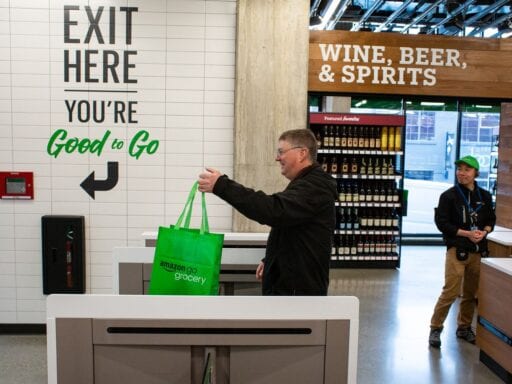 Share
Loading...
If Amazon gets its wish, shoppers at other retailers will eventually be able to “just walk out” like at the Amazon Go Grocery store in Seattle. | David Ryder/Getty Images

Millions of cashier jobs could be at risk.

Last month, Amazon showcased its cashierless, no-checkout-line technology in its own full-size grocery store. Now, Amazon says it wants other retailers to use it, too.

On Monday, Amazon announced it had begun selling its so-called “just walk out” technology — which combines ceiling cameras, computer vision, and weight sensors — to other retailers, in a move that could someday impact the millions of Americans who hold cashier jobs today. The company told Reuters it had already signed several deals but did not disclose with which retailers or the cost of its system.

“Do customers like standing in lines?” Amazon VP Dilip Kumar asked rhetorically in an interview. “This has pretty broad applicability across store sizes, across industries, because it fundamentally tackles a problem of how do you get convenience in physical locations, especially when people are hard-pressed for time.”

Amazon’s talks with other retailers — from airport vendors to stadium concession operators — have been reported on for months, but this is the first time the company has confirmed its intentions. Those previous reports, plus a widespread assumption that Amazon would eventually sell or license it like it did with the cloud computing technology it now sells to others through Amazon Web Services, has led to a burgeoning industry of startups trying to sell similar tech to retail stores.

One of them, called Standard Cognition, says it has already retrofitted three stores with no-checkout-line technology for a US retailer and that it will announce the retailer this spring. Other startups like Grabango and Trigo have also received investments from venture capitalists to pursue similar checkout technology using computer vision software. One of their pitches to retailers is that they won’t compete with them the way Amazon might, so they can trust that their in-store shopping data won’t be weaponized by a competitor. 7-Eleven has also started testing its own checkout-free technology. It’s still unclear whether these technologies will drive enough new business for retailers to justify the cost, or how exactly changes in staffing for these stores will play into the economics.

But taken together, these innovations could have the power to upend cashier roles, which number more than 3.5 million in the US today. Cashiers could become obsolete as Amazon opens more Go stores and its competitors selling similar technology succeed in signing up other retailers, too. But not surprisingly, Amazon’s FAQ page makes sure to mention how stores that purchase its technology will still need to employ workers to do things like stock shelves and greet shoppers as they enter and exit, even if they eliminate cashier work along the way.

Outfitting other stores with customer tracking and checkout technology could also provide Amazon with vast amounts of data on the shopping habits of consumers outside of Amazon’s digital and physical walls. But it seems unlikely many retailers would work with Amazon if it utilized their customer data for Amazon’s own business. As company executive Dilip Kumar told Reuters, “We prohibit the use of Just Walk Out technology data for anything other than supporting Just Walk Out retailers.”

Amazon unveiled this technology at its first Amazon Go convenience store, which opened on the ground floor of its Seattle headquarters in January 2018. Since then, the company has opened more than 20 Amazon Go stores, mainly in big cities like Seattle, San Francisco, and New York City. The original model is like a cross between a 7-Eleven and a Pret a Manger sandwich shop, selling sandwiches, salads, and ready-made meals and snacks to on-the-go professionals and workers in areas with lots of office towers.

In Amazon’s stores, shoppers scan a special Amazon Go smartphone app at turnstiles on the way in, and minutes after exiting their accounts are charged for the goods they grabbed. (Amazon says its Go stores can now accept cash transactions as well, but a shopper needs to notify a store worker to make that happen.) Customers that shop at other retailers that eventually use Amazon’s technology will need to insert their credit card into the gated turnstile instead of scanning an app. It’s unclear how those retailers will deal with laws in some states that require all stores to accept cash.

These trans women are taking states to court for the right to legally change their names
How Google transformed from a quirky tech startup into a global behemoth
Republicans don’t want to acknowledge Trump’s rhetoric is fueling political divisions
The incredibly damning Ukraine texts from State Department officials, explained
Decades of tensions between Minneapolis police and Black communities have led to this moment
Pennsylvania Democratic lawmakers accuse their GOP colleagues of secretly exposing them to coronavir...